Do we have a new album out? No, not exactly. But is it new to you? Possibly.

Due to the fact that our latest album Songs of Deliverance has only been available on Bandcamp until now, you may not have realized this recent compilation of songs even existed. If that’s the case, we hope to remedy that right now. Songs of Deliverance is now available on pretty much all the major streaming platforms—Amazon, iTunes, Spotify, etc.

So what is Songs of Deliverance?

After completing multiple versions of the first thirty Psalms of Scripture in three volumes, My Soul Among Lions began working on various song commissions, completing some unfinished songs, and even got to work on some of the Psalms from the 31–40 set. After a couple years of work on that, we thought we would put it together as a token of our appreciation for our Patreon supporters (we no longer use that platform, in case you are wondering). So we put together a homemade, hand-stamped album and sent it out to our supporters. We called it Songs of Deliverance because deliverance ended up be the general theme throughout many of the songs. But really, that is the theme of so many Psalms and the theme of the one who walks with the Lord who has been delivered from sin.

Though this album has been available on Bandcamp for some time, it is now FINALLY available pretty much everywhere and we wanted to let you know about it. Below are some links to help you out. (Physical copies are only available through Bandcamp and come with a digital download.)

Check it out, buy some copies, and send some gifts to those who you think will appreciate it! Happy listening. 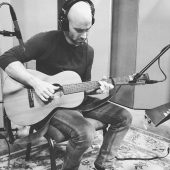 Philip Moyer serves as pastor at Trinity Reformed Church in Bloomington, Indiana, where he leads worship, the choir ministry, and high school youth group. He is also a member/songwriter of My Soul Among Lions.