The Grace of Shame: Al Mohler reverses himself again—this time on reparative therapy… 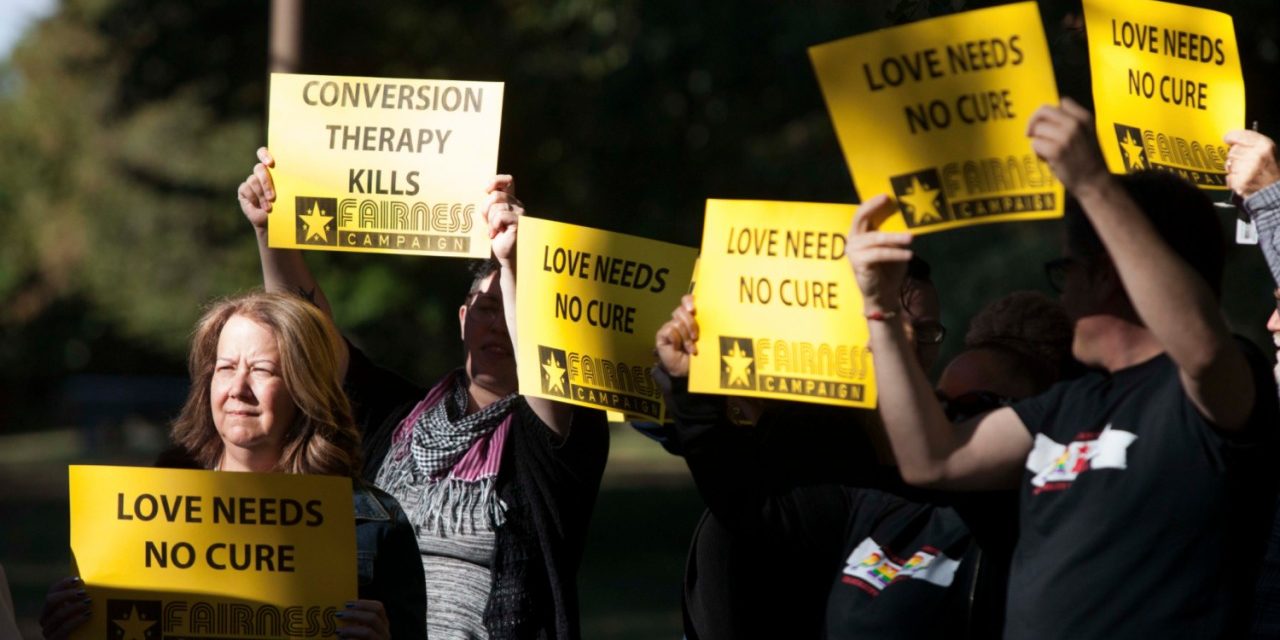 As David’s time to die drew near, he charged Solomon his son, saying, “I am going the way of all the earth. Be strong, therefore, and show yourself a man.”  – 1 Kings 2:1–2

“Reparative therapy” goes by many names, including “conversion therapy,” “orientation therapy,” and even the wordy “sexual orientation or gender identity change efforts.” Regardless of the label, it refers to counseling that helps to heal a man’s (or woman’s) sexual dysphoria to the end that his mind, heart, and body are at peace with each other sexually.

So which of these would a reasonable person think is being criminalized across our nation right now: the counseling that helps men and women to be the men and women God made them, or the surgery and drugs that mutilate their manhood and womanhood?

But before we get there, let’s examine the recent declaration by a certain Christian seminary president and one of his professors that they oppose “reparative therapy.”

The goal of Reparative Therapy is heterosexuality. . . .

This goal is not one that biblical counselors can embrace. The Bible never declares that heterosexuality is the goal of a full and contented life. . . .

. . . The Holy Spirit will not give his grace to pursue goals not prescribed in Scripture.[1]

Yes, you read it right. The Holy Spirit will not bless pastors working at the request of Christian parents to help their children love and live the sex God made them, and it’s because the Bible never calls us to identify with, love, and live the manhood or womanhood God made us.

We’ve spent decades ministering to souls who grew up in our sexually debauched world, many of those years as pastors in a sexually debauched community dominated by a major public research university. And we have never heard anyone—not even the most rabid feminist or godless sodomite—say anything as inane as suggesting that Scripture doesn’t command and commend heterosexuality.

Yet the sexual revolutionaries are demanding that Christians agree to the criminalization of counseling that condemns homosexuality and commends heterosexuality. Many church leaders feel pressure to raise the white flag, but how to pull it off without everyone seeing the fear in our eyes and trembling of our hands?

Maybe all it will take for us to get ahead of this tidal wave of opposition is for us to say we oppose the same thing the homosexualists oppose. So let’s reverse ourselves on homosexual orientation and say it’s a real deal, then reverse ourselves on heterosexual orientation and say we repudiate any counselor or pastor who works with any soul to embrace it.

Feeling the need to batten down the hatches on their bald-faced lie, these men then take the name of the Holy Spirit in vain by declaring, “The Holy Spirit will not give his grace to pursue goals not prescribed in Scripture.” What higher authority could you appeal to in order to scare the simple away from counseling that leads homosexuals to embrace the heterosexual identity God gave them?

We’ll return to the response of Christian leaders. But first, let’s examine exactly what we are facing from the world as it attempts to outlaw this practice.

What unbelievers (and increasing numbers of believers) are committed to, sexually, is the inalienable right of every boy and girl, man and woman, to choose their “gender identity” without respect to the sex God made them. This is the simple reason our nation is in the process of criminalizing sexual orientation therapy everywhere. Christian counseling that calls boys and girls, men and women, to accept and live the sex God made them is a stake through the heart of our national gods.

By the end of 2016, Oregon, Illinois, New York, New Jersey, Vermont, DC, and California, as well as Seattle, Miami Beach, Miami, West Palm Beach, Pittsburg, Toledo, and Cincinnati had laws against reparative therapy, with legislation pending in many other cities and states. At this early stage, bans are limited to the treatment of minors, but this will change.

WHEREAS, the City of Cincinnati has a compelling interest in protecting the physical and psychological well-being of minors, including lesbian, gay, bisexual and transgender youth and in protecting its minors against exposure to serious harms caused by sexual orientation change efforts . . .

BE IT ORDAINED by the Council of the City of Cincinnati, State of Ohio: Section 1. That the Council hereby finds that being lesbian, gay, bisexual or transgender is not a disease, disorder, illness, deficiency, or shortcoming. . . .

“Sexual orientation or gender identity change efforts” means conversion therapy, reparative therapy or any other practices by mental health professionals that seek to change an individual’s sexual orientation or gender identity, including efforts to change behaviors or gender expressions, or to eliminate or reduce sexual or romantic attractions or feelings toward individuals of the same sex . . . .

Whoever violates Section 769-3 shall be subject to a civil fine of $200.00. Each day in violation constitutes a separate offense.[2]

Snopes.com defends Cincinnati’s law by claiming it does not make it illegal for a Christian counselor to read the Bible to a client.[3]

Nowhere does the code grant any exception to Christian counselors, nor does it contain any exemption for the reading of the Word of God. Thus, Christian counselors who read their religion’s condemnations of effeminacy, sodomy, and lesbianism to a minor with sexual dysphoria or same-sex attraction are breaking the law and risk being assessed a fine of $5,000 per month and the loss of their license to practice.

Theoretically, these laws haven’t yet banned Leviticus, Romans, or 1 Corinthians from being read from the pulpit of a church in the privacy of the church’s sanctuary Sunday mornings, but a growing list of states and cities have now made it a criminal act for Christian counselors to call children to listen to Scripture and obey God by living faithful to the manhood or womanhood He gave them.

That’s the issue we’re facing. Now back to the Christian response to it.

On October 5, 2015, the Southern Baptist Theological Seminary in Louisville, Kentucky, was hosting a national conference of the Association of Certified Biblical Counselors (ACBC), and a group of forty homosexualists calling themselves the Fairness Campaign picketed the seminary campus. The protesters carried signs that read, “Love Needs No Cure,” and, “Conversion Therapy Kills.”[4] 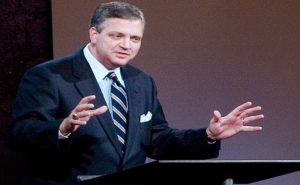 Southern’s president, Dr. Albert Mohler, and one of its faculty members (also serving as ACBC’s executive director) called a press conference to tell the media that these protesters had misunderstood them. Both Southern and ACBC are opposed to reparative therapy, they told the reporters.[5]

Dr. Mohler and ACBC’s executive director seemed to be in agreement with Cincinnati’s city fathers who declared that “being lesbian, gay, bisexual or transgender is not a disease, disorder, illness, deficiency, or shortcoming.” They were making common cause with them in denouncing therapists and pastoral counselors who “seek to change an individual’s sexual orientation or gender identity, including efforts to change behaviors or gender expressions, or to eliminate or reduce sexual or romantic attractions or feelings toward individuals of the same sex.”

Across the nation, this is the rationale being used to criminalize the reparative therapy these men repudiated at their press conference.

As state legislators and city councils around the country pass laws criminalizing sexual orientation therapy, this protest (and the response to it) is a straightforward attempt to stop Christians from calling gays and lesbians to flee their sin. Once more, let us put it plainly: those writing and passing these laws are criminalizing any call to repentance. What they are opposing is the very ministry of the Apostle Paul which allowed him to write this to the Christians in Corinth:

Way back in 2004, Dr. Mohler was unequivocal in his condemnation of the APA’s attacks upon religious freedom:

The APA has become an organizing center for the homosexual movement. Its official website features numerous postings advocating gay rights, homosexual adoption, and same-sex marriage. Furthermore, the group ardently opposes all efforts to change sexual orientation through therapy and intervention.[8]

Dr. Mohler went on to describe the APA’s attack on reparative therapy as a “totalitarian vengeance”:

The APA’s policy statement, “Appropriate Therapeutic Responses to Sexual Orientation,” includes a prohibition against therapies that seek to change sexual orientation. Another document published by the group condemns “reparative therapy” and “transformational ministry” intended to lead persons out of the homosexual lifestyle and into heterosexuality. The guidelines published in that document were also endorsed by the American Academy of Pediatrics, the American Association of School Administrators, the National Association of School Psychologists, the National Association of Social Workers, and the National Education Association.

This represents a near total sweep for homosexual activists—and all at the expense of credible science and medicine. The fact that the National Education Association and the American Academy of Pediatrics affirmed the statement should send chills down the spine of every parent.

The groups are holding to these new-found convictions with a totalitarian vengeance. 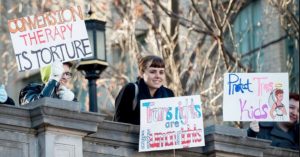 Eleven years later and in the face of the criminalization of orientation therapy sweeping across the United States, Dr. Mohler switched sides, announcing he has lately come to believe in sexual orientation and now condemns orientation counseling.

This is the next front in the homosexualists’ war against God, and as they accrue victories of this kind, fewer young men and women tempted by effeminacy and sodomy will have any place to turn for help.

The issue is simple. The world has determined that seeking change can only go one direction. If you want to convert from a man to a woman, straight to queer, holy to sinful, that’s just fine and they will offer you all the help you want. On the other hand, if you want to repent of your sin, stop being transgender, stop being queer; if you want to submit to God’s will for you by becoming more the man or woman He made you to be, they will do their best to prevent you from being helped by anybody.

But when the weak and helpless are oppressed, doesn’t the compassion of Jesus Christ drive us to stand with them and give them every bit of love and help we can? Doesn’t the authority of the Lord of all the earth compel us to obey God rather than man?

Excerpted from The Grace of Shame: 7 Ways the Church Has Failed To Love Homosexuals.

This is the first half of chapter 8 titled “Error 5: The “Reparative Therapy” Error.” The second half has now been posted, also.