John Calvin: lifting hands in worship helps “jolt us out of our laziness” 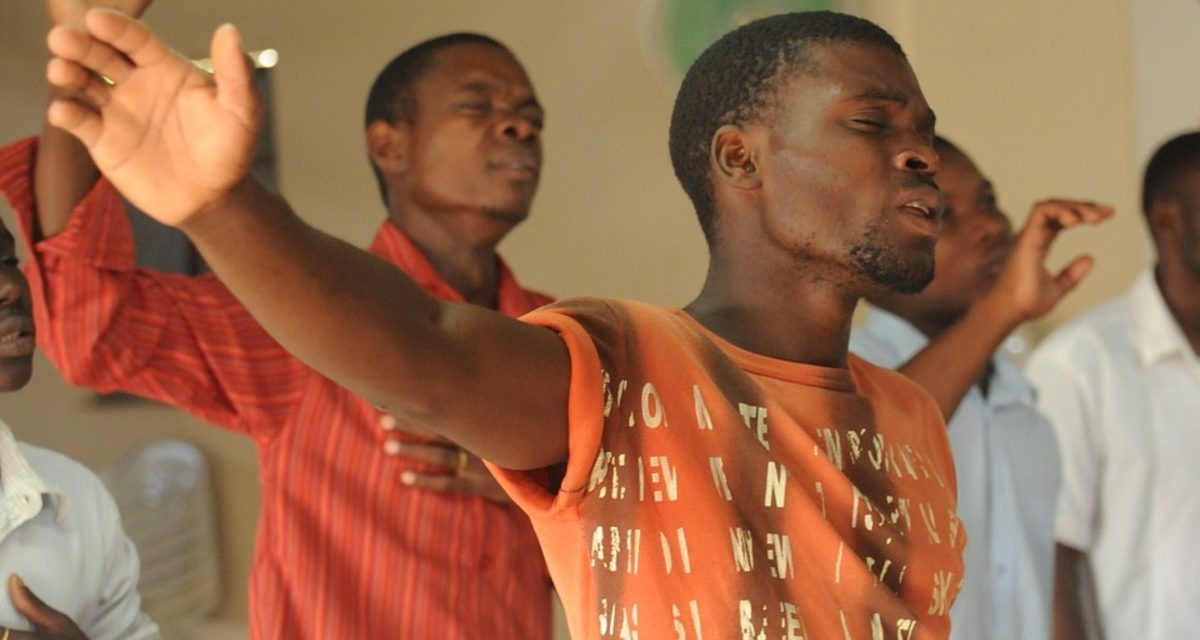 One man commented under a post that he considered the discipline of lifting hands and kneeling in prayer to be unworthy of reformed worship. Likely these things are a sort of pietistic emotional manipulation? To which I respond. First, this hypothetical exchange:

Tim Doe: “So lifting hands is wrong? Why? Who said so?”

John Doe: “Well, anyone can see it’s Pentecostals and charismatics who do that sort of thing! Who wants to be mistaken for a Pentecostal?”

Tim Doe: “So we don’t do it because we don’t want to have anyone think we’re Pentecostals. Is that it?”

John Doe: “Well, no. That’s not the only reason. There are lots of reasons, but I can’t spend all day telling you something you should already know. I don’t want to argue with you, but no self-respecting, cerebral Presbyterian would ever lift his hands in prayer.”

Tim Doe: “But I wasn’t arguing. I was only trying to find out where it says in the Bible—or for that matter, where Calvin or other reformers say it’s wrong to lift our hands in prayer or kneel in worship.”

Reformed men need to realize the reason charismatics lift their hands and kneel in worship while modern presbyterians don’t is that somehow, somewhere, we lost our way so that, now, we think we’re honoring Scripture and our spiritual fathers when we’re directly contradicting them.

Tim Doe: Here’s why we ask our worship leaders to urge the brethren, by the mercies of God, to present their bodies a living and holy sacrifice, acceptable to God, as our spiritual service of worship.

John Doe: “Bodies? Who said ‘bodies?’ The Bible teaches us to worship God ‘in spirit and in truth.’ What do bodies have to do with it?”

With that preface, here is Calvin:

The inward attitude certainly holds first place in prayer, but outward signs, kneeling, uncovering the head, lifting up the hands, have a twofold use. The first is that we may employ all our members for the glory and worship of God; secondly, that we are, so to speak, jolted out of our laziness by this help. There is also a third use in solemn and public prayer, because in this way the sons of God profess their piety, and they inflame each other with reverence of God. But just as the lifting up of the hands is a symbol of confidence and longing, so in order to show our humility, we fall down on our knees. (John Calvin, Commentary on Acts 20:36)

Lifting up pure hands As if he had said, “Provided that it be accompanied by a good conscience, there will be nothing to prevent all the nations from calling upon God everywhere. But he has employed the sign instead of the reality, for “pure hands” are the expressions of a pure heart; just as, on the contrary, Isaiah rebukes the Jews for lifting up “bloody hands,” when he attacks their cruelty. (Isaiah 1:15.) Besides, this attitude has been generally used in worship during all ages; for it is a feeling which nature has implanted in us, when we ask God, to look upwards, and has always been so strong, that even idolaters themselves, although in other respects they make a god of images of wood and stone, still retained the custom of lifting up their hands to heaven. Let us therefore learn that the attitude is in accordance with true godliness, provided that it be attended by the corresponding truth which is represented by it, namely, that, having been informed that we ought to seek God in heaven, first, we should form no conception of Him that is earthly or carnal; and, secondly, that we should lay aside carnal affections, so that nothing may prevent our hearts from rising above the world. (John Calvin, Commentary on 1Timothy 2:8)

As for bodily gestures customarily observed in praying, such as kneeling and uncovering the head, they are exercises whereby we try to rise to a greater reverence for God. (John Calvin, Institutes, III.20.33)

Let us take, for example, kneeling when solemn prayers are being said. The question is whether it is a human tradition, which any man may lawfully repudiate or neglect. I say that it is human, as it is also divine. It is of God in so far as it is a part of that decorum whose care and observance the apostle has commended to us. But it is of men in so far as it specifically designates what had in general been suggested rather than explicitly stated. (John Calvin, Institutes, IV.10.30)

…nothing prohibits a man who cannot bend his knees because of disease from standing to pray. (John Calvin, Institutes, IV.10.31)

After posting the above, a brother wrote:

It sounds like you all are saying that those who raise their hands in worship are somehow more spiritual than those who don’t. At the very least the people who raise their hands are portrayed here as somehow more mature than the counterparts who don’t. Can you not be a Pharisee if you worship with your hands raised or sitting quietly in the pew? It is the prayer of a righteous man that avails much, not necessarily the prayer of the man with upraised hands, if you get my drift.

What I’m saying is not that those who raise their hands, kneel, and stand in corporate worship are more spiritual, but that raising of hands, kneeling, and standing is obedient to Scripture, taught and practiced by the Reformers, gives glory to God, and is a needed discipline for our souls. Note that word “discipline.”

I suppose such statements could be construed as making the case that those who have repented of being disembodied brains in worship are more spiritual. But if so, teaching and calling others to practice almost anything in worship—or really, in any part of life—could equally be construed as spiritual pride.

As to whether or not those who follow Scripture and the Reformers by bringing bodily disciplines back into worship think themselves more mature because of it, I can’t see how that could be the conclusion of any man of good will having read this discussion.

Speaking for myself, every time—and I mean, every single time—I lift my hands in worship, I feel quite immature and childish. Then I remember this is a discipline, and I am glad my hands are lifted. I remember our Lord warned us if we are to enter the Kingdom of Heaven, our faith must be childlike.

As to Phariseeism, it never dies and no one holds a corner on it.

Meanwhile, keep in mind that the improper use of a tool does not invalidate its proper use. The question isn’t whether preaching or prayer or standing or kneeling or lifting hands can be abused in worship, but whether these are proper disciplines during worship.

The reformers said so. We believe they’re right.

Should we reserve these bodily disciplines for the privacy of the home? Should we not incorporate them in worship lest we call attention to ourselves?

No. It’s time to reverse this equation. Maybe we can neglect our bodies at home, where we don’t have worship leaders. But we ought not be allowed to do so at church where the elders lead us and know our weaknesses. Hasten the day when the man who doesn’t kneel and lift his hands and stand during worship will call attention to his own rebellion and pride in the presence of the assembly of the people of God.

Pride is the besetting sin of our reformed hearts. What excellent discipline of our laziness and pride for us to stand, kneel, and lift hands in a childlike gesture to our Heavenly Father.