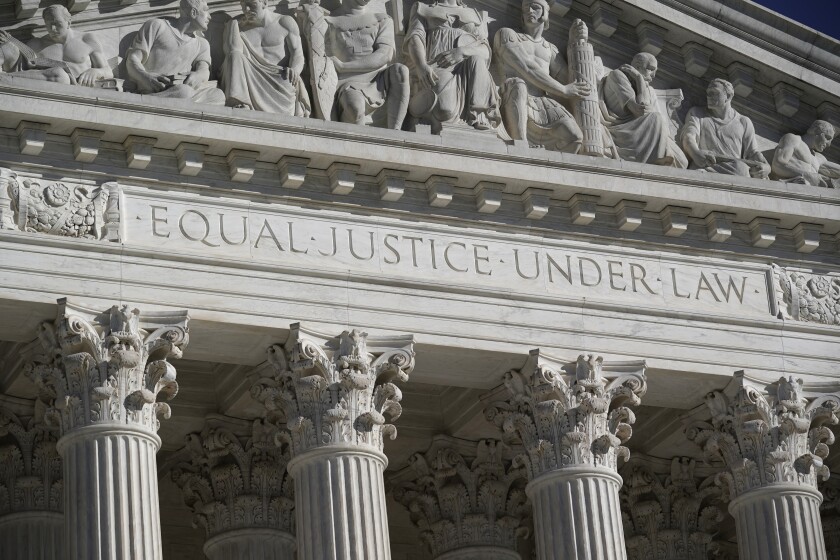 CNN has done us a favor, producing a comparison between Alito’s draft opinion leaked by Politico and the final version released yesterday. Reading through the first half, no changes have been significant—until this at D1. Here the majority demonstrates the irrationality and special pleading of the opposing members of the court in their dissent. The section is eye-opening. Do read it.

A part of this added statement is sad, though. Note the final sentence I have put in bold:

The most striking feature of the dissent is the absence of any serious discussion of the legitimacy of the States’ interest in protecting fetal life. This is evident in the analogy that the dissent draws between the abortion right and the rights recognized in Griswold (contraception), Eisenstadt (same), Lawrence (sexual conduct with member of the same sex), and Obergefell (same-sex marriage). Perhaps this is designed to stoke unfounded fear that our decision will imperil those other rights, but the dissent’s analogy is objectionable for a more important reason

Otherwise, this addition is quite significant and helpful:

The dissent is very candid that it cannot show that a constitutional right to abortion has any foundation, let alone a “‘deeply rooted’” one, “‘in this Nation’s history and tradition.’” Glucksberg, 521 U. S., at 721; see post, at 12–14 (joint opinion of BREYER, SOTOMAYOR, and KAGAN, JJ.). The dissent does not identify any pre-Roe authority that supports such a right—no state constitutional provision or statute, no federal or state judicial precedent, not even a scholarly treatise. Compare post, at 12–14, n. 2, with supra, at 15–16, and n. 23. Nor does the dissent dispute the fact that abortion was illegal at common law at least after quickening; that the 19th century saw a trend toward criminalization of pre-quickening abortions; that by 1868, a supermajority of States (at least 26 of 37) had enacted statutes criminalizing abortion at all stages of pregnancy; that by the late 1950s at least 46 States prohibited abortion “however and whenever performed” except if necessary to save “the life of the mother,” Roe, 410 U. S., at 139; and that when Roe was decided in 1973 similar statutes were still in effect in 30 States. Compare post, at 12–14, nn. 2–3, with supra, at 23–25, and nn. 33–34.47

The dissent’s failure to engage with this long tradition is devastating to its position. We have held that the “established method of substantive-due-process analysis” requires that an unenumerated right be “‘deeply rooted in this Nation’s history and tradition’” before it can be recognized as a component of the “liberty” protected in the Due Process Clause. Glucksberg, 521 U. S., at 721; cf. Timbs, 586 U. S., at ___ (slip op., at 7). But despite the dissent’s professed fidelity to stare decisis, it fails to seriously engage with that important precedent—which it cannot possibly satisfy.

The dissent attempts to obscure this failure by misrepresenting our application of Glucksberg. The dissent suggests that we have focused only on “the legal status of abortion in the 19th century,” post, at 26, but our review of this Nation’s tradition extends well past that period. As explained, for more than a century after 1868—including “another half-century” after women gained the constitutional right to vote in 1920, see post, at 15; Amdt. 19—it was firmly established that laws prohibiting abortion like the Texas law at issue in Roe were permissible exercises of state regulatory authority. And today, another half century later, more than half of the States have asked us to overrule Roe and Casey. The dissent cannot establish that a right to abortion has ever been part of this Nation’s tradition.

Because the dissent cannot argue that the abortion right is rooted in this Nation’s history and tradition, it contends that the “constitutional tradition” is “not captured whole at a single moment,” and that its “meaning gains content from the long sweep of our history and from successive judicial precedents.” Post, at 18 (internal quotation marks omitted). This vague formulation imposes no clear restraints on what Justice White called the “exercise of raw judicial power,” Roe, 410 U. S., at 222 (dissenting opinion), and while the dissent claims that its standard “does not mean anything goes,” post, at 17, any real restraints are hard to discern.

The largely limitless reach of the dissenters’ standard is illustrated by the way they apply it here. First, if the “long sweep of history” imposes any restraint on the recognition of unenumerated rights, then Roe was surely wrong, since abortion was never allowed (except to save the life of the mother) in a majority of States for over 100 years before that decision was handed down. Second, it is impossible to defend Roe based on prior precedent because all of the precedents Roe cited, including Griswold and Eisenstadt, were critically different for a reason that we have explained: None of those cases involved the destruction of what Roe called “potential life.” See supra, at 32.

So without support in history or relevant precedent, Roe’s reasoning cannot be defended even under the dissent’s proposed test, and the dissent is forced to rely solely on the fact that a constitutional right to abortion was recognized in Roe and later decisions that accepted Roe’s interpretation. Under the doctrine of stare decisis, those precedents are entitled to careful and respectful consideration, and we engage in that analysis below. But as the Court has reiterated time and time again, adherence to precedent is not “‘an inexorable command.’” Kimble v. Marvel Entertainment, LLC, 576 U. S. 446, 455 (2015). There are occasions when past decisions should be overruled, and as we will explain, this is one of them.

The most striking feature of the dissent is the absence of any serious discussion of the legitimacy of the States’ interest in protecting fetal life. This is evident in the analogy that the dissent draws between the abortion right and the rights recognized in Griswold (contraception), Eisenstadt (same), Lawrence (sexual conduct with member of the same sex), and Obergefell (same-sex marriage). Perhaps this is designed to stoke unfounded fear that our decision will imperil those other rights, but the dissent’s analogy is objectionable for a more important reason: what it reveals about the dissent’s views on the protection of what Roe called “potential life.” The exercise of the rights at issue in Griswold, Eisenstadt, Lawrence, and Obergefell does not destroy a “potential life,” but an abortion has that effect. So if the rights at issue in those cases are fundamentally the same as the right recognized in Roe and Casey, the implication is clear: The Constitution does not permit the States to regard the destruction of a “potential life” as a matter of any significance.

That view is evident throughout the dissent. The dissent has much to say about the effects of pregnancy on women, the burdens of motherhood, and the difficulties faced by poor women. These are important concerns. However, the dissent evinces no similar regard for a State’s interest in protecting prenatal life. The dissent repeatedly praises the “balance,” post, at 2, 6, 8, 10, 12, that the viability line strikes between a woman’s liberty interest and the State’s interest in prenatal life. But for reasons we discuss later, see infra, at 50–54, 55–56, and given in the opinion of THE CHIEF JUSTICE, post, at 2–5 (opinion concurring in judgment), the viability line makes no sense. It was not adequately justified in Roe, and the dissent does not even try to defend it today. Nor does it identify any other point in a pregnancy after which a State is permitted to prohibit the destruction of a fetus.

Our opinion is not based on any view about if and when prenatal life is entitled to any of the rights enjoyed after birth. The dissent, by contrast, would impose on the people a particular theory about when the rights of personhood begin. According to the dissent, the Constitution requires the States to regard a fetus as lacking even the most basic human right—to live—at least until an arbitrary point in a pregnancy has passed. Nothing in the Constitution or in our Nation’s legal traditions authorizes the Court to adopt that “‘theory of life.’” Post, at 8.