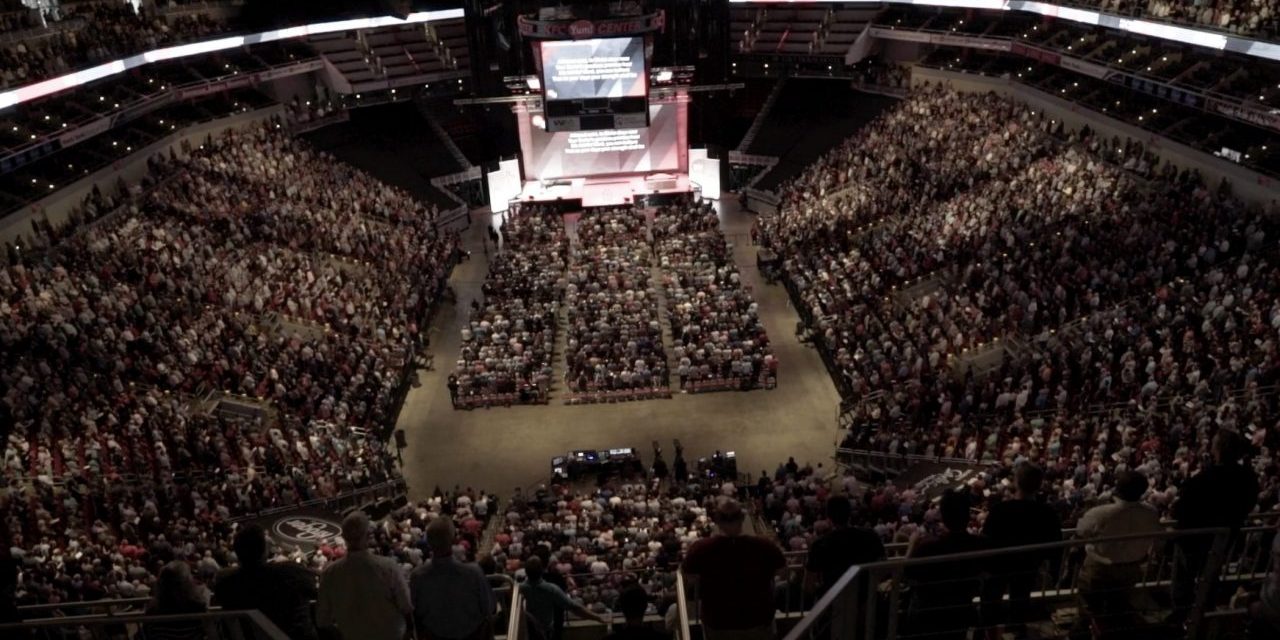 Some may have heard Together for the Gospel is splitting up. Their press release didn’t mention any possibility of a reunion, but I’d be surprised if Crossway doesn’t make it happen in a couple years. Twelve thousand together at the stadium buying books is something else.

The press release made no mention of their split having anything to do with relational issues, but if you’ve ever known guys in a band and gone to their practices, you get it that bands are always about to split over relational issues. Egos puffed by the adulation of fans usually grow so big it takes the mass applause in a stadium to hold them together. They can tolerate it long enough to put on the show, but they’re not hanging out with each other at the bar later that night. When the gig’s over, they split—until the next show.

After a while, though, the applause (which is shared) isn’t enough. Even if the gif is only once a year. Even if it’s just a couple hours a year and the venue is less than an hour from your house.

Their release said they split because their lead has more pressing things on his mind. He left saying he loves them all, but he’s got a new solo act over at a Christian magazine.

You wonder why they didn’t just audition for his replacement. Even if the new guy wasn’t as good and ticket sales dropped, it would remain quite profitable, particularly if ancillary book sales were taken into account.

Well now, we have that settled and I’m happy to stand corrected.

But surely readers remember the warning I’ve been giving for decades, passed on from my dad. The last five or so years of his life, he kept warning, “Tim, every man is out to build his kingdom. Every one of them, including Jim Dobson.” He added that second sentence because he knew of my respect for Dobson’s costly stand against pornography and abortion, as well as the fact that Christianity Today disdained him.

Dad spoke alongside these guys for years. He knew them too well, and he was right.

Ten years after the Lord took him, I saw it up close during the years I worked a side job with these men. It was trying, and after four years I quit. One year, working with two celebrities planning a national conference, I pulled the job of inviting the speakers. Our venue was the DFW Hyatt. Leading up to the show, I gathered photos and bios, planning with speakers their subjects and titles.

That was the end for me. Some were humble, but then there were the big boys…

My brother David provided the only memorable moment. He and I flew to Dallas and checked into our rooms before going down to the grand ballroom for the initial plenary session. Walking through the side door, across the room to our left was the stage and podium with the audience on the right. Far enough back, our view of the whole was good, and there on the platform speaking behind the podium was a small man.

It wasn’t how far away he was that made him appear small. He is short, and it was accentuated by how small he looked behind the podium in front of him.

It wasn’t memorable because he was speaking, or short.

What grabbed our attention was his image filling the two monstrous video screens hanging from the ceiling just over and slightly behind his right and left shoulders.

His images hanging over him made him look tiny by comparison. It was embarrassing. I felt sorry for him, seeing how awfully accentuated his shortness was by his video hugeness. I realized if I were over in the audience, I wouldn’t bother looking at him. He himself would be underwhelming, even if he was closer to me than his screen presence. I knew I’d reassure myself of the importance of the occasion and his message by watching him larger than life up there on the video screens.

This was shocking, but the memorable thing was my brother David’s gasp and exclamation: “Tim, it’s idolatry. I’m telling you, it’s idolatry!” He almost shouted, and if you know David, you believe me.

And he was precisely right. It was image-worship, and in the intervening quarter-century this worship of our precious idols has only gotten worse. Reformed stars and their fans may be the worst of all.

Leading up to the conference, it seemed to me these men thought of themselves as rock stars. One of them was so irritated at my requesting his bio and pic for the marketing. Speakers have such concern over their books being available for sale, and the books better get good placement in the book exhibits.

So here’s one pastor who is rejoicing over Together for the Gospel throwing in the towel. It will be so good for the flock. No more displacement and humiliation of smelly shepherds who spend their lives caring for God’s sheep, one by one; sheep who are content for humble shepherds who simply work at knowing them each by name, watching over them with jealousy, and caring for them tenderly with an eagle-eye for God’s approval—not man’s.

Here is part of my Bible reading this morning: