NCAA womyn’s basketball has me thinking 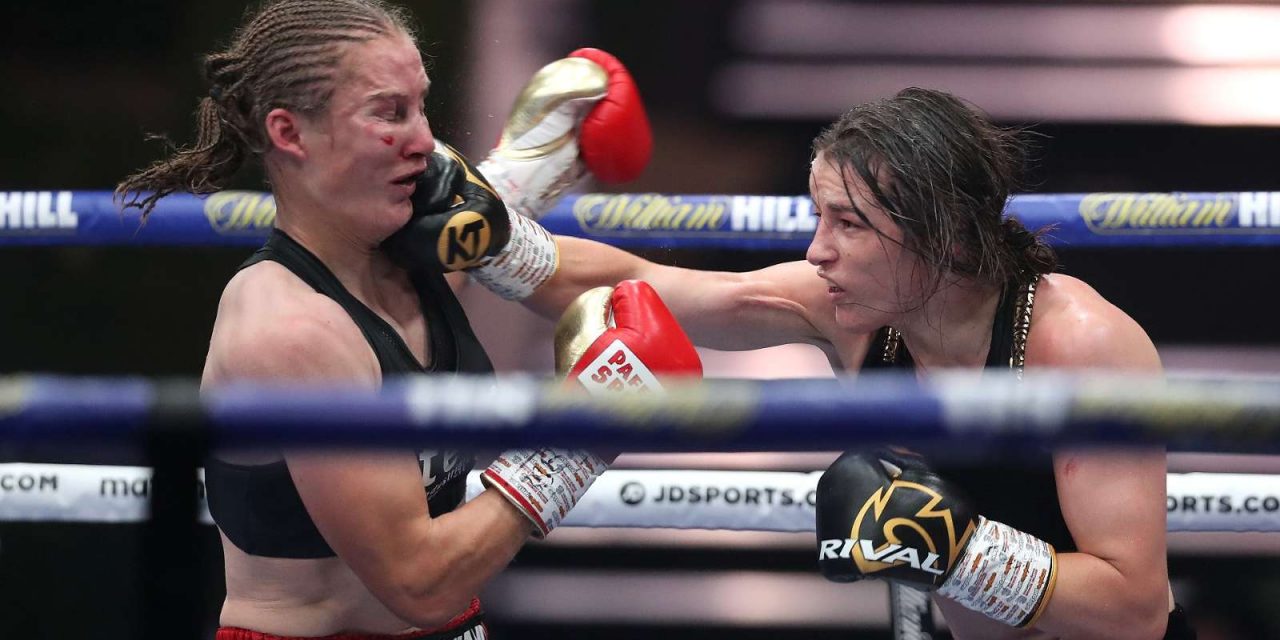 I’ve decided to have another go at women’s sports. Not satisfied with what I said last night, so here goes.

First, look at the pic above. Look at it and see if your response is normal, which would be “yuck.” You know, like eight-year-old boys or girls watching a movie where a man and woman start kissing? They can’t keep themselves from saying “yuck” and looking away. It’s worth asking why about that one too, but let’s stick to the theme of women’s sports.

Normal adults dislike the pic above. Why?

All sports are not ritualized battle, but boxing is. In fact, one could make the case boxing isn’t ritualized at all; it’s just pure battle, and for that reason women should not do it and no one should participate in it as entertainment.

Because it’s a violation of the Seventh Commandment.

The beginning of obedience of God’s Moral Law pertaining to sex revealed in the Seventh Commandment is modesty. The Seventh Commandment does not just prohibit spouses from having intercourse with someone other than their husband or wife, but also clothing and looks and entertainments and drinking which leads there.

So what about women boxing?

A woman shall not wear man’s clothing, nor shall a man put on a woman’s clothing; for whoever does these things is an abomination to the LORD your God. (Deuteronomy 22:5)

Why not? Calvin writes:

This decree also commends modesty in general, and in it God anticipates the danger, lest women should harden themselves into forgetfulness of modesty, or men should degenerate into effeminacy unworthy of their nature. Garments are not in themselves of so much importance; but as it is disgraceful for men to become effeminate, and also for women to affect manliness in their dress and gestures, propriety and modesty are prescribed, not only for decency’s sake, but lest one kind of liberty should at length lead to something worse. The words of the heathen poet are very true:

Well, every Christian can agree that women’s gymnastics is immodesty, right? Also women’s beach volleyball (yikes!). And what about figure skating? Cheerleading? Ballet?

“But ballet’s not a sport; it’s an art form,” you respond.

Okay, it’s an art form, but is it immodest?

But hey, I did say our theme is women’s sports, so let’s back out of the ballet thing and return to the pic above. Can anyone at all argue with the declaration that what is depicted there is almost the very definition of immodesty? Anyone who is a Christian, that is?

Now many worldlings would respond to these statements by accusing me of being a pervert. “What sort of man thinks ‘sex’ when he watches women box?” they’d declare.

This sort of man, I respond. And really, every sort of man who has not yet seared his conscience to the beauty and truth at the heart of God’s creation of woman for man.

We start with the wrongness of the clothing and skin, but we don’t stop there. What about the action, itself? Women punching and kicking each other; and for argument’s sake, let’s think about it going on in private—not in front of thousands watching it for entertainment.

Should women—any women at all—ever give themselves over to punching and kicking each other?

“Well, it depends on whether or not it’s in anger,” you respond?

That’s convenient. So what is depicted in the pic above is fine, since it’s not in anger, right? Women getting martial arts training and competing in that training is no violation of the Seventh Commandment since they aren’t really angry. It’s just a physical discipline that is valuable to teach daughters so they can defend themselves if anyone tries to take advantage of them, right?

Uh-huh. And thus every sexual command and doctrine of Scripture gets turned upside down by modern man who is masterful at doing what his perverse nature wants and justifying it with verbiage that is carefully decadent.

Too bad the Apostle Paul didn’t realize these things. Too bad the Westminster divines didn’t have such an enlightened understanding as they went all rigid on the Seventh Commandment, writing stuff like it prohibited “all unclean imaginations, thoughts, purposes, and affections; all corrupt or filthy communications, or listening thereunto; wanton looks, impudent or light behavior, immodest apparel; unchaste company; lascivious songs, books, pictures, dancings, stage plays; and all other provocations to, or acts of uncleanness, either in ourselves or others.”

While there is a certain type of man today who has acclimated himself to women’s basketball and soccer, seeing nothing immodest about them, most men object to watching the stuff simply because it’s so much less interesting than watching men doing it. The jumps aren’t as high, the running isn’t as fast, the kicks aren’t as strong, the speed isn’t as great, and so on. Which is only to state the obvious already stated so very simply and directly in the Word of God: woman is “a weaker vessel” (1Peter 3:7).

But it’s actually sub-Biblical to decline women’s basketball and soccer because woman is the weaker vessel when there are reasons to do so that are not just a matter of entertainment value, but of sin. Run through that list of violations of the Seventh Commandment above, again. What is “light behavior?” What are “wanton looks?” What does sexual “impudence” look like?

Think about the role of aggressiveness in soccer. Can anyone argue a good coach will not teach his keeper and defenders and midfielders and strikers to be aggressive? Of course not. I’ve spent countless hours at the side of my son’s soccer practices and games and spent many of those hours silently mourning the passivity of their coach’s coaching.

But did I feel the same when my daughters were out there on the soccer field?

Nope. Coaching sons and coaching daughters is coaching two different sexes and the goal of nothing in life should be to remove those distinctions, least of all on the soccer field. To teach my daughters to play hard to win is one thing, but to teach them to be aggressive would have been a provocation to the violation of the Seventh Commandment. It would have been to inculcate in them an immodesty and impudence which was contrary to their very nature as woman.

So does this mean women shouldn’t play soccer?

Well, there’s soccer, and then there’s soccer. For years our church played soccer together each week, with boys, girls, young men, young women, and even little children out on the field together, but it was a different thing entirely than women’s travelling soccer clubs and women’s collegiate soccer; and it was a whole different world than the US Women’s National Team.

Intramural and recreational games played by women, or women and men together, are not what I am talking about, here; although those things present many occasions for sexual sins which must be guarded against.

But back to the Seventh Commandment. It is entirely possible for the same game to be played both modestly and immodestly, and although part of it is clothing, clothing is just the beginning of considerations related to the matter.

We could go on at book-length merely on the subject of the Seventh Commandment and women’s sports, but it’s time to close. A few things left to be said, though.

First, I spent much time in my youth playing tennis and often did so with my older sister (six years older). She was good and almost always beat me, and I never saw this as any violation of the Seventh Commandment then, nor do I now. It wasn’t immodest. Deborah won because she was better than her opponent and that was good and right. It was not in the least bit twisted, sexually. There’s nothing wrong with women beating men at games whether those games are Scrabble, tennis, or soccer. This is not about men needing to win.

It’s about men and women both needing to be careful to protect sexuality’s first things, and what could be more first things, sexually, than teaching, affirming, and living feminine life-givingness. The Bible prescribes the essence of femininity for us when it records that the first woman made for the first man was called “Eve” because God had made her life-giver. Can we please return to affirming, teaching, and living this essence of womanhood across all of life?

This is not in the slightest demeaning to any woman.

If you desire to repent of this present sexual anarchy you live in, and grow in your understanding of the sinfulness of women’s sports today, discipline  yourself always to begin your considerations of sexual distinctions across life by remembering who woman was made for, and why, and how? Then ask yourself, in light of Scripture, what sort of character traits we should work to inculcate in our daughters toward each of them confessing and living their womanhood as Scripture reveals it in all its glory.

Christian man, precisely what do you want your daughter to be and look like, and how do you want her to act and speak to the end that she glorifies God as woman—not person?

Finally, keep in mind that lesbianism permeates a number of women’s sports teams and fans—particularly women’s basketball and soccer. Then allow yourself to think about that in light of all that Scripture reveals to us concerning woman and man.