The Virgin Mary: Blessed is the fruit of thy womb 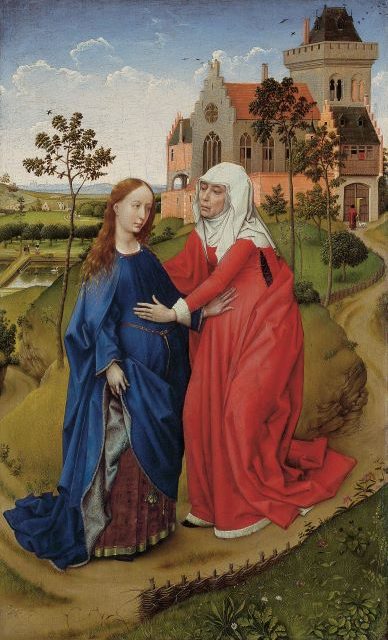 Yesterday, our text was Mary’s journey to the hill country of Judea to visit her relative, Elizabeth. Luke records her arrival:

When Elizabeth heard Mary’s greeting, the baby leaped in her womb; and Elizabeth was filled with the Holy Spirit. And she cried out with a loud voice and said, “Blessed are you among women, and blessed is the fruit of your womb! And how has it happened to me, that the mother of my Lord would come to me? For behold, when the sound of your greeting reached my ears, the baby leaped in my womb for joy. And blessed is she who believed that there would be a fulfillment of what had been spoken to her by the Lord.”

Is there any part of Holy Scripture that presents infancy, womanhood, femininity, and motherhood more beautifully? Such tenderness toward mothers and children is characteristic of the history written by Luke, who was a physician.

Earlier in this chapter, Luke records Mary responded to the angel’s announcement of her pregnancy by asking how this could be since she was a virgin? The wide-eyed wonder and vulnerability of a young teenage girl betrothed to a man. She has just been told by an angel of the Lord that she is pregnant, but she can’t conceive how her purity allowed such a thing.

The angel responded by telling her it was no man, but the Spirit of God who would deposit this fruit in her womb. Her purity wouldn’t be violated or lost; she would continue to be holy unto the Lord.

But of course, although personally reassuring, Mary instinctively knew how women and men would view her as her belly swelled, so all was not quite well. Mary needed faith.

With understanding and compassion, the angel of the Lord lowered himself to her weakness. Immediately after his reassurance that the fruit of her womb would be by the power of the Holy Spirit, he went on to open up to her another secret which was also miraculous. Her childless relative, Elizabeth—the angel referred to Elizabeth as “she who is called barren”—was also pregnant! In her old age! Both women miraculously pregnant! The angel then stated what had become increasingly obvious as the secret things of God were revealed that day: “For nothing will be impossible with God,” he said.

Blessed Mary did what any young teenage girl would have done in those circumstances: she picked up and hightailed it out to the hill country of Judea to share the joy of the fruit of her womb with the joy of Elizabeth whose unborn child was six months old, now—quite visible nestled there in the safety of his mother’s womb.

As we said before, what tender pictures our Heavenly Father has given us of womanhood, femininity, motherhood, and babies. Do we rejoice with these mothers God has blessed so wondrously? Do we remember how God acts most powerfully in behalf of the barren by blessing them with the fruit of the womb. So we recognize those mothers joy? Do we join them in it?

Think of God’s gift to Sarah of her miraculous child of promise, Isaac. Of His miraculous gift to barren Hannah of her son, Samuel. Of His miraculous preservation of the life of Moses. His opening the womb of Manoah’s barren wife, giving her a son. See how He blessed the barren Shunamite woman with a son. See His compassion for Elizabeth, presenting her with John. See His care for the Virgin Mary, placing her Lord in her womb for nine months.

Lo, He abhors not the Virgin’s womb.

So it was that Blessed Mary was greeted by her relative, Elizabeth, who cried out—Scripture records it was “in a loud voice”:

Blessed are you among women, and blessed is the fruit of your womb!

If you are a father, love your wife. She is the mother of your sons and daughters; the woman who has presented you with the fruit of her womb. Love your Heavenly Father Who has blessed you with a wife who is not out to make a name and career for herself, but to give her life to bearing fruit from God. To His glory.