Oh Absalom, my son, my son! 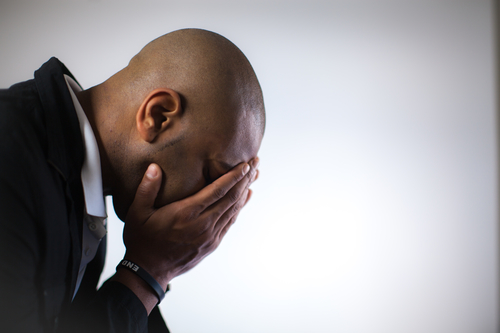 So the people went by stealth into the city that day, as people who are humiliated steal away when they flee in battle. The king covered his face and cried out with a loud voice, “O my son Absalom, O Absalom, my son, my son!” -2Samuel 19:3-4

Absalom was David’s son and David’s enemy. Absalom sat in the city gate flattering and stealing the hearts of the people from King David. Absalom called the men of Israel to join him in a rebellion against his father. Absalom captured Jerusalem, forcing his father to flee. Absalom then bedded his father’s ten concubines. Absalom then sought the best way to kill his father, dead.

Eventually, those loyal to King David rose up and fought Absalom, putting down his rebellion against his father by killing him, dead. And how did his father respond?

He mounted a great pity party for his poor son. He cried and cried for him, repeatedly calling out “Oh Absalom, my son, my son!” He did it loudly.

Let’s stop for a minute and think about fathers’ love. It’s true fathers can have great tenderness for their daughters. It’s not accidental the Prophet Nathan likened the poor man’s “one little ewe lamb [who would] lie in his bosom,” saying she “was like a daughter to him” (2Samuel 12:1-4).  Those of us who are older sometimes look at a young daughter with her father and shake our heads, warning the father, “She’s going to have you wrapped around her little finger.” A few years later, she does. She knows and uses it.

Sometimes fathers have great tenderness towards a son, also, but that tenderness tends to be more selective. It’s not for all their sons, but one particular one. The rest of the children see it. His wife knows it and picks the son left behind as her favorite, taking up his case against his father as Rebekah took up Jacob’s case against Isaac.

Over the years, I’ve watched fathers’ great tenderness toward their favorite son ruin that son, as well as their household. If Joseph was impertinent telling his dream to his brothers, his father Jacob didn’t help matters by dressing him in his coat of many colors. No wonder the brothers were going to murder him!

This case of David’s tenderness toward Absalom, though, lowers things to a level of cloying sentimentality between father and favorite son that is a necessary and helpful warning to us in our fatherly tenderness. It’s hard to believe how degraded King David became in his public mourning for his wicked son.

We note Scripture says the mourning of David humiliated his people, leaving them slinking around the city in shame. Is this not what happens in every household when the father mourns separation from his favorite son whose wickedness has alienated him from the household, even to death itself? Those who honor their father are demoralized. Why bother? His sons and daughters have long been alienated from their brother. Privately, they have rebuked and shamed him. His mother has rebuked and shamed him—but again, privately, for fear of her husband being angered with her for touching the apple of his eye.

But yes, the son was wicked and his wickedness was dividing the family between those loyal to him and those loyal to his father. It’s just that the father seemed to prefer they be loyal to their wicked brother than to him, if you can believe it? So confusing to them.

Meeting no resistance from the head of the home, in time this spoiled favorite son pushes his wickedness to such a level that his father’s house divided becomes obvious and intolerable, so he must leave. Will he take some of his brothers and sisters with him? Will his mutiny destroy himself alone, or also the marriage and family?

With King David, even though his son Absalom is now dead, would he continue to destroy his father’s kingdom and household? Would the rot of his father’s sentimentality and public mourning continue to destroy his household and kingdom? King David’s relentless, loud mourning was humiliating them. They were ashamed. They were demoralized. Where would it end?

“Now therefore arise, go out and speak kindly to your servants, for I swear by the LORD, if you do not go out, surely not a man will pass the night with you, and this will be worse for you than all the evil that has come upon you from your youth until now” (2Samuel 19:5-7).

It couldn’t have been put more perfectly, could it? King David was loving those who hated him and hating those who loved him.

This is the truth of the matter when a father chooses his favorite, but faithless, son over his faithful subjects. He is precious about his son who hates and seeks to kill him while despising his family members who love him. The real shame isn’t theirs, but his.

Working as pastors and elders, how often we see this. It is so unseemly, but none of us are over the father’s army and in a position to give him the choice, “Stop this or die!”

What should we learn from this historical record in Scripture?

Fathers are not supreme, even if they are the king of Israel. Only God is supreme, and those who rebel against him are not to be treated preciously by their fathers because doing so denies and defies the Living God. Even, and especially, if they die in their sins.

Do you remember what Jesus said?

He was in a house filled with people—so many that his brothers and mother couldn’t get in to see him. So they sent a message to Him, inside:

But Jesus answered the one who was telling Him and said, “Who is My mother and who are My brothers?” And stretching out His hand toward His disciples, He said, “Behold My mother and My brothers! For whoever does the will of My Father who is in heaven, he is My brother and sister and mother” (Matthew 12:46-56-50).

The boundaries of our family, loyalty, and love are determined by faithfulness to God—not strings tuned to the key of our tender hearts. We must love our Heavenly Father and hate those who hate Him, even (and especially) though the man who hates God be our favorite son.

God is our Father. Those who love God are our mother, brother, and son. Those who hate God are nothing to us.

Nothing, unless and until they repent—as did the Prodigal Son.