Men and women: the state of our disunion (V) 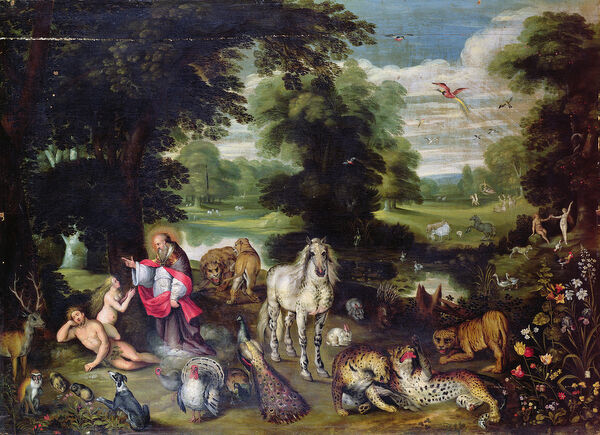 Take a minute and read this section of Milton’s Paradise Lost:

Two of far nobler shape, erect and tall,
Godlike erect, with native honor clad
In naked majesty, seemed lords of all:
And worthy seemed; for in their looks divine
The image of their glorious Maker shone,
Truth, wisdom, sanctitude severe and pure,
(Severe, but in true filial freedom placed,)
Whence true authority in men; though both
Not equal, as their sex not equal, seemed;
For contemplation he and valor formed;
For softness she and sweet attractive grace;
He for God only, she for God in him:
His fair large front and eye sublime declared
Absolute rule; and hyacinthine locks
Round from his parted forelock manly hung
Clustering, but not beneath his shoulders broad;
She, as a veil, down to the slender waist
Her unadornèd golden tresses wore
Dishevelled, but in wanton ringlets waved
As the vine curls her tendrils; which implied
Subjection, but required with gentle sway,
And by her yielded, by him best received,
Yielded with coy submission, modest pride,
And sweet, reluctant, amorous delay.

When Adam sinned, what paradise we lost. Out of His kindness, God saved some parts of His perfect creation from utter degradation as a result of the Fall. Take male and female, for instance: He kept man, woman, and marriage relatively intact for us. He didn’t need to. He owed us nothing but instance death and Hell, but from His grace these precious gifts remained. Yes, sullied, but largely intact. Being evil, though, rather than thank Him for this beauty and love protected for us, we have determined to muck them up until they are as filthy as our own wicked hearts.

From the moment of our conception, God showers us with grace by assigning each of us one of two identities. From the beginning He creates each man either male or female. We are, all of us, either man or woman.

All of personhood and existence necessarily flow from this commission each of us has received from his Creator.

The effects of the Fall are not absent, though. Outside or inside marriage, peace between male and female has never been easy. Exploiting this conflict between the sexes, the Pharisees tested Jesus here:

Some Pharisees came to Jesus, testing Him and asking, “Is it lawful for a man to divorce his wife for any reason at all?”

Where did Jesus turn for His answer?

And He answered and said, “Have you not read that He who created them from the beginning made them male and female, and said, ‘For this reason a man shall leave his father and mother and be joined to his wife, and the two shall become one flesh’? So they are no longer two, but one flesh. What therefore God has joined together, let no man separate.” (Matthew 19:3-6)

Jesus lived His life by the words of God. He answered Satan’s temptations and the seminary professors and presbyters trying to trap Him simply by quoting Scripture: “Have you not read?”

All Scripture is God-breathed and profitable to us. Every last word in God’s book is the voice of God to us. Sometimes, though, we get caught up in arguments about this or that law or command having or not having application to the New Covenant, here and now today.

Should Christians be circumcised?

This is the question dealt with across the New Testament, particularly Acts 15 and Galatians. If baptism has now replaced circumcision as the initiation rite of the New Testament church, should fathers baptize the infants born into their homes or has the nature of the New Covenant displaced household covenantal initiation, calling instead for baptism only to be administered to those making adult confessions of personal faith?

There are many divisions in the Church over where and when this or that Scriptural ordinance and command apply, but there cannot be the slightest confusion among us concerning the laws God put in place in the Garden of Eden prior to the Fall. Those laws have always been recognized as eternally binding, and not only for the people of God, but for all men.

“From the beginning,” said our Lord teaching us that God’s Creation Ordinances are never inapplicable anywhere with anyone. What has been set in place “in the beginning” by our Creator is infallible and perpetually applicable among all Adam’s descendants.

Now then, note our Lord’s answer above. These Creation Ordinances include the dichotomous nature of every man’s existence because “from the beginning” our Creator made all and each of us either male or female. It matters not a bit whether this or that male likes being male or wishes he were female, nor does it matter a bit whether this or that female likes being female or wishes she were male.

What God hath joined together, let no man divide.

From the moment of conception, God has joined every man to one of two callings. He has made each soul either male or female. Our manhood or womanhood are His creation from our very beginning and we trash or rebel against this union of personhood with sexuality to our present and eternal peril.

What greater authority could there be for saying “no” to those promoting and living the LGBTQ perversions than that thunderclap from on high issued directly from the mouth of Jesus to our world now:

Have you not read that He who created them from the beginning made them male and female, and said, ‘For this reason a man shall leave his father and mother and be joined to his wife, and the two shall become one flesh’?

Note the disciples’ response. They said to Jesus, “If the relationship of the man with his wife is like this, it is better not to marry.” (Matthew 19:3-10)

To obey God has always been difficult. The permanence of marriage Jesus proclaimed as God’s command led the disciples to despair. “Why get married? It’s better just to avoid it than to separate these two God Himself has joined together!”

Today within the church men and women think nothing of dividing what God has joined together. Divorce is boring and every Christian claims God approves of theirs.

Beyond divorce, however, what God has joined together we also divide through the LGTBQ perversions, sodomitic marriages, and the Revoice holidays celebrating effeminacy. And this despite God making each of us either male or female from the beginning. Each of these perversions of sexual identity celebrated today are rebellion against God.

Marriage is hard. So also is male and female.

Man or woman, fear God and do the hard thing. Form your personhood, your identity, appearance, posture, mannerisms, habits, and personality traits in obedience to the sex God assigned you at the very beginning.

Never deny or minimize your sex. It’s who you are and God Himself made you.

Tags: Divorce, LGBTQ, Male and female, Revoice, The state of our disunion