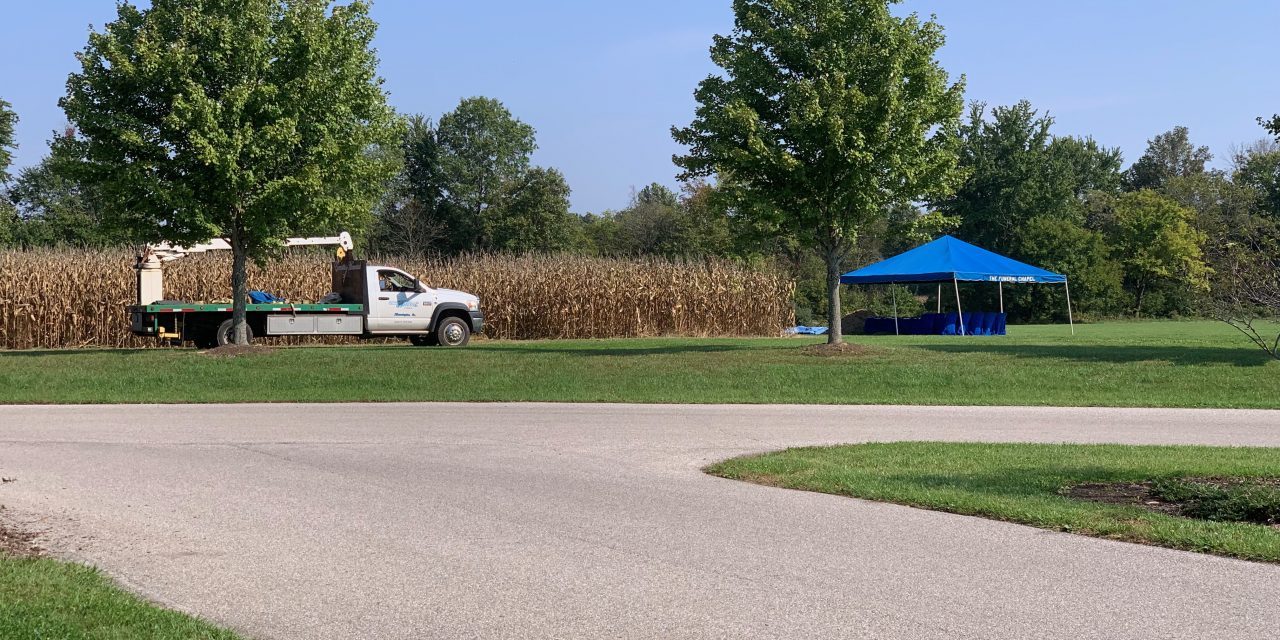 It’s redundant to say sex is foundational. What is more basic to our life than who God made us?

This is true for Christians, which is to say those who worship the true and only God. It’s no less true for pagans and idolaters. They too are made by God, and from the beginning He made each of them male and female.

The dividing line among God’s shepherds today separates men who proclaim this truth and men who hide it while assuring their sheep they know and agree with it. Follow this closely because it’s the necessary work you must do in choosing what voices to listen to and read as you do the hard work of growing in your ability to distinguish between good and evil.

Sitting at my desk on Saturday morning, I’m awaiting the funeral service and burial of Navy Captain Joe Rice. He died at home a couple of days ago, leaving behind his “Navy wife,” Eleanor. In their home as Joe lay on the entryway floor under a modesty sheet surrounded by the sheriff’s deputy and a number of men who had done their best to save Joe’s life, we began to remember Joe’s life and witness among us. There were only four of us, plus Eleanor, and two things stuck out about our faithful brother, Joe.

At first when he and Eleanor had just moved to Bloomington, Joe wasn’t whom he became. Eleanor was a Major before she was a Rice, and she’d grown up in India, a missionary’s kid. Her faith brought her to our church as soon as she and Joe arrived in Bloomington, and she has served us well as a mother in Israel. But for several years, Eleanor’s grief was Joe at home when she was with the people of God at worship.

We loved both Eleanor and Joe, and we prayed for Joe that he would turn back to God. For many years he’d been more a Navy man than a God man. A few years before Bloomington, he’d begun to turn to God, but a disappointment at a former church had turned him away from God’s house and people (and I would say especially from God’s shepherds).

This went on for some time and we all were sad. For Joe, but more for Eleanor. The absence of one’s husband in the seat next to you is something godly wives abhor and suffer with great embarrassment, as Eleanor did.

One day, we got a call from Eleanor that Joe had fallen down the stairs and was in the emergency room. Hospitals are gifts to pastors, breaking down many walls we must observe otherwise, but these walls vanish in the hour of need. Two of us pastors went down to Bloomington Hospital and were led back to the cubicle where hard, strong, proud, independent, kind, and honorable Captain Joe Rice was lying on a gurney. Walking to the head of the bed, we looked down at him and he looked straight up at us and said, “God threw me down the stairs and smashed my head on the cement, and now I’m done.”

From that point on until his death this week, Joe feared and honored God and was never ever absent from the work of worship and any other work he could do for the people of God. He went on the camping trips with the young men of our church in the Dangerous Boys Club. He was elected and ordained as a church officer, faithfully serving on our Board of Deacons. For seven years, he served as our church Treasurer. He was never loud and never weak. He gave to anyone he felt needed and deserved it, and spent the last day of his life getting to know and developing the brotherhood between himself and a new man in our church who has just completed three Marine deployments and two other terms as a private contractor in Iraq and Afghanistan. They sat out in the woods and talked. I wasn’t there, but I know part of what went down between these two men was their confessions of sin as husbands and fathers while they postured themselves as strong military men while being far, far away from their children and wives.

Joe sent Joshua home with his log splitter loaded in the back of his pickup. Joe insisted Josh take it and “get to work” on his wood for the Fall and Winter. The next morning Joe died and I’m guessing Josh is inconsolable about the immediate loss of this father God had just given him; this father he had never had. Josh needs fathers now, having repented and believed in Jesus seven months ago and setting out to be a man at home to his wife and sons rather than leaving his manhood for the Marine Corps over in Iraq and Afghanistan.

So now, back to manhood.

A few decades ago, Captain Rice resigned his Naval commission. His road to command had begun with graduation from the Naval Academy. He’d gone on to ships command in Viet Nam, then to London where he served with NATO.

As the years went by and Joe was promoted, the United States began to abuse our armed forces in service to feminist ideology. Navy ships were no exception. Captain Rice abominated the loss of discipline and honor this ushered into his Navy. His opposition to the sacrifice of preparedness on the altar of feminist social engineering eventually led Joe to resign his naval commission and retire.

Let me now repeat myself. Male and female He created them from the very beginning. Sex, therefore, is not subject to social engineering. It is absolutely foundational to the life of every man in every place across all time so that the dividing line among God’s shepherds today separates men who proclaim this truth and men who hide it while assuring their sheep they know and agree with it.

God made Adam first, then Eve. God placed His Fatherhood in man, not woman, and this archetypal Fatherhood is at the heart of the Gospel in many ways, not least of which is the incarnation of the Second Member of the Trinity as God’s Own Son. Not person or daughter. Which is to say Christ is our male Victor.

What men proclaim this truth today within the Church, let alone without the Church, to the rebellious, hard-hearted, and cruel world?

Shall we list names? Just start with yourself, dear fellow minister of God’s sacraments and words. Do you proclaim to your flock what the Apostle Paul proclaimed to his—that women are not allowed to teach or exercise authority over men because Adam was created first, then Eve?

A woman must quietly receive instruction with entire submissiveness. But I do not allow a woman to teach or exercise authority over a man, but to remain quiet. For it was Adam who was first created, and then Eve. And it was not Adam who was deceived, but the woman being deceived, fell into transgression. But women will be preserved through the bearing of children if they continue in faith and love and sanctity with self-restraint. -1Timothy 2:11-15

Before Captain Rice had repented and believed on Jesus Christ, he knew these truths and resigned his officer commission in defense of them. Meanwhile, the vast majority of commanders in the Lord’s Army, the Church Militant, hide and deny these truths both inside and outside the Church. The Church is named “the pillar and foundation of the truth” by God, yet this foundational truth in which man’s life began and ever will begin, is a source of such shame to pastors and elders that we blush and turn aside from either defending or proclaiming it.

To take just one insignificant example, a prof at Grove City College named Carl Trueman1 is currently enjoying some success in promoting himself as an astute cultural pundit, yet this same Carl Trueman has long promoted the rebellion of our world against God’s order of creation of man and woman. He has a widely-read blog on which the Tenth Presbyterian Church’s senior minister, Liam Goligher, has lied about John Calvin’s commitment to the Biblical doctrine of manhood and womanhood.

For myself, I can’t separate Joe and Carl. One was faithful and one unfaithful. Does it matter?

Is is really too much to ask servants of God to stand with Joe and against Carl? It is true that Carl enjoys the plaudits of a number of readers of this blog who love his self-promotion as an astute observer of cultural trends, but what about sexuality which is the foundation of man’s life and the center of man’s rebellion today?

Look, men: you can align yourselves with the cheap and easy path. You can act as if you don’t know that Carl is a feminist denier of God’s order of creation. You can join yourself publicly to the world’s denial of Adam being created first, then Eve.

This will win you soft men who are disciples of effeminacy, but my Dad used to say truth and time walk hand in hand.

Carl has promoted the feminist rebellion, and thus has garnered the applause of the world. Leave it to him.

There are men who were on the faculty of Westminster Seminary in Philadelphia who know full well who Carl is.

John Calvin confessed the Christian faith that the creation order of Adam and Eve was binding on all of life; not just the privacy of the Christian home and Church, but all of life. Carl provided Tenth Presbyterian Church’s Liam Goligher his own forum to lie in denial of this. Carl himself did not correct the lie. Too, Carl provided the forum of his blog for Ms. Byrd to mount her attack upon Scripture and Scripture’s God.

It’s a few hours later and we’ve now buried Captain Rice. He was a nobody in the Reformed Church. A nobody.

Who is the better man: Joe or Carl?

I say Joe, and I am pleased to condemn those men who have provided a forum for Carl to promote himself as an astute observer of Western culture. If Carl can’t bring himself to oppose the sexual rebellion of Aimee Byrd as she trashes God’s Father-authority, I say Carl is either a wimp or stupid. He’s not astute. Carl’s merely a scratcher of itching ears.

But yes, of course the world loves Carl.

For ourselves, let’s move on from all the shepherds who simply adore women rebels.