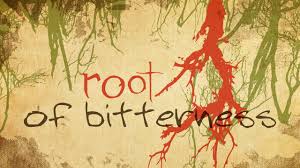 Weakness is the bitter man’s permanent abode. Putting on display his persistent state of anger and resentment over what others have done to him, he testifies to his own impotence. He was powerless in the face of the evils committed against him and now looks for opportunities to ooze the anger, resentment, and hatred that define his life.

This is not to say the bitter man recognizes his weakness. He doesn’t have that moral strength that self-knowledge and self-criticism require, so if someone points out his bondage to bitterness, he is infuriated. Life for him is stupidly simple. There are only two sorts of men—victims and perps. He’s the victim and others the perps.

Unless those others hear him tell of his misery and commiserate with him; then he grants them the status of victims, also. He lives for commiseration.

Bitterness is a voracious beast. It lusts after company. The bitter man lives for defiling many:

Pursue peace with all men, and the sanctification without which no one will see the Lord. See to it that no one comes short of the grace of God; that no root of bitterness springing up causes trouble, and by it many be defiled. (Hebrews 12:14-15)

The bitter man recounts the story of his victimhood hoping to spread his contagion. It gives him a rush for his listener to reciprocate with accounts of the origins of his own bitterness. Then, having shown each other their scars, they join together in sorting men into friends or enemies. Other victims are their friends and the rest are their enemies, their oppressors.

Being oppressed, they have no responsibility. Only oppressors are responsible for anything, anywhere, anytime.

How does one recognize the oppressor?

Ask the victim. He’ll tell you. The oppressor is any man who refuses to commiserate with him, or does so with insufficient empathy.

If some man makes even the smallest effort to qualify or temper the anger and resentments of the bitter man, he’ll be informed which side he’s on. Never mind that he was only trying to be helpful, coming alongside the bitter man and working to restore to him his equanimity, dignity, and faith in our sovereign God working all things for His Own glory. The bitter man allows for no judicious weighing of his litany of resentment.

You’re either with him or against him. There’s no middle ground.

The whiner is the sovereign of our world. His authority is unquestionable. Unimpeachable. Infallible. Irrefragable. Irresistible.

If a man questions a bitter man; if he points out he has chosen to live as a victim, he should count on watching that man’s bitterness and hatred intensify. It’s almost certain this questioner will now be added to the victim’s list of those who have done him wrong. Merely to question the victim’s narrative proves one to be an oppressor.

One might remonstrate with the victim, offering to lead him to a path of escape from his bitter bondage; one might suggest to him that embracing his own moral agency can be a first step toward freedom in Christ; but the sad truth is most every bitter man is opposed to his own moral agency. It feels uncomfortable. It’s too large and heavy for him. He prefers to have others carry that load—oppressors, that is.

In fact, he himself did not abandon his moral agency. It was no choice of his.

The evil oppressor robbed him of it.

Bitterness never gives an inch to self-knowledge or self-condemnation. It faces outward. The bitter man lives and dies a victim. Exhaling his final breath, he protests that life has been unfair and he has no doubt God will be unfair to him, also.

One day soon, you will stand before The Holy God to give an account for your life. On that day, you do not want to answer “I was a victim and lived in bitterness.”

This is what the steward with one talent said to his master:

Master, I knew you to be a hard man, reaping where you did not sow and gathering where you scattered no seed. And I was afraid, and went away and hid your talent in the ground. See, you have what is yours.

It wasn’t the victim’s fault, was it?

Of course not. It was all his Master’s fault.

Then how did the master respond?

But his master answered and said to him, ‘You wicked, lazy slave, you knew that I reap where I did not sow and gather where I scattered no seed. Then you ought to have put my money in the bank, and on my arrival I would have received my money back with interest. Therefore take away the talent from him, and give it to the one who has the ten talents. For to everyone who has, more shall be given, and he will have an abundance; but from the one who does not have, even what he does have shall be taken away.

Throw out the worthless slave into the outer darkness; in that place there will be weeping and gnashing of teeth. (Matthew 25:24-30)

The glory of God is His forgiveness of sinners, but He will not forgive you your sins if you refuse to forgive others their sins. You must seek His forgiveness. In meekness and humility. Turn to Him and plead for Him to apply the blood of His Son to you so your sins and guilt may be removed. Then plead with Him to give you freedom in Christ to stop playing the victim and blaming and hating others; freedom to forgive them as He has forgiven you.

What a burden it is to remain angry and resentful year after year, decade after decade. Give it up. Stop your narrative of victimhood. Be an adult. Look inside yourself. Pay careful attention to your own oppression of others—to your very own wickedness.

Then bring all of it to Jesus to be lifted from you, both now and eternally. He promises that those who come to Him, He will never cast out.