Authority in the Garden 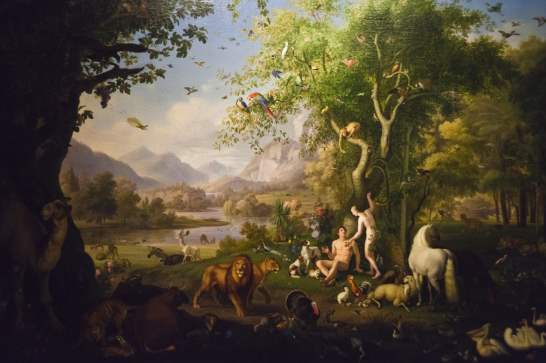 This is where sex began. God created Eve for Adam—not Adam for Eve. God created Eve to be Adam’s helper—not Adam to be Eve’s helper. God created Adam first, then Eve; and the significance of this for the authority of the man over the woman is opened up by the Apostle Paul when he commands:

But I do not allow a woman to teach or exercise authority over a man, but to remain quiet. For it was Adam who was first created, and then Eve. And it was not Adam who was deceived, but the woman being deceived, fell into transgression. But women will be preserved through the bearing of children if they continue in faith and love and sanctity with self-restraint.1

The world and much of the Christian church today thinks of this passage of God’s Word as toxic masculinity at its worst. Adam was created “first” and “then Eve”? So Adam is the first and Eve the second sex, right? Isn’t that precisely what Simone de Beauvoir wrote a book attacking, titled The Second Sex?

Beauvoir’s work was published in 1949 and it stoked a smoldering fire that now has grown into a worldwide conflagration, not just among unbelievers, but sadly (because we should know better) also within the Christian church and home. There’s not a marriage or family, not a husband or wife, not a father or mother, not a son or daughter, not a congregation or pulpit this wildfire has not singed and charred.

Precisely what is it de Beauvoir despised and attacked?

[I]n Genesis …Eve is depicted as made from …Adam. Thus humanity is male and man defines woman not in herself but as relative to him…

Legislators, priests, philosophers, writers, and scientists have striven to show that the subordinate position of woman is willed in heaven and advantageous on earth. The religions invented by men reflect this wish for domination. In the legends of Eve and Pandora men have taken up arms against women.2

The reader got that, right? “The religions invented by men.” She’s speaking of our most holy faith revealed by God in His Word.

Leaving Jean Paul Sartre’s wife Simone behind, let’s humble ourselves and tune our minds and hearts to God and His Word. There we read that, from the beginning—prior to the Fall—God made woman to be Adam’s helper, the helper that by God’s design is “meet” or suitable for him.

What is a helper?

A helper doesn’t lead. He follows. This is his gift to the leader. This is the helper’s orientation. The caboose doesn’t claw his way up the train to get ahead of the locomotive. Woman can’t honor God’s creation order and the sex God made her, then spend her life resenting that woman is man’s helper.

Here is the beginning of wisdom concerning marriage. Man was not created for woman, but woman for man. See how detailed God’s Word is concerning this creation order of Adam and Eve:

[Man] is the image and glory of God; but the woman is the glory of man. For man does not originate from woman, but woman from man; for indeed man was not created for the woman’s sake, but woman for the man’s sake.3

If the Holy Spirit had been concerned that the Church might grow confused about this in the late twentieth and early twenty-first centuries, how would we suggest He speak with greater clarity than He’s spoken through the Apostle Paul here in 1 Corinthians 11?

Of course, I’m being humorous because the answer any honest person who’s just read the verses above would give is that it couldn’t have been made any clearer than it’s made above. Perfect clarity and perfectly succinct. Objective, even, in the order on full display.

It’s easy to imagine someone reading this and reacting in anger.

Why put it so negatively? The point isn’t the order of the sexes, but the beauty of two persons loving each other and not having to go through life alone!

But there we have it: the Holy Spirit inspired the Apostle Paul to be very firm and clear on just that—the order of the sexes established by God at Creation—prior to the Fall while all things were still perfect.

I mention when this happened because there are many false shepherds seeking to harm your soul and that of your wife and children by preaching and teaching that the Order of Creation and the authority of man in relation to woman is not as God intended it. They foment rebellion, spreading the false doctrine that husbands being the head of the home is only a result of our sinfulness, which of course means it was the decay brought in to the life of man after the Fall.

God created Adam first, then Eve. In the Garden of Eden. Before the Fall.

The authority of Adam was no design flaw or failure. It was God’s perfect design feature, and thus His blessing. But not just for Adam. Also for Eve. His blessing not just for man. Also for woman. Contrary to what the whole world is screaming today outside and inside the Church, authority and submission are not a curse. We have received both from God back in the state of perfection, and thus they are our blessings.