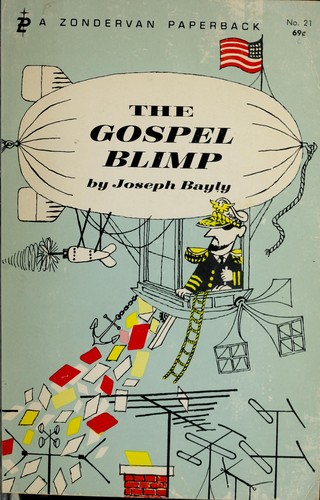 To Score the Point…

When Joe Bayly’s satirical novel, The Gospel Blimp, was published during the late sixties he expected a lot of criticism from the Christian community. Instead, most people responded positively.

“I personally think,” says Bayly, “if you get to the grassroots Christians they are ready to acknowledge the truth even it it hurts. I have sometimes thought my function was that of the little boy in Andersen’s story, The Emperor’s New Clothes. What I say everybody knows, but my saying it frees them up to agree and say, ‘Yeah, that’s true.’ ”

For Bayly, humor is one of the many ways that Christians have for telling the truth.

“Somebody has defined satire as telling the truth laughing. But sometimes it’s just telling it in such a way that people can laugh rather than be offended. I think, too, that humor when it’s in the written form enables you to tell the truth indirectly without the person realizing he’s involved. It’s sort of like a parable in that sense. You score the point without the reader realizing he’s in the game until after the point is scored. He doesn’t raise his defenses as he would if it were a dogmatic statement.”

Nevertheless, he admits writing humor for the Christian audience poses some problems.

“I think one problem is that Christians are very upfront and—I don’t like to say naive—perhaps, uncomplicated. They are not accustomed to being approached through humor or indirectly. I think they sometimes miss the point because of that. It takes a rather sophisticated audience to understand a teaching through humor. Some Christians take it just at face value. I’m not saying that’s wrong, just that it makes it difficult for a person who is trying to use humor with a Christian audience. You have to ask yourself, ‘Will they understand? Will they see that this is irony, this is really a hyperbole, an overstatement?”‘

Another problem for the writer of Christian humor, says Bayly, is “people tend to typecast you once you’ve done something.” After The Gospel Blimp was published he wrote a column for Eternity magazine about a Mennonite Thanksgiving service he attended in Lancaster, Pa.

“I wrote about what a deep impression the service and the various testimonies by these Mennonite people had made on me and my family. After publication I had a letter from one of the editors of a Mennonite publishing house who asked me to settle a disagreement some of them had about whether I had written a straight, reporting type column, or whether this was satire. I was horrified that anyone would think I would satirize such a beautiful experience.”

Bayly hasn’t written a book of satire since.

Bayly advises young writers of humor to go easy: “A small amount of humor goes a long way. Many people are inclined to overdo it.”

“Then, too, I think we always have to be sensitive to our audience. Be above reproach as far as the things we do and laugh about.”

If the Christian writer of humor must take care not to hurt others, the Christian audience might consider loosening up, Bayly says.

“Christian people take themselves too seriously. I don’t think we have a sense of whimsy, of laughing at ourselves in a loving way.

“For instance, Jewish writers will talk about the Jewish mother and her chicken soup and poke fun at her in a very loving way. You feel as though this is in a family. Well, I think the fact that we’re not freed up in our use of humor is shown by the fact that we probably could not poke fun at the evangelical mother and her foibles at all. It would be taken as an affront by most people, rather than a loving affirmation of what an evangelical mother is. If we would just let down and laugh at ourselves maybe those who aren’t Christians would feel that we’re more approachable.”

“I think it was Will Durant who once said, ‘Man differs from the animal in that he prays and he laughs.’ I’m not sure that’s the basic difference, but He has given us the gift of laughter. And as Ecclesiastes says, ‘There’s a time to laugh.’ I think that even in a serious situation, the laugh and the gift of humor are gifts from God.”

Bayly thinks the home is where lessons about laughter should begin. He quotes novelist John Updike: “My parents were inclined to laugh a lot and to examine everything for the fingerprints of God.”

“I think that’s a pretty good summary of what a Christian home should be. There should be a pervading God-consciousness, seeing God in the totality of life, but there also should be the fun aspect of being part of a family.”