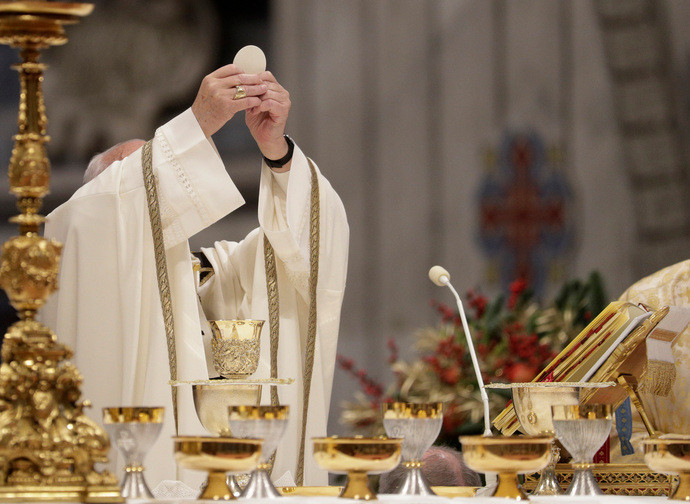 Hear the word of the LORD, you who tremble at His word: “Your brothers who hate you, who exclude you for My name’s sake, have said, ‘Let the LORD be glorified, that we may see your joy.’

For some time, I’ve been telling friends that I’m thinking about announcing I’ve converted to Roman Catholicism. A bunch of fellow students from Gordon-Conwell Theological Seminary during my brothers and my years there have, including firm Theonomist Scott Hahn and Marcus Grodi—both friends when we were getting our MDivs.

After announcing it, I’d wait for the reaction and the questions sure to be asked: “But why? Do you really think Rome is right? Do you think the Reformers were wrong? How COULD you?”

When I was sure the full weight of the thing had settled on them, I’d tweak it a bit: “Actually, I haven’t really converted to Rome. I just told you I had in order to get your attention. And now that I have it, let me tell you that I am a Reformed Biblical Christian—something that is so different from the Protestant, Evangelical church in the West today that converting to Roman Catholicism is actually less of a stretch than my real conversion which is to historic Reformed Biblical Christianity.”

There’s a problem today needing to be stated publicly. If unmet expectations are the cause of much conflict in groups, then historic Protestant and Reformed churches still adhering to the commands of Scripture at this late date should take steps to protect newcomers to their congregations from confusion and irritation. Take, for instance, students from Wheaton, Taylor, Calvin, Covenant, BIOLA, Masters, or from congregations like Tenth Presbyterian Church and Park Street who arrive for their grad program at Indiana University.

After three decades of experience now, I can say without fear of contradiction that when such men and women move into our community and visit Trinity Reformed Church, they will be scandalized and nine out of ten of them won’t be back. Why not?

Because growing up in Evangelical and Reformed churches and frequenting Evangelical parachurch ministries and listening to Reformed celebrity preachers and attending Evangelical and/or Reformed schools and colleges has taught them to explain away every text of Scripture that is a hammer or fire. It has led them never to expect their pastor to repeat the Apostle Paul’s words of warning in the institution of this sacrament recorded in 1Corinthians 11, nor to receive and take heed of any slightest caution that the blessings of the sacraments carry terrible dangers with them. They have learned never to tremble in the fear of God. So when they visit Trinity Reformed Church, what scandalizes them is the restoration of these things—the very things that ought to be the most precious birthright of every covenant child, yet now are nowhere and never passed on.

Tremble, you women who are at ease; be troubled, you complacent daughters; strip, undress and put sackcloth on your waist. (Isaiah 32:11)

So no, I haven’t converted to Roman Catholicism, actually; but rather, something much further from Gospel Coalition, Nine Marks, Wheaton, Westmont, Moody, Tenth Pres., Covenant, Calvin, and Park Street than the Vatican.

Rather, from my prior Wheaton and Gordon-Conwell days and churches, what I’ve converted to—what our congregation has converted to—is the preaching of God’s Law, trusting it to be the schoolmaster to Jesus Christ. We have been converted to reading Bibles that have God’s actual words rather than deleting and changing those words to make Scripture more palatable to social media slaves whose highest moral aspirations are to removing from themselves any slightest word or thought that is not entirely politically correct. We have been converted to preaching—we don’t just teach. We have been converted to preaching to the conscience. To the heart. We no longer aspire simply to fill precious souls made in the image and likeness of God with helpful truths for the next week, but to call such precious souls to see the holiness of God, their own sin, and to allow themselves tears of true repentance. We have returned to the historic Reformed church’s faithful call to God’s people and their covenant children to depend upon the converting work of the Holy Spirit. We have returned to kneeling as we pray. We have returned to sermons longer than twenty minutes because we hunger for the bread of life.

Now don’t judge me for this explanation, saying I’m bragging. That’s not my goal.

If you too would like to see your church reformed—to see the Reformation’s Biblical simplicity and fear of God restored—may I suggest our little book, Church Reformed? It provides the simple agenda. It’s taken from Scripture.