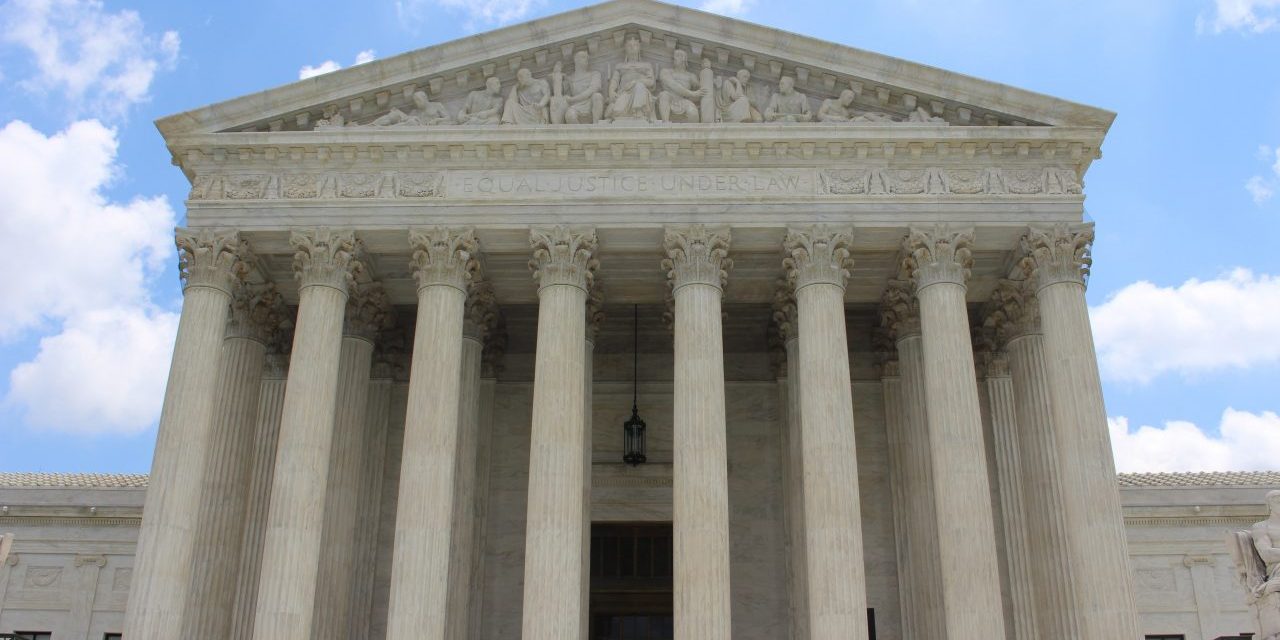 Many years ago, I worked in a Midwest law firm, practicing business and appellate litigation. From time to time, one of the partners would warn darkly of the pendulum swing from liberal to conservative judicial decisions. If the pendulum swung too far right, he cautioned, it may provoke a compensating backlash even further to the left.

I could conceive of action leading to reaction and, at times, over-reaction. But what that idea had to do with the post-New Deal Supreme Court I hadn’t the foggiest clue. As far as I could see, there was no judicial oscillation. Nary a round trip. The Court just keeps sailing further and further from the Constitution and never returns to port.

The only things that do seem to change about the Court are: (1) its speed toward radicalization, and (2) the sort of victims left in its wake. Slaves, sterilized “imbeciles,” Japanese-Americans, the unborn, a childhood inundated with pornography, victims of violent crime and their families, homosexuals, transgenders–all these victims of past SCOTUS cases are so much flotsam and jetsam to our SCOTUS admirals. Some of these victims SCOTUS heaved over the side into the deep. Others of them SCOTUS at first made a show of saving but then left bobbing in the waves clinging to an untethered life preserver. Think homosexuals and transgenders who believe they’ve found liberation in Obergefell and Bostock when they’ve only reinforced their chains.

Curiously, the number of conservative textualists and originalists on the SCOTUS bridge at a given moment doesn’t seem to cause the ship to change, much less reverse, course. They triple-check their compasses, squint toward the horizon for landmarks, and take careful soundings. Still, U.S.S. SCOTUS sails on ever leftward, oblivious to their pedigrees, unmoved by their painstaking ministrations. These conservative justices leave some lay observers, i.e., normal people looking on from shore, wondering whether they have any more effect on the vessel than a toddler harnessed in his car safety seat, spinning a toy steering wheel.

When I was in college, one of my professors–in a patrician accent resembling Thurston Howell III–would occasionally refer to a student as “feckless.” He wasn’t abusive, but neither was he complimentary. Instead of promoting a favorite sports team, this professor’s rectangular license plate ring announced: “Caretaker of the feckless.” I came to learn the original meaning of the word as someone or something that has no effect.

When I think of all the judicial candidate vetting, Senate sherpas, nominee hearings, barrels of ink spilled on originalism and textualism, Federalist Society panels, coy demurrers at Senate confirmation about cases that could come before the Court, baseball metaphors for judging, I can’t help but think “feckless.” After 50 years, we still have abortion and we now have the complete federal takeover of healthcare and the nationwide imposition of homosexual marriage. Last year, Justice Gorsuch rewrote Title VII to cow businesses and local governments into acting as if men and women have a federal right to mutilate themselves and deface the sex God assigned them at conception. Looming over the horizon is a gag order to churches and Christian schools to maintain strict pulpit and classroom silence about Biblical sexuality, manhood and womanhood, and God’s Fatherhood.

So, in the face of President Biden’s plan to pack the Court, I don’t find my blood pressure rising. How much worse can it get? I don’t mean to be flippant or ungrateful for a few victories along the way. For instance, I had hoped the overturning of the Gun Free School Zones Act would be a stepping stone to restoring the original Commerce Clause, not an aberration. But after that 1995 decision it was pretty much crickets until we got nationalized healthcare less than two decades later. Yes, I realize five justices in the first Obamacare case seemed to restrict Congress’s Commerce Clause power while at the same time a different combination of five justices upheld Obamacare. So, Mrs. Lincoln, other than that, how was the play?

Perhaps this is an opportunity. Maybe some good could come from this commission–even if its only usefulness is precedent for a future commission. In anticipation, here are my recommendations to the current or future Presidential Commission on the Supreme Court of the United States. What’s needed from our judges, or at least the ones who are not yet in thrall to the Times‘ deceitful kisses? Answer: a simple willingness to die. To go down with the ship, after helping as many steerage passengers as possible to clamber aboard the lifeboats.

What does dying look like? To begin with, what about advocating for Congress to restrict Supreme Court jurisdiction to hear particular cases under its authority granted in Article III, Section 2, Clause 2 of the U.S. Constitution? No more federal cases on abortion, marriage, or transgenderism. Instead, Congress, by a simple majority vote, passes a nationwide ban on abortion and a democratic nullification of Roe, Obergefell, and Bostock. Also, how about advocating for Congress to abolish certain lower federal courts whose buttinsky occupants think they preside over a roving commission to do good? If Congress has authority to “constitute” and “ordain and establish” lower federal courts (Article I, Section 8, Clause 9; Article III, Section 1), it has the power to disestablish and reorganize them. Sure, some of these benched judges from abolished courts, with a sudden increase of free time on their hands, might still insist on taxpayer-provided salaries and fringe benefits for life. These entitled ones can be transferred to the federal tax court or a patent court to earn their keep.

Like an indulgent parent, Congress has for too long allowed its progeny to run amok. I refer to the lower federal courts Congress has created and the appellate jurisdiction it has conferred. Through its repeated abdications, Congress may be just as culpable as the judges who consider themselves Enlightened Guardians of Democracy. But Congress is such an easy target for ridicule, especially the rube representatives from Flyover America who don’t get with the Beltway program. Maybe there is a reason beyond just deserts that Congress perennially enjoys basement-dweller status in public opinion polls? Perhaps because it’s the federal body that has the potential to be the most responsive to the people and the most resistant to the Administrative State and federal courts.

Here are other ideas for dying. Men of goodwill in Congress and men of goodwill occupying or pursuing the federal bench need to help each other. You judges and judicial candidates can do this by disavowing Marbury v. Madison and allowing the possibility that federal courts aren’t always right because they’re final. Nor are they final because they’re right. In fact, they’re often disastrously wrong and the democratically-elected branches are right and have also taken an oath to uphold the Constitution. How about also honoring God’s Word in your decisions? Or adopting a meek willingness to be hated and vilified by all the self-important people because of your love for this country and her oppressed?

Any one of you who did that would die a hero’s death.

(Photo by Claire Anderson on Unsplash)