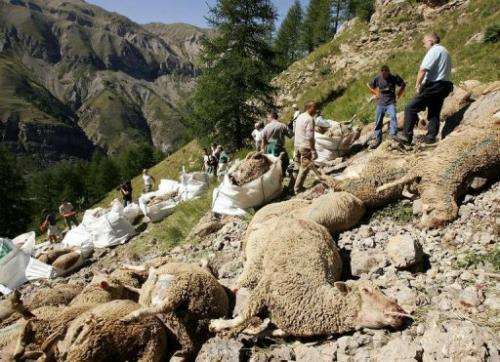 I imagine some might consider my tweet earlier today condemning James Smith, a Calvin philosophy prof, to be harsh. Likely it seems that way to many Christians of our time, but let me explain.

Scripture is filled with warnings against false shepherds, false prophets, and wolves. Are there such men and women today?

It can hardly be otherwise. Just now, all these warnings cannot be focussed simply on skinheads and racists, abusers, and haters of sexual minorities. Otherwise, the people of God and worldlings would be agreed on who is righteous and who is evil. We know that can’t be so.

Nor can these warnings be limited to the men and women within Christian churches who deny the substitutionary atonement, regeneration, the Virgin Birth, or the resurrection—in other words run-of-the-mill liberals who claim the Christian identity while denying Scripture’s most precious truths.

Following Machen’s Christianity and Liberalism published a century ago, pretty much every conservative Christian has agreed liberal Christians are no Christians at all. Of course, this is yesterday’s battle and it’s the weak shepherd often complicit in the evils of his own day who specializes in beating his chest over dangers his heroes exposed and condemned in past centuries.

Banner of Truth has given us wonderful volumes from bygone eras, but the servant of God doesn’t limit himself to burnishing dead men’s lances and swords, then laying garlands at their tombs.

Reformed men teaching at Dutch institutions like Calvin are not judged on their effectiveness in retelling dead men’s war stories, but on their own engagement of present enemies using the full power of their knowledge, intellect, and character. If he does it in such a way that he enjoys almost-universal applause of the sort Jim Smith is so desperately seeking, we need know nothing else.

The servant is not greater than his Master. If they hated Him, they will hate His servants, also. Every church officer desiring His Master’s approval learned during his first year of guarding the good deposit and the flock of God that when the world approves, it should make him uneasy. 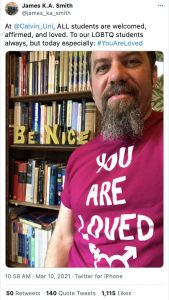 It would be hard to imagine anyone denying that this Calvin philosophy prof named James Smith very, very much desires the world’s approval. His sign on his bookshelf, his beard, his shirt and its message, and the text of his sweet tweet are of a fabric saying nice things in service of his nice god who would never breach the boundaries of niceness as our cultural elites now define them.

Is this really what is left of Reformed doctrine and Biblical Christianity in Grand Rapids? Has any other philosopher there in Grand Rapids been astute enough to see the damage his colleague is doing to tender souls, and to condemn this Jim Smith for it? Has any trustee at Calvin called for Smith to be fired? Is any publisher there in the homeland of Continental Reformed faith seeking to acquire a manuscript which will expose this wickedness as precisely and firmly as Calvin and Luther exposed Rome’s sacramentalist idolatry?

Or are all the philosophers, publishers, and pastors of Grand Rapids on board with Smith placing stumbling blocks in the path of God’s little ones? This is the warning Jesus gave:

Whoever causes one of these little ones who believe in Me to stumble, it would be better for him to have a heavy millstone hung around his neck, and to be drowned in the depth of the sea. -Matthew 18:6

Has James Smith read this warning? The other members of his department? Calvin’s administration? Smith’s pastor? His wife? Do any of his children tremble for their father and those sheep he is destroying?

Don’t ever forget that those claiming the Name of Jesus who promote the acceptance of effeminacy, sodomy, lesbianism, bisexuality, transgenderism, and everything queer and questioning are silencing the consciences of all the little ones who have been lied to by the prophets of Baal in control of the organs of communication across Western culture today. All these prophets are united in their message to such tender souls suffering under the temptations people such as James place before them that these sins are no sin at all, and that anyone calling them to flee God’s wrath against such ungodliness is a hater.

While James preens himself as a lover.

He isn’t. James and all who give him accolades are the real haters and it would be better for James to have a heavy millstone hung around his neck, and to be drowned in the depth of the sea. He is placing stumbling blocks in the path of immortal souls tempted by the horrors of LGBTQism, and for this he will answer to God Almighty.

Does anyone not see this—anyone left who fears God and honors His Word, that is? (If you’re confused, read our book The Grace of Shame: 7 Ways the Church Has Failed To Love Homosexuals. I think you’ll find it helpful.)

Speaking of such men as James who were using the Name and church of Christ to hide within as they devoured the souls of God’s sheep and lambs, the Apostle Paul demanded that men of God shut their mouths:

For there are many rebellious men, empty talkers and deceivers, especially those of the circumcision, who must be silenced because they are upsetting whole families, teaching things they should not teach for the sake of sordid gain. …To the pure, all things are pure; but to those who are defiled and unbelieving, nothing is pure, but both their mind and their conscience are defiled. They profess to know God, but by their deeds they deny Him, being detestable and disobedient and worthless for any good deed. -Titus 1:10-11, 15-16

He must be silenced.