One pastor’s godly witness in Louisville 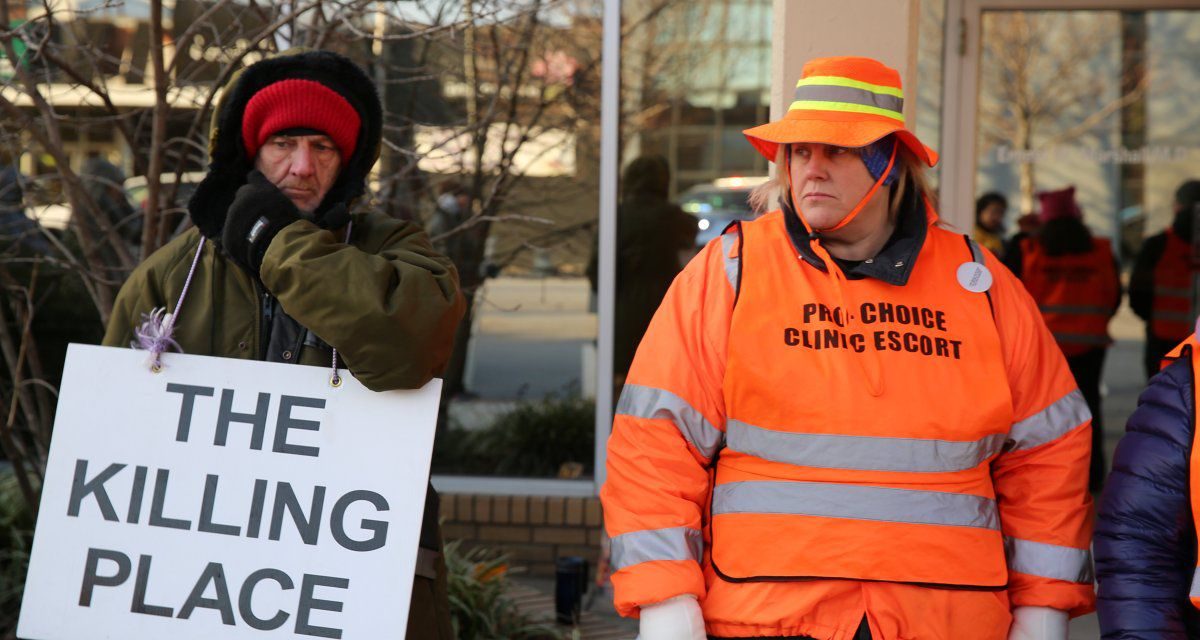 Pastor Joseph Spurgeon is a regular preacher and sidewalk counselor/protester outside the abortuary in Louisville. Recently the bloodthirsty ones again got the civil authorities to implement a buffer zone intended to squelch the protesters’ First Amendment rights of free speech. In the wake of this violation of the Constitution, a local reporter reached out to Pastor Spurgeon with some questions.

Pastor Spurgeon kindly sent me a copy of the questions and his responses and, appreciating them very much, I asked him if we could post them here on Warhorn—to which Joseph kindly agreed.

Greetings in the name of the Lord. I hope this email finds you well. This is Pastor Joseph Spurgeon and I would be happy to give some answers to your questions. Here are my responses:

1. Why do protesters continue to gather downtown in front of EMW, and what message are they hoping to send?

We believe that children are gifts from God and that they like all people are created in the image of God. Preborn children have value and human dignity and therefore they should not be slaughtered and discarded like trash. We also believe that God has called his people to protect the weak and needy and to stand up for these children. We come down to EMW to speak up for children who are scheduled for destruction.

We also believe that God is good and for those who cry out to him in the name of Jesus, they will be saved from their sin and be empowered to do what is good while turning their backs on what is evil. We go down to EMW to proclaim this good news to the women coming in in the hope that they will turn from their decision to murder their baby and instead choose life. Out of love for both mothers and children, we offer them financial assistance, adoption, and other resources. So to summarize the message we want to send, it is twofold:

There is hope found in Jesus.
Children should be protected and not murdered.

2. How would a safety zone infringe on that ability?

We support making that whole area a safety zone for preborn children. Children should not be murdered. If the city council was concerned with safety they would shut down EMW and Planned Parenthood, arrest those who work putting babies to death, and speak truthfully about pregnancy so that no woman would ever be tempted to believe the lie that abortion is healthcare. As far as the attempt to infringe on religious and political speech under the guise of safety, we oppose it. These buffer zones are unconstitutional but worse than that they are ungodly and unjust attempts to protect murder.

3. Do protesters regularly wear masks and social-distance? If not, why not?

Some wear masks and some don’t. You would have to ask individuals why they do or do not.

4. We’ve heard concerns from some folks, including council members, about the risks of COVID created by unmasked, non-distanced protests – is that a concern that Sovereign King shares? If not, why not?

The abortion clinic and its supporters have been pushing for a buffer zone long before COVID, so we see through their efforts to politicize Covid and use it to impose something that Louisville has rightfully rejected twice already. Furthermore, where was this concern when our city was burning last year during riots?

Let’s be honest and stop playing games, abortion is murder. The lesson we ought to be learning from Covid is that God is sovereign, and He can and will judge this nation and our city for its continued rebellion against him. We butcher 3-4 thousand children in downtown Louisville every year. We promote sexual immorality up and down our streets.. We have gone so far off the rails that we don’t even know the difference between a man and a woman anymore. And yet we think we can give the middle finger to God even after Covid has taught us that He is in control.

May we all repent of our sins. May the City Council of Louisville stop playing God and humbly and sincerely lead the city to cry out for the mercy of God through Christ Jesus. There will be no true justice, no true peace, no true safety, and no true health until we do so.

5. Some escort volunteers said local protesters seem emboldened in recent weeks by the presidential election and Jan. 6 Capitol rally/riot. Would you agree with that?

Liberals always accuse others of what they themselves do. They murder babies and accuse those opposed to it of violence. They burn down businesses and assault police officers all summer long, and then accuse prolife Christians, who had nothing to do with January 6th and who have condemned both it and the BLM riots, of being rioters. When it is liberals that took control of both chambers of Congress and the Presidency, and when it is liberals using these things to shut down and cancel dissenting voice which are opposed to them, it is a bit disingenuous to accuse simple Christians who love their country and their city of being emboldened by a stupid rally at the Capitol that accomplished nothing but bringing shame on those involved.

To answer your question then, it is the left that has been emboldened by these things. Any boldness we have comes from the Lord Jesus who taught us to love our neighbors as ourselves and who promises to be with us till the end of the Age. Christ Jesus died for our sins so that we not be condemned but have eternal life. And because we have eternal life, we can lay aside the cares of this world to rescue children from death and preach good news to sinners. The God who judges nations is a Father to the fatherless. He is a refuge in times of trouble. Because of the death, burial, and resurrection of Jesus, those who trust in Him have access to God. Mothers considering abortion can entrust to Him their futures. They can trust Him when He says children are a blessing. They can believe Him when He says He will never leave or forsake them. They can hold fast to His promises. They can turn away from a place that makes money killing children.

They don’t have to cut off their own posterity and do grave harm to their own souls. They can fulfill their calling as mothers, as live-giving nurturers. They can know the joy of having their own son or daughter say I love you. And they can have the unspeakable hope that no matter what happens in this life, they have a life full of the richest and choicest blessings ahead of them in eternity. They can do all this with the added benefit of having other Christians gladly walk with them through it all. Again, may Louisville turn from its foolish and wicked rebellion to the most kind and almighty God. May we humbly bow before King Jesus and know the joy of life.

Thank you (Jane Doe) for the opportunity to share these things with you and your readers. I hope you will fairly and accurately report on this story. May the Lord Jesus richly bless you.