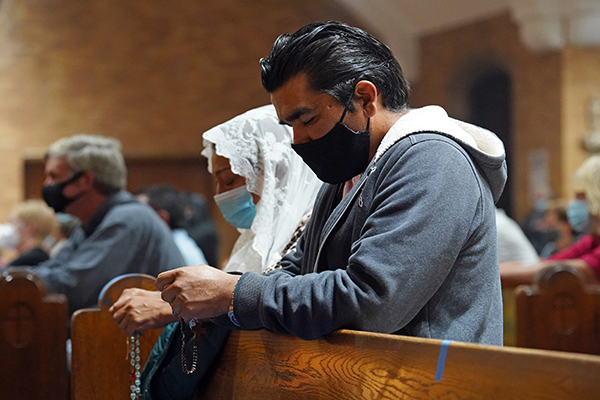 Four years ago, the Church here in North America was already angry. Wives and daughters could not believe their fathers and brothers had voted for Donald Trump. Although the pro and con-Trump sides put all their emphasis on morality, what became more clear as time passed was that both sides came to differing political judgments. We didn’t much disagree concerning the morality of the two candidates personally, or their party platforms. What we differed over was political strategy.

Since then, the church has grown even angrier, and although a few years ago it was mostly directed against the deep state, Democrats, the elite and their mainstream media, one year ago when God lowered Covid on us, the anger exploded.

Tragically, we took our anger out on church and civil authorities who were working very hard to assess the risks and apply the right remedies to their flocks.

It was almost a year ago now that many pastors began to preach and teach the Biblical command to honor and submit to authority, warning against online personalities and podcasters calling for the opposite. Sadly, this often had the opposite effect to what was intended as any call to honor and respect authority became the litmus test of who to be angry at, inside the church. Those pastors who, surveying the dangers Covid posed to their flock, preached the duty to submit to the civil authority simply alienated the rebels and, being rebellious against their pastor’s faithful preaching, they spun themselves out of their church fellowship and found another congregation they judged more congenial to their temper.

Their pastor was wrong. They had it right.

There were lots of loud voices online kindling the fire. They were encouraged to leave their fearful, faithless, uninformed, compliant elders and pastors listening to bad science and find a church where the elders and pastors had backbone, were principled, truly reformed, bold, faithful, informed, and therefore…

So there was a massive transfer of angry men and their families from one church to another, and among these fathers and their families, masks became the dividing line between the rock-ribbed conservatives who honored our Founding Fathers and, in the other corner masked, the liberal half of America.

These rebels’ battle cry was that masks were the sacrament of idolatry and those who submitted to the civil authority by wearing them and asking others to do the same were encouraging idolatry. But the accusation of idolatry didn’t turn out to be quite strident enough, so then the scare tactics were raised to another, even-more-absolute level by declaring that masks efface the image of God.

Some pushed back on such schismatic claims, but there were no retractions. Only modulations good enough to fool sheep who, reading them, pronounced to all the other sheep that the leaders of the rebellion weren’t really serious about the mask being a sacrament, the mask being idolatry, and the mask eviscerating the image of God in man. Pastors were misconstruing what their online personages were actually saying. Then they blithely trotted out the modulations using them to demand pastors stop quoting their heroes most direct statements, but now quote only their cuddly ones.

It is undeniable that over the past year Covid has become the dividing line inside and outside the Church. Either you’re for masks or your against them. Masks became the shibboleth, the loyalty test, the flag.

In such a polarized climate, woe to the pastor who preached respect and submission to authority while calling out the schismatics for causing the sheep to scatter from their shepherds.

Obviously Covid is a litmus test of much that is important, and as with all disciplines visited on us by God, it reveals the secrets of men’s hearts. But this is equally true for everyone.

What we all must admit is that Covid reveals Nanny-state one-worldism no more nor less than it reveals disrespect for authority and rebellious hearts.

Which is the reason we must stop our schisms over masks, quarantine, and Covid.

Masks are no sacrament. Those church authorities who ask you to wear them are not calling you into idolatry. Masks do not efface the image of God.

Dividing over masks is schism and is to be condemned in the strongest terms. Calling people to change churches because of masks is sin. Implying or teaching the mask policy or practice of the church a man or woman attends indicates the church also has unfaithful preaching of God’s Word, unfaithful administration of the sacraments, and unfaithful exercise of church discipline is demagoguery.

We are headed into even worse days, as any Christian half-alive and observant knows now just a few days after the inauguration of President Biden. Personally, I do not know how our nation remains the United States. We have long been in the middle of a civil war by other means, and we have long had the streets of our cities running with rivers of blood crying out to God for vengeance. Our crimes against God are every bit as wicked as the Canaanites God commanded His sons of Israel to wipe out as they entered the Promised Land; every bit as evil as the crimes of the Sodomites whom God rained fire and brimstone upon, burning them up. It was forty years ago or so when Billy Graham’s wife, Ruth, said “If God does not judge America soon, He’ll have to apologize to Sodom and Gomorrah.”

What we must not do as the people of God is gain for ourselves a reputation for rebellion against authority whether that authority is civil or ecclesiastical. As Titus 2 warns us, such actions and attitudes against authority cause the Word of God to be maligned.

But refusing obedience to our elders over secondary matters, preening ourselves over how principled we are and how anyone who differs with us and our party is a lazy stupid sheep with submission syndrome?

That’s another completely different thing. Such divisions ought not to be among God’s holy people.

We are to speak with honor and respect to and about those God has placed over us in positions of authority whether husbands, fathers and mothers, bosses, teachers, commanders, rulers, presidents, or elders, deacons, and pastors. Yes, they are sinners and often make bad decisions, but respect and submission start when we disagree. Anyone who’s ever been under authority or exercised it knows personally how hard it is to honor and respect authority. Unbelievers and believers both find it very difficult, which is the reason Scripture warns us so very often and in the most intense ways to speak respectfully and submit to authority so very often.

Yes, there are times to disobey. There are “we must obey God rather than man” moments in our lives, and likely those moments will increase in frequency in the coming months and years. We all see and are, together, suffering the increasing constriction of the Christian voice and conscience in American life, and it will be difficult for the church to agree over when and where and why to disobey. The early church had the same problem, so we can study and take hope and wisdom from them. Also from the Reformers and other ages and places in which the Church has lived, and lives, under the persecution of godless rulers.

But keep in mind that it was under the terribly wicked Roman Emperor Nero who lit the night in Rome by the light of Christians set afire on stakes that the Apostle Paul, writing that very church in Rome, commanded us:

Every person is to be in subjection to the governing authorities. For there is no authority except from God, and those which exist are established by God. Therefore whoever resists authority has opposed the ordinance of God; and they who have opposed will receive condemnation upon themselves. For rulers are not a cause of fear for good behavior, but for evil. -Romans 13:1-3