Why do you work? 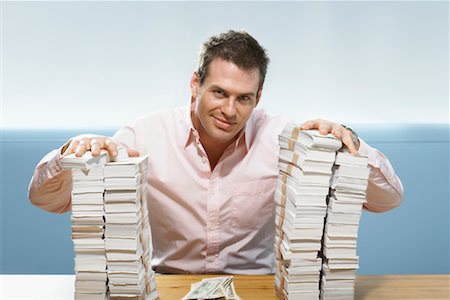 Calidus has traded above thirty years in the greatest city of the kingdom; he has been so many years constantly increasing his trade and his fortune. Every hour of the day is with him an hour of business; and though he eats and drinks very heartily, yet every meal seems to be in a hurry, and he would say grace if he had time. Calidus ends every day at the tavern, but has not leisure to be there till near nine o’clock. He is always forced to drink a good hearty glass, to drive thoughts of business out of his head, and make his spirits drowsy enough for sleep. He does business all the time that he is rising, and has settled several matters before he can get to his counting-room. His prayers are a short ejaculation or two, which he never misses in stormy, tempestuous weather, because he has always something or other at sea. Calidus will tell you, with great pleasure, that he has been in this hurry for so many years, and that it must have killed him long ago, but that it has been a rule with him to get out of the town every Saturday, and make the Sunday a day of quiet, and good refreshment in the country.

He is now so rich, that he would leave off his business, and amuse his old age with building, and furnishing a fine house in the country, but that he is afraid he should grow melancholy if he was to quit his business. He will tell you, with great gravity, that it is a dangerous thing for a man that has been used to get money, ever to leave it off. If thoughts of religion happen at any time to steal into his head, Calidus contents himself with thinking, that he never was a friend to heretics, and infidels, that he has always been civil to the minister of his parish, and very often given something to the charity schools.

Now this way of life is at such a distance from all the doctrine and discipline of Christianity, that no one can live in it through ignorance or frailty. Calidus can no more imagine that he is “born again of the Spirit”; [St. John iii] that he is “in Christ a new creature”; that he lives here as a stranger and a pilgrim, [1 Pet. ii. 11] setting his affections on things above, and laying up treasures in heaven, [Col. iii. 1] —he can no more imagine this, than he can think that he has been all his life an Apostle working miracles, and preaching the Gospel.

It must also be owned, that the generality of trading people, especially in great towns, are too much like Calidus. You see them all the week buried in business, unable to think of anything else; and then spending the Sunday in idleness and refreshment, in wandering into the country, in such visits and jovial meetings, as make it often the worst day of the week.

Now they do not live thus, because they cannot support themselves with less care and application to business; but they live thus because they want to grow rich in their trades, and to maintain their families in some such figure and degree of finery, as a reasonable Christian life has no occasion for. Take away but this temper, and then people of all trades will find themselves at leisure to live every day like Christians, to be careful of every duty of the Gospel, to live in a visible course of religion, and be every day strict observers both of private and public prayer.

-William Law, Serious Call to a Devout and Holy Life.