A couple years ago, while speaking and preaching at Faith Presbyterian Church (PCA) in Anchorage, Alaska, Mary Lee and I also met Pastor Jack Phelps and his wife, Debra, who serve Covenant Bible Church (CREC) north of Anchorage, in Palmer.

What a joy. We had time with their men’s fellowship group, Jack invited me to preach Sunday morning, then following the service, there was good food and fellowship with the congregation after which we went back to the Phelps and talked until late afternoon.

Since meeting that weekend, Jack and I have talked several times, and I’ve developed affection and respect for this wise father of the church.

Some readers know how disappointed I’ve been with a number of conservative Reformed pastors who have wasted the Covid year belligerating or ranting against our civil authorities, building a podcasting and social media constituency by channelling the bitterness and anger of their own and other shepherds’ sheep.

One of the points I’ve tried to make is that none of these men have the slightest experience serving as a civil authority. They are merely church authorities dabbling in a world they are not called to, regularly demonstrating their cluelessness concerning that world’s challenges of leadership and the laws which govern it. 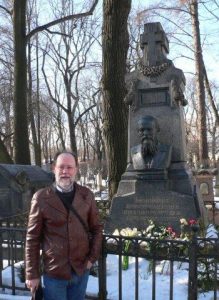 This is pertinent to this post because Jack Phelps (at Dostoyevsky’s tomb) is the opposite. In his seventies now (and still serving his church), Jack has given many years to civil service and presents a stark contrast to these railers against authority. None of that from Jack, and not because he’s a lesser man with lesser wisdom and discernment concerning politics and the law.

This from his church bio:

An Air Force veteran of the Vietnam war, Phelps has worked as a miner, a logger, a mechanic, a journalist, as professional staff for the Alaska State House of Representatives and the United States Senate and as an adviser to four Alaska governors.

A while ago, Jack also was elected and served as the presiding (national) minister of the CREC, so he’s the rare father who should be listened to carefully today because he’s earned his stripes in both civil and church authority.

With that as a preface, a couple days ago Jack and I were catching up by phone and he mentioned he’d preached a sermon the previous Lord’s Day calling for trust in God in our present time, not giving ourselves to anxiety, fear, and anger. I asked him to send me a link so I could listen, and just now I did.

What a helpful sermon!

Jack doesn’t tell you how many books he’s read or look for opportunities to dazzle you by his rhetorical chops. Rather, he’s that hardworking, cheerful man who has spent so many years satisfying his intellectual curiosity that he’s become erudite. And happily, he’s done so without developing those smelly diseases often accompanying erudition called pomposity, priggishness, and pedanticism.

Listen to this sermon on the Apostle Paul and Silas singing/praying the Psalms in the Philippian prison. How very helpful. Would that God would give all of us called to preach the same love and service to His Word and flock heard in this sermon feeding the flock in such an unprepossessing manner.