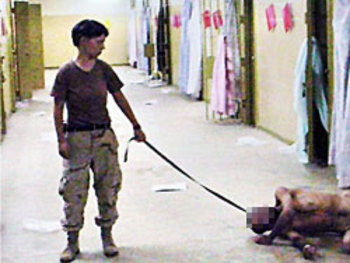 News of American soldiers mistreating Iraqi prisoners in Abu Graib is flooding the world. What no one (at least no one in the western media) seems to be commenting on is the peculiarly sexual nature of the abuse–nakedness, simulated sex acts, genital torture.

It’s even more sobering to note that in pictures where American soldiers are present, the leering, ridiculing Americans lording it over Iraqi men are women–sometimes with a man standing behind them as though to guard them, but the provocateurs in all the pictures I’ve seen have clearly been female.

Several striking thoughts arise from this.

First, one of the key arguments against women in the military is the sexual abuse they might suffer if captured. We never considered the possibility that they themselves might inflict sexual abuse on their male captives. It’s ironic that sexual mistreatment of POWs has not been common in past male-dominated conflicts. Other forms of POW abuse have been common, but sexual abuse was a relative rarity until women entered the military.

Second, such abuse of men by women puts a visible face on the largely ignored phenomenon of female abusiveness in society as a whole. Feminism teaches that women are nurturing and peace-loving while men are war-like and abusive. Sociological research, however, reveals that women are every bit as likely to mistreat others physically as men. Sin of every sort is equally distributed among the sexes. There is no uniquely male or female form of sin. 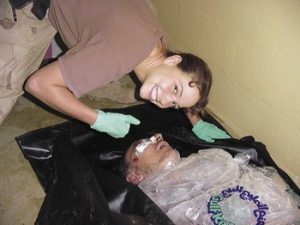 Third, is it just me, or does anyone else suspect there’s a connection between the general in charge of the unit cited in the abuse of the Iraqi prisoners being a woman and such behaviour? What kind of women want to oversee male prisoners? The kind who would do this kind of sickening deed, I suspect. And in a feminized chain of command such misdeeds are more likely to be winked at.

The feminization of the American military is a tragic crime against God’s creation order in which man is called to protect and lay down his life for woman. And we will justly bear His wrath for our rebellion against His will.