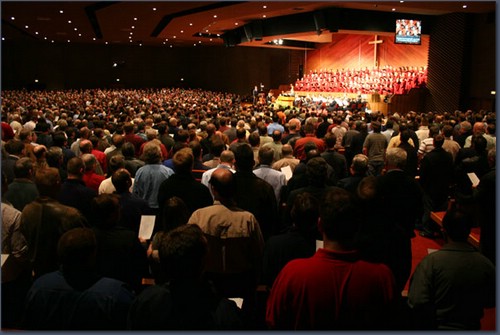 Likely the elders of LA’s Grace Community Church did the right thing in proceeding with worship services in civil disobedience against laws prohibiting them doing so. They did not trivialize their disobedience by drawing the line at face masks, but set a good precedent for future Christian responses to the persecution of the Church.

Here at Warhorn Media, we have produced a critical text of the best book on the persecution of the Early Church, and it has been of considerable help to us as we’ve thought through the coming darkness COVID-19 has wakened many Christians to. Read the book if you haven’t. It’s excellent, and one of the things most noteworthy in it is the similarity of our coming persecution to that suffered by the first few centuries of the church who were persecuted and martyred for crimes against the state. Sound familiar?

Almost always, the charges against them were only two: atheism and sedition. How could it be that Christians were universally seen as anti-God and anti-state? Get the book and read it.

Back to Grace Community Church. Today is the day after, so I’ve decided to post part of an exchange I’d been sitting on for a few weeks. It’s between one of our elders who served in the Pence administration here in Indiana as Budget Director and an elder of another Presbyterian church who holds the terminal degree and serves as a civil authority in the public health arena.

I hope readers find it helpful.

[Concerning] MacArthur’s statement, it glossed over a few areas that are important to recognize in sphere sovereignty. It’s neat and tidy and is able to achieve that condition by overlooking a lot of history and ignoring complicated pastoral realities. The messiness of competition and jealousy and inevitable conflict between the spheres is just the beginning. I think our statement on sphere authority does a good job of explaining these historical conflicts and pastoral realities.

First, he takes the position that the church never has to obey any public health order. A church shepherd’s response is simply a matter of voluntary compliance—noblesse oblige. Having read several contemporary accounts of quarantines in difference cities during the 1918 Spanish Flu epidemic and 1893 Muncie Small Pox epidemic as well as primary source legal documents, I can say this is the first time I’ve encountered this position. Perhaps it’s not surprising given their congregational commitments to an “autonomous” church “free from any external authority or control.”

Second, in recounting church history, there’s no mention of the civil government’s interference in worship—including the administration of the Lord’s Supper—in Calvin’s Geneva. He mentions the Genevan conflict and the “fending off”of the magistrates but omits specific details that would undermine his position.

Third, he overstates his case in the bargain, accusing other pastors of abdicating their responsibility for following such orders. So all pastors and elders throughout church history who have obeyed quarantines—rather than engage in voluntary compliance—are guilty of abdicating their office? He should have made room for men of good will to disagree on this.

Fourth, his accusations give aid and comfort to other Christian leaders who have been railing against the civil authority the past few weeks and months. There is no warning against their excesses, which may pose as serious a risk to Christians as the officious civil magistrates he condemns.

All that said, I don’t know what I’d do if Trinity were in California and we faced another indefinite closure. I don’t know what our pastors and elders would do. But I’m pretty sure we would not go into battle with his statement.