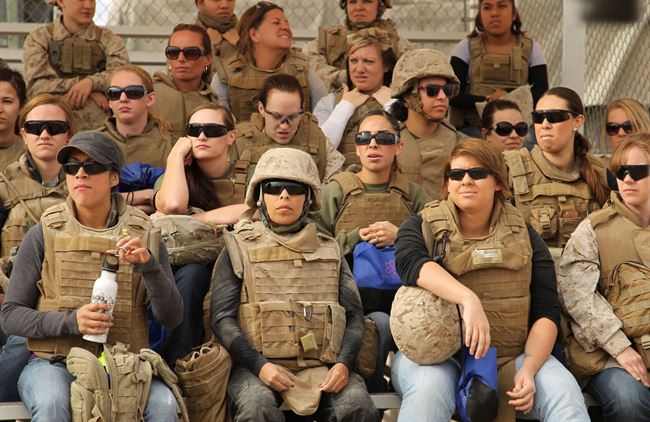 The Council on Biblical Manhood and Womanhood (CBMW) recently released a statement against what they termed “female military conscription.” Here is the statement with my comments interspersed (in brackets and italicized).

The Council on Biblical Manhood and Womanhood (CBMW) stands unequivocally against conscripting America’s daughters into military service. [Any conscription to any military service? Intentional ambiguity here, leaving to the side the distinction between support services such as clerical and healthcare services, and combat.] Requiring women to register with the Selective Service alongside men to make them eligible for military conscription would be to treat men and women interchangeably and to deny male and female differences clearly revealed in Nature and Christian Scripture. [Not at all. As pointed out earlier, there are many ways women could be required to register with the Selective Service that would not make any claim that females are interchangeable with males.]

The Testimony of Nature

The natural order, considered by plain reason, supports what the vast majority of civilized societies — ancient and modern — have recognized: men are better suited than women for warfare; thus, women are at a disadvantage against men in warfare. The inherent, distinct, physiological compositions of male and female point to differently-suited purposes that have implications in the realm of fighting. [Again, CBMW conflates “fighting” with the Selective Service and conscription. Requiring women to register with the Selective Service is not equivalent to requiring women to be combatants.] The average man is stronger and has a larger frame than the average woman, making him better equipped for aggression; the female body is naturally equipped to nurture the next generation, suiting the average woman better for care and not combat. [See comment immediately above.] Only a non-scientific [“Non-scientific” is weak.] assessment of male and female physiology overlooks these plain and natural differences.

Nature and plain reason also warn that a government that conscripts its female citizens in their reproductive prime is a government that fails to seek what is best for its future and the future of its citizens. A woman aged 18–25, the current range for military conscription, is in the midst of her prime reproductive years. Therefore, to conscript a generation of women — wives, mothers, and daughters — is to demographically doom the next. [Here, “doom” is overreach.] Drafting women into the military, where many could be involuntarily assigned combat roles, [Note this word “could.”] would set the nation up for demographic disaster as birth rates would be inevitably and drastically affected. [“Disaster,” “inevitably,” and “drastically” are overreach.]

Moreover, not only could a woman, unbeknownst to her, be with child when conscripted, she could also become pregnant during her time of service, which would put her and her unborn baby in the path of great harm — not to mention the necessary leave during pregnancy and postpartum that would require additional resources to train her replacement. [This is the worst part of this statement. They are intentionally remaining silent about just war criteria forbidding the unnecessary risking of life. Placing non-combatants in harm’s way is such a fundamental violation of historic just war principles that it renders the war itself immoral. To resort at the end to the discussion of training costs is to trivialize the crime of a nation normalizing the killing of babies in its warfare.]

Furthermore, should a woman become a prisoner of war, she could be subjected to rape and sexual abuse at the hands of enemy combatants that could lead to unwanted pregnancy. [Ending this sentence by raising the specter of “unwanted pregnancy” is an embarrassment.] Especially in light of our current cultural moment, we should be seeking to protect America’s daughters against such abuse, not making provision for it. [Risking an evil is not equivalent to making provision for that evil.] This great evil would be aided and abetted by a nation that places women involuntarily on the front lines of warfare. [The noteworthy thing here is that word “involuntarily.” CBMW wants to condemn woman combatants in the most strenuous terms while maintaining a strict policy of never saying “no” to women voluntarily fighting on our nation’s front lines.]

The Testimony of Christian Scripture

Christian Scripture affirms what is revealed in Nature [Not “teaches,” but “affirms,” thereby implying the relegation of special revelation to a status subordinate to general revelation.] and provides further significance and clarification to this revelation [Nature’s revelation, that is.]. Scripture teaches that Adam was created first and given familial and covenantal headship. [Here we have the fundamental equivocation CBMW never fails to promote concerning God’s Order of Creation of Adam first, then Eve. That order, they claim, is inapplicable outside the home (“familial”) and Church (“covenantal”). They oppose any significance of Adam’s headship outside the home and church, and yet, here in this statement, they want to attribute some significance to Adam’s headship outside the home and church. And thus the nonsensical nature of this paragraph and the document as a whole. Thus also their hamfisted attempts at the use of Natural Law. What CBMW’s top men have always said is that Scripture teaches Adam was created first, but his headship is limited to the home and the Church. In the final analysis, this has rendered CBMW a force, not for opposing, but for promoting sexual anarchy. The war that cedes one-third of previously held territory to the enemy from the very inception of hostilities is hard to pass off as a victory.] Eve was created second to be Adam’s complementary helpmeet, corresponding to his likeness and complementing his nature with differing sexual, physical, and psycho-social characteristics that form the basis for their complementary roles (Genesis 1:27; 2:18–24; 1Corinthians 11:2– 10; 1Timothy 2:12–13). [But remember, CBMW strictly limits the application of these “complementary roles” to the home and Church.] One divine purpose of the complementary differences between male and female is the fulfillment of the creation mandate, to be fruitful and multiply and fill the earth through the divine institution of the family (Genesis 1:28), which necessitates periods of vulnerability on the part of the woman and provision and protection on the part of the man while a woman is with child, both in utero and in the child’s infancy. [Well said.]

Male headship in the family and the covenant community is patterned after the creational arrangement and is rooted in the very nature of God’s original design before sin entered the world (1Corinthians 11:2–10; 1Timothy 2:12–13). [Again, what is noteworthy here is CBMW’s attempt to deny the meaning of the Creation Order anywhere outside of the home and Church, and hence their speaking here of “the family and covenant community” (Church).] The family, husband and wife in covenantal marriage and father and mother to their God-given offspring, is a pre-political institution that God-fearing nations must not subvert in law or custom. Conscripting wives, mothers, and daughters against their will [Again, CBMW’s men only oppose these things when they are “against (women’s) will.”] and away from their own families would constitute just such a subversion and disrupt this fundamental unit of society, without which there is no society.

It is not a properly ordered society that sends its daughters to combat; [What a precious way of circumnavigating any direct condemnation.] instead, Scripture indicates it is a sign of shame and disorder for a society to do so (Jeremiah 50:37; Nahum 3:13). When Deborah went out with Barak to battle — Scripture does not indicate she fought, but that she accompanied him to the battlefield — it was to his and Israel’s shame (Judges 4:9). Further, when Jael wielded the hammer and peg against Sisera, it was not as a soldier but as a citizen under invasion, and this to the shame of the men charged with Israel’s protection (Judges 4:17–22). Moreover, when God commands his people not to confuse the garments of men and women, forbidding men to wear women’s clothes and women men’s clothes in Deuteronomy 22:5, it is literally the garb of warfare that is forbidden to women. [Does anyone else wonder if CBMW’s men think this has application outside the home and Church; to civil society, for instance?]

The biological differences between male and female evident in both Nature and Christian Scripture [In other words, one religious sect’s holy book.] necessitate that men and women not be treated indistinctly and interchangeably. While we respect the decision of women who wish to engage in military service as volunteers, [CBMW’s men will, at all costs, avoid saying “no” to woman.] the Council on Biblical Manhood and Womanhood, represented by the undersigned, vehemently opposes every effort to force [“Force,” not “allow.”] women into military service by government coercion [“Coercion,” not “permission.”]. With the strongest conviction, [we can muster given the weakness of our fundamental commitments] the Council urges the National Commission on Military, National, and Public Service to reject any recommendation to require [“Require.” In the end, it’s not about God and His Creation of male and female, but merely the idiosyncratic views of a few who would beg to differ.] America’s daughters to register with the Selective Service to make them eligible for conscription.