The day our family went smash 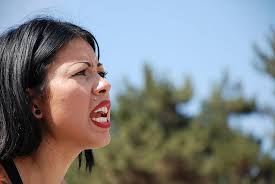 For rebellion is as the sin of divination,
And insubordination is as iniquity and idolatry. (1Samuel 15:23)

Once upon a time, there was a Christian father who had a wife he loved very much. God has blessed this father and his wife with ten children—seven girls and three boys. The oldest was a seventeen-year-old boy named Obedience and the youngest a little baby girl named Sarah.

The mother worked hard every day nursing her baby, cooking, doing laundry, driving the huge family van to the grocery store and church and homeschool co-op. She was happy to go to bed and get some rest each night and couldn’t wait until her little Sarah started to sleep through the night.

The father worked hard, too. He took care of the bananas at Walmart. Every day he carried out over 2,000 pounds of bananas and put them on the big banana display in the produce section. He put out other food and kept the produce section organized and clean, but he never stopped restocking the banana display. People bought lots and lots and lots of bananas. He was happy they liked bananas because this meant he’d always have a job paying him money to take home to feed his own wife and family.

The family went to church Sunday mornings and Wednesday nights. They had lots of friends at church. Most of the mothers and kids at their homeschool co-op went to church with them, so it was fun to get to see them so often.

Grandma and grandpa went to the church, also. It was nice to see them each Sunday morning. Their church had lots of kids and a playground and it was always a happy time to play outside after Sunday worship while their parents hung out and talked with the other kids’ moms and dads.

They were mostly a happy family. Having so many brothers and sisters made it easy to play blind-man’s bluff and soccer and baseball. Sometimes the neighbor kids would join them and that was really fun because then they could have two real teams without having to fill in with the little brothers and sisters who didn’t know what they were doing. Their house was tiny and their van was old and sort of dirty, but God loved them all and they didn’t fight much.

Then, one day, things fell apart.

Daddy was a deacon at church and one morning during breakfast he announced to the family that they wouldn’t be going to church for worship the next three Sundays. He’d gone to a meeting of the deacons and elders the night before where the elders had decided church wouldn’t meet for the next three Sundays because of a sickness that was spreading across the world. One of the elders was a doctor and he had told them this sickness was dangerous and people could catch it easily from one another, so they should stay home from church for a couple weeks to keep it from spreading.

The elders and pastors agreed and voted to have worship services online for the next few weeks. They said there were software programs they could use to continue to worship together although they wouldn’t be able to have communion alone in their homes. Communion was for the whole church and had to be given out by the officers, not their father and mother.

Everyone listened to Daddy explain this and you could tell it made everyone sad. Daddy was sad, but explained that the elders were responsible to protect them spiritually, so it made sense for the elders to protect them physically, also. Like I said: everyone was sad, but Daddy said it would all be over soon and it might be fun to be able to eat jelly on toast and drink orange juice while Pastor McGregor preached. But it would be weird watching and listening to him on a computer screen! And it would be weird singing the songs with their worship pastor, doing it through a computer screen. They wouldn’t be able to feel the real low notes on the organ through the computer’s tiny tinny speakers.

To the kids, Daddy’s announcement was sad, but it seemed like things would be fine. But then Mommy spoke and that’s when things fell apart. It was awful. She was angry at Daddy. She said Daddy didn’t know what he was talking about. She said the elders were stupid. She said it in front of all the kids—including the little children!

It was true. They had known Mommy often disagreed with Daddy and thought he was stupid. He didn’t bring home much money and they often heard her complain about how hard it was to keep food on the table when he just worked stocking food at Walmart. She was angry having to drive such an old van. She was angry Daddy didn’t make enough money to buy them a larger house. She wanted to be able to buy nice clothes for herself, but she had to wear blue jeans most of the time and the kids’ clothes came from kind families at church who passed their clothes on to them.

Mommy loved Daddy. Sometimes they would hear Mommy and Daddy laughing in their bedroom, and that made it a happy home. But Mommy was mostly unhappy with Daddy during the day. You could see it in her face when he got home after work. He’d go over to tell her he loved her and give her a kiss and pat her bottom and she’d move away from him and frown. It made them sad to see her treat Daddy this way.

But all that they had gotten used to. Now, though, Mommy was on the warpath.

She yelled at Daddy telling him the elders and pastors didn’t know what they were talking about. She said she’d been reading on the internet and all the homeschool moms who used the same curriculum they used were researching this sickness and said it wasn’t nearly as dangerous as the doctors said it was. She said keeping people away from each other was just what the government Child Protective Services wanted. They hated homeschool co-ops and all this talk about people spreading this sickness was not just going to stop the church getting together for worship, but it was going to stop them from getting together with the other co-op mothers and children, too.

Daddy tried to explain things to her. He said the sickness killed many people and staying home for a few weeks would slow it down and save people’s lives. He said the governor of their state had issued a law that kept any group larger than twenty-five people from meeting publicly. He said the elder who was a doctor had researched things and agreed with the governor.

Mommy got even more angry. She said the elder who was the doctor didn’t know what he was talking about. She had read all about the sickness on the internet and lots and lots of Christians were saying the government had no right to tell them not to worship together. She said the government couldn’t be trusted anyhow because of abortion. She asked Daddy why he would obey a government that killed babies?

Daddy tried to reason with her. He said killing babies was evil and God would punish the government for allowing it, but in this case, the government was doing what it should have been doing with the unborn babies: it was protecting life and they should submit to their governing leaders because God commanded them to in the Bible.

But Mommy had always known Daddy wasn’t smart and had trouble thinking on his own. That’s why he worked at Walmart stocking bananas, she said; he had no initiative.

Mommy started banging pots and pans and kicking the kitchen table legs when Daddy explained about how the elders were obeying proper government authority, just like the Bible said to do. Mommy was real angry and laughed at Daddy. This hurt Daddy. You could see it in his face. Mommy was angry and he was sad.

Daddy tried once more. He told Mommy that even if they didn’t submit to the government, they had to submit to the elders because the elders were in authority over them and they had taken vows to obey them when they became a part of the church.

Mommy answered him saying it wasn’t right to obey men who were wrong. Then she asked Daddy whether he would obey the elders if they told him she had to get an abortion the next time she got pregnant?

Mommy said, no, the elders were telling them to do wrong. The Bible commanded them not to forsake the assembling together of the saints for worship and that was the very opposite of what the elders were bossing them around, telling them to do. God commanded them to get together and worship him and she didn’t care what Daddy said. She would put the kids in the van next Sunday and find a church where the elders and pastors read the internet and knew what was really going on and were refusing to listen to the doctors and to obey the governor. She would take the kids to church and show her obedience to God, and she hoped her children would learn from her not to give blind obedience to anyone, but especially the government and church elders and pastors.

Daddy was very very sad and asked Mommy if she didn’t even think she should obey him? He was her husband and didn’t the Bible tell her to obey him?

Mommy laughed. Actually, it was more like a cackle, and she told Daddy that he was stupid and he should listen to her. “Mother knows best,” she said.

The next Sunday was the end of their family’s happiness. Mommy got dressed for church and herded all the children out into the van and drove away to church. On the way to church, she told the kids Daddy was “stupid” and “stubborn.” She told them the elders and pastors of their church were “stupid” too. She said the elder who was a doctor was on what she called a “power trip” and she hoped his wife was giving him a good piece of her mind. She said their state governor wasn’t willing to shut down the abortion mills and he had no “legitimacy.” Whatever that means.

When they got home from church, Daddy and their oldest brother Obedient and oldest sister Submissive were singing with their church musicians on the computer screen. It was the end of their church’s online worship. It was embarrassing how weak and tinny it sounded, but it was coming through a tiny computer screen and speakers, after all.

The words they were singing as Mommy and the rest us walked in the door were:

Talking with Pastors Max Curell and Jody Killingsworth yesterday, it was clear to us it might help people see their rebellion if another foot wore the shoe. Say, for instance, it was a wife telling her husband he was stupid and she knew more than he did, and he was wrong for obeying his elders and she wasn’t going allow him to keep her and her children from obeying God…

By the way, I’m happy to report that our own Trinity Reformed Church has provided none of the bad examples I’ve used above.