Memorial Presbyterian Church: the gay aesthetic at the foot of Mt. Sinai

Yesterday (March 5, 2020), we didn’t break the news of Memorial Presbyterian Church’s hosting of plays commending the LGBTQ+ sexual perversions. It had been broken twelve years earlier, back in 2008 when byFaith did a puff piece lauding Memorial for its gay-friendly building policies and sponsorships through their church’s “ministry” they had just named “The Chapel.” 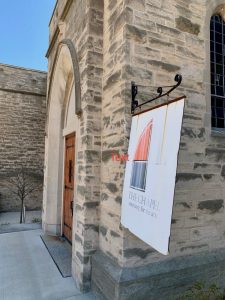 Entrance to “The Chapel.”

“The Chapel” is simply a smaller sanctuary attached to Memorial’s main one. Many rich churches have such chapels designed to be smaller venues where more intimate groups of families and friends can have their christenings, weddings, and funerals without sacrificing the beauty and dignity of the main sanctuary. Because Memorial’s membership and attendance had grown old and small during the aughts, there was little demand anymore from its members for the use of this intimate venue, so Memorial decided to repurpose their chapel to serve as a free venue for the artists in their neighborhood.

Thus it was that their chapel transitioned to “The Chapel” and began to host visual representations and dramatic celebrations of wickedness and sexual perversity, continuing to do so to this very day with plans for the same tomorrow.

Memorial has always been committed to refusing to make judgments about what they host in their building. Calling their chapel “The Chapel” is merely the fiction enabling them to distance themselves from any responsibility for the artistic evils and idolatry they host. And make no mistake: they host it. Memorial is attached to, and owns, the venue; they pay for it to be heated in the winter and cooled in the summer, they pay the electric bills, they take the money at the door for performances, they usher, and they provide attendees two free drinks.

What they don’t do (and claim to be highly principled in not doing) is notice—let alone judge or prohibit—sins unbelievers commit and celebrate in their building.

This is the meaning of in-the-city-for-the-city among PCA guys today. But then, who’s surprised? Greg Johnson says Tim Keller and his great admirer out in the Midwest, Jason Dorsey, were his inspirations when he pushed Memorial to repurpose their chapel over a decade ago, from worship of God to worship of artists.

That’s always the gay aesthetic, isn’t it? Replace holiness with good taste and turn artists into priests. Sort of like Aaron at the bottom of Mt. Sinai leading the sexual debauchery around his Baal he had crafted so tenderly from the precious metals and stones of the Egyptian jewelry the Israelites contributed to the venture. Their Chapel. 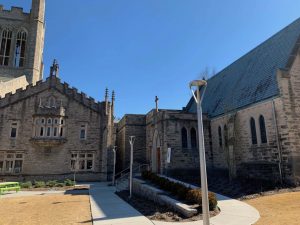 “The Chapel” joined to Memorial’s sanctuary.

Memorial, readers should remember, is the church that gave us Revoice. The church is pastored by a man who is shameless in his promotion of the gay identity and aesthetic.

What’s needed, though, is not one single word of discussion, let alone another 150 pages of meandering, nonsensical whitewash by Missouri presbyters concerned only about the outside of their cup. 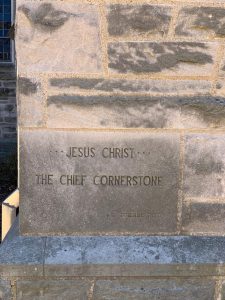 What’s needed is one man with even a small amount of zeal for God’s house who has in his possession one whip and the faith to use it. They’ve turned God’s House into a den of iniquity. Imagine how Amos or Jeremiah or John the Baptist or Jesus or Paul would respond.