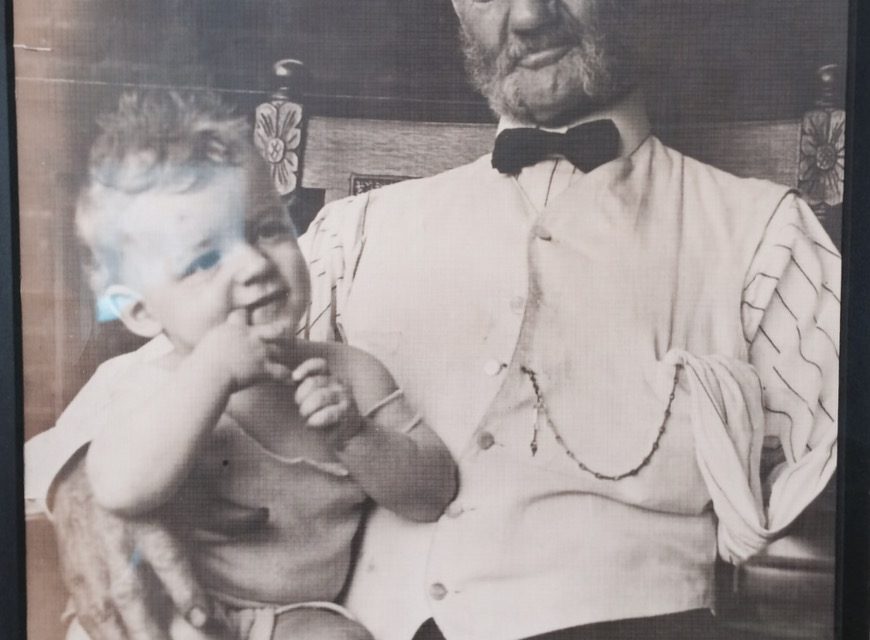 If you’re a follower on fb or twitter, you’ve noted an intermittent focus on Scripture’s doctrine of hair as a Divine differentiator between the sexes. More recently, I’ve been focussing on facial hair—specifically beards. It’s dawning on me (very slowly) that beards matter.

Beards have long mattered in the Bayly family. On our living room wall is this picture of my maternal great grandfather who lost an arm in the Civil War. He’s holding my Uncle Curtis. You can feel his dignity. You can see his beard.

On my father’s side, the Baylys lived in and around Gettysburg and were caught up in the battle and its aftermath. Dad’s grandmother was a little girl at the time. Following his Gettysburg Address, she shook President Lincoln’s hand. By then Lincoln was wearing a beard he had grown in response to epistolary advice he’d received from eleven-year-old Grace Bedell:

I have got 4 brother’s [sic] and part of them will vote for you any way and if you will let your whiskers grow I will try and get the rest of them to vote for you. [Y]ou would look a great deal better for your face is so thin. All the ladies like whiskers and they would tease their husband’s to vote for you and then you would be President.1

It wasn’t a wild or wooly beard. It was trimmed and Dad kept his hair cut short. His beard was as urbane as every other part of his appearance and clothing. Like Mud’s grandfather, Dad looked distinguished, yet enough people complained about his beard that he wrote of it in his monthly “Out of my mind” column in Eternity magazine back in January of 1970:

You know, I’d never in a hundred years go up to a lady and say, “Why do you wear your hair that way? It looks lousy.” But women, some of whom I’ve hardly met, feel free to comment negatively on my facial hair. One Christian woman, after I had answered her questions (a real inquisition), and assured her that yes, my wife does like my face this way, turned to her husband with a drill-sergeant’s look and said, “You grow a beard and I get a divorce.”

It’s the quiet, feminine woman who’s likely to say, “I like your beard.”

And one lady, on her way out of Sunday school, commented, “A beard is like a picnic. It’s more fun when you have to go through the underbrush to get there.”

Many men are quiet advocates. “I wish I could grow one” is fairly often expressed. By this the speaker means either “I can’t even grow sideburns,” or “My wife/boss/church wouldn’t stand for it.”

Mary Lou handed me the December issue of Woman’s Day: “Read what Ruth Bell Graham says about beards,” she said. And I read from an interview.

“‘I’ve learned that the students with beards are usually more interesting. I may not agree with them, but I’m always stimulated. They’re original and they have the courage to be different.’ Ruth reflected a moment before going on. ‘Beards are really very masculine and I’m all for that. I think it takes a mature man to grow one and a mature woman to appreciate it. I’d even like Bill to grow a beard!’”

Most of our lives, Dad’s three sons (one of whom is now gone) were largely clean shaven although two of us had mustaches off and on. Starting back in 1996 though, I grew a beard and have had something in between stubble and a trimmed beard ever since. It was grown as a private act of repentance and faith following several difficult years, but no one knew that. (Including my wife until yesterday when I first broached the subject with her.)

Over the past twenty-five years of Trinity Reformed Church, pesky outsiders have sent me notes or emails mocking our church’s Biblical commitments, ending with the question, “Do you require the men of your church to wear beards?” One of those inquiries came this past year, but the question has been asked other times back through the past two decades.

It’s seemed stupid to me—the question, that is. We’ve always had lots of men without beards and neither of my sons have worn beards. But there you have it. Mockers mock and apparently beards set them off. Which should have been a clue to me, but it wasn’t.

Not until a few years ago did I begin to think about beards in anything other than a superficial way, and it’s interesting how it happened.

When the playoffs come, I watch some NBA and several years ago I noticed NBA men like Lebron James and James Hardin had large beards. So I began to think about it.

Sexual identity is no indifferent matter among African American men. They have blazed many cultural trails including men abandoning fatherhood (which the rest of us then copied). They have also blazed the trail of other sexual rebellions, especially feminized churches, families, and childhoods. For many decades, now, sexuality has been a train wreck in the African American community, so I took note of James and Hardin’s beards and cogitated on them.

Would this become a thing?

By now we all know the answer is “yes.” The style among African American men today is hirsute. Watch the back of the helmets in the NFL. The other day I saw a defensive tackle grab at the dreads of a running back, trying to tackle him. He missed. The dreads, and thus the tackle. I wondered why this doesn’t happen more often? Maybe there’s a rule against hair-collar tackles?

This thing includes hipsters. Some people think the effeminacy characteristic among hipsters should cause those of us working for a renaissance of manhood to condemn them, but why?

At this late date in our feminized and emasculated culture, isn’t manhood aspirational for all of us? Why should any Christian man look down on the beard of any man, stubbled or trimmed, bushy or lambchoppy?

To help my thinking, I’ve been reading Of Beards and Men: The Revealing History of Facial Hair by Christopher Oldstone-Moore, a bearded prof specializing in sexuality and gender studies. His work published by University of Chicago Press has garnered quite a bit of attention, and for good reason. It’s fascinating. Get a copy and read it.

On the second page of his history of facial hair, Oldstone-Moore declares the opposite of what all effeminate Christians believe about their appearance:

One thing is certain: changes in facial hair are never simply a matter of fashion.

Whenever masculinity is redefined, facial hairstyles change to suit… [F]acial hair is political [and] any symbol of masculinity carries political and moral significance.

[T]he first principle of beard history: the face is an index of variations in manliness.2

Before concluding this first in an anticipated series, may I remind us Scripture has a couple things to say about hair. For the record:

You shall not round off the side-growth of your heads nor harm the edges of your beard. -Leviticus 19:27

All the days of his vow of separation no razor shall pass over his head. He shall be holy until the days are fulfilled for which he separated himself to the LORD; he shall let the locks of hair on his head grow long. -Numbers 6:5

When I heard about this matter, I tore my garment and my robe, and pulled some of the hair from my head and my beard, and sat down appalled. -Ezra 9:3

I gave My back to those who strike Me,
And My cheeks to those who pluck out the beard;
I did not cover My face from humiliation and spitting. -Isaiah 50:6

Cut off your hair and cast it away,
And take up a lamentation on the bare heights;
For the LORD has rejected and forsaken
The generation of His wrath. -Jeremiah 7:29

For every head is bald and every beard cut short; there are gashes on all the hands and sackcloth on the loins. -Jeremiah 48:37

“Their camels will become plunder,
And their many cattle for booty,
And I will scatter to all the winds those who cut the corners of their hair;
And I will bring their disaster from every side,” declares the LORD. -Jeremiah 49:32

Indeed, the very hairs of your head are all numbered. Do not fear; you are more valuable than many sparrows. -Luke 12:7