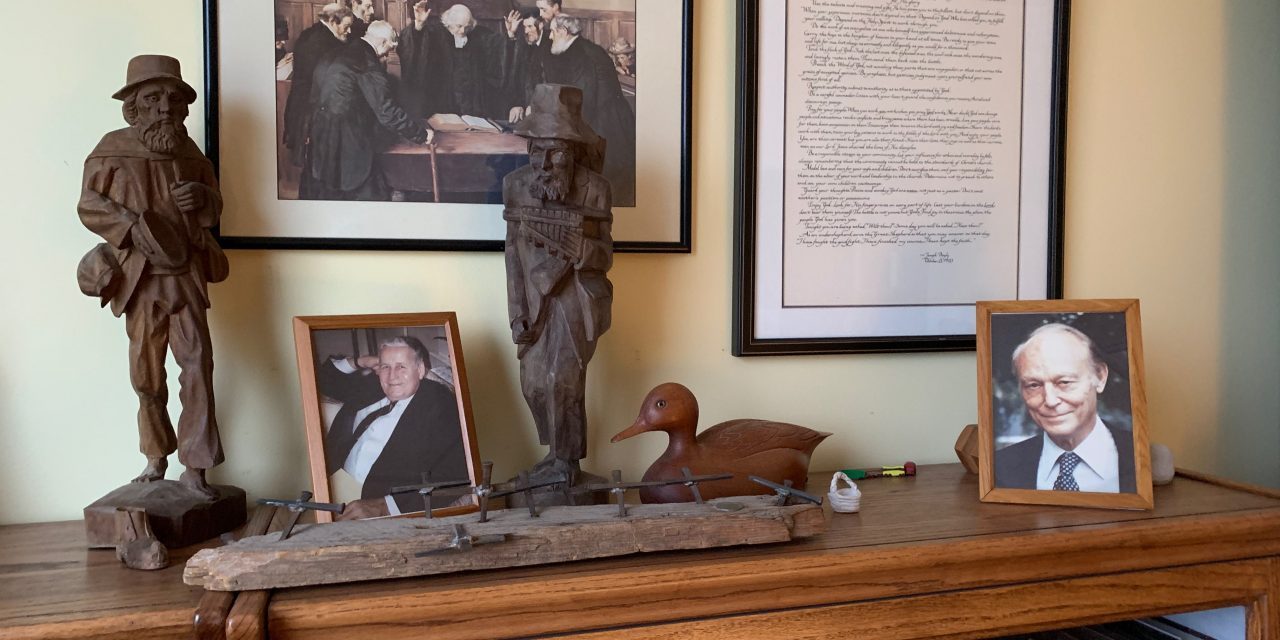 This past week, I spent a good bit of time reading things Dad wrote during his life. Later in the day, I commented to Mary Lee, “We are our fathers.” I’m glad Dad wrote to teach us because I can go back over what he wrote and recognize again and again where my convictions and even turns of phrase came from. Reading back through his pieces is close to a visit and it left me wishing he were here.

God called Dad home back in 1986 during his sixty-sixth year. Today marks the first day of my sixty-sixth year of life given by our Father. We’ve lived thirty-three years without him, now.

It was hard for Mud to live without Dad. She felt naked without him and that’s pretty much the life of every widow who had a happy marriage. Yes, Dad and Mud had some rough years. Maybe even a rough decade or so after Joe Jr.’s death, but spring and summer followed the winter of tension in mourning. They loved God and one another when it wasn’t easy. Whiners they were not. Bitter not in the least. Never ever complained. Never in the smallest way saw themselves or presented themselves to others as any sort of victims. They did the work of grieving and it took over a decade to get over the worst of it.

When Dad died, Mud had to start over again and she wasn’t happy for quite a while. When Dad died, she exclaimed, “Oh Lord, not another one!” For several years it was too difficult to go to church without him, so she stayed home. We disapproved, but she didn’t seem to care. Now we understand more.

A few months before Dad’s death, God gave me a dream-vision of his coming death. It was terribly sad. I woke up beside myself with grief and Mary Lee comforted me as best she could. So a couple months later when Dad went into surgery very early in the morning, as I kissed him goodbye and told him I loved him “more than you will ever know,” I knew it was the end of his comfort and friendship in my life. I’m so thankful for the kind preparation my Heavenly Father had given me for that almost-unbearable pain.

In Rochester, the night after Dad died, the guest house we were staying in must have been quite close to the helipad for Mayo because all night the low woof-woof of the rotors shook our sleep. It reminded me of a Viet Nam death zone. It was the perfect complement to our grief there with Mud, Mary Lee, and our little baby Michal.

Death is the end of any relationship. Intimacy is over; memories must serve.

There is never any death without guilt and regrets. Take heed. Always say your goodbyes realizing this could be the final one. Share in the Easter and Thanksgiving and Christmas family reunions aware that what you don’t say now might well never be said. Speak well. Speak truthfully. Speak in love.

Say what needs to be said. Not over and over again like a sound loop, but at least once or twice. The mark of Christ-like love is calls to repentance and faith. And since we are not sinless, apologies. Asking forgiveness should be the currency of family reunions.

But always truth. Always truth. Truth that you will certainly wish you had said after your father, mother, brother, sister, son, daughter, husband, or wife dies. Speak now or forever hold your peace.

A couple months before he died, Dad took me aside and said, “I think your mother will be well provided for after I’m gone.” He also gave me a slip of paper he’d written instructions on telling me what to do about his Social Security. Maybe he too knew he was going to die? Whether or not, we didn’t talk about it.

Dad tried to have open heart surgery up at Mayo without any of his family with him. We’d just gotten home from a week at the shore in Cape May, our longtime family vacation spot. A week or two later, Dad went to Mayo for his annual physical and they decided his heart needed several bypasses along with a valve replacement. Mud called and said she was uncomfortable not being with him, although that was as he wished.

Mary Lee and I told her to go up to him right away, which she did. Then we climbed in the car with our infant daughter, Michal, and met Mud there. The evening before we left for Rochester, I went out into Neef woods and picked a half-gallon or so of wild black raspberries. We arrived at Mayo the next day and Dad ate those Neef raspberries as his last meal. They were his favorite.

How do I miss Dad?

Every day in multiple ways. I think about him each morning showering with fragrant soap. Dad’s favorite things smelled good—food, after shave, soap. Each Christmas Dad would stuff our stockings with a bar or two of goat’s milk soap from Crabtree and Evelyn.

Each time I see our grandchildren (which pretty much means constantly) I think of what delight Dad would take in them. He’d be so very proud. His chest would explode.

When I watch the battles over homosexuality in the church today, I remember how depressed he was over it way back in the early eighties. He wrote and wrote warnings against the sodomite movement infiltrating the church waaay back then. He prophesied against it. He tried to shame the Christian leaders and institutions that were promoting a softer, gentler approach.

Once he told me that he’d asked the fifteen or so men in his men’s Bible study (at Tenth Presbyterian Church back in the fifties or sixties when we lived in Philly) how many of them had been molested by an older man during their childhood? He said it was more than half of them and most had been abused by their choir director.

Dad hated sodomy. Dad hammered against the movement which has reached fruition today through the influence of unfaithful men like Russ Moore and Al Mohler.

At this point in my life, realizing how destructive such celebrities are to the work of the Kingdom of God and His Church, I try to cultivate ignorance of what they are saying and doing. But sometimes, you can’t help it. Even if you manage not to have to listen to them directly, it’s almost impossible not to hear about them.

Then I’m reminded of both Dad (Ken) Taylor and Dad Bayly. The world today is not worthy of them. They were famous like the dudes everyone today thinks are important, but they were humble. Their fame was despite themselves.

When Jim Dobson built his splendiferous, stupendous, gargantuan new headquarters in Colorado Springs, Dad Taylor told me Jim had asked him to come out and pray and give the benediction for the building’s dedication. He said he’d declined, but Jim wouldn’t take “no” for an answer, so “I have to go.” Near the end of his life, Dad Taylor was interviewed by the Wheaton college magazine. As the interview came to a conclusion, they asked him what he was most proud of in his life?

Dad responded, “Some people tell me I’m humble, and that makes me proud.”

Dad Taylor gave away all his money. Sure, his children and grandchildren got some from him, and we’re very grateful. But what gifts we received from him were nothing compared to all the money he gave away year after year, decade after decade. Now his company continues to give away their profits as his children and children’s children follow in his (and Mom Taylor’s) footsteps.

Dad never chose speaking engagements based upon size. A million miler with United and out speaking over half the time at conferences and conventions, never once did he ask the size of the group he would be speaking to nor what sort of accommodations he would be provided. He didn’t fly first class and he didn’t require any honorarium. Even John Piper can’t measure up to Dad Bayly or Dad Taylor in such regards.

Who among our Christian celebrities demonstrate the fear of God?

The last decade or so of his life, Dad was wont to warn me against Evangelical pastors and parachurch leaders by saying, “Tim, every man is out to build his own kingdom. Every man—including Jim Dobson.” Why the only man he named was Jim is beyond me. It may have been because of the respect I had for Jim in his battles against pornograph and abortion, but who knows?

And readers wouldn’t know it but there wasn’t a hint of jealousy or envy in Dad when he gave this warning. People bought his books. People read his articles. People had him out on the road speaking the majority of the time. The difference between him and the munchkins today is the munchkins today are impressed by themselves whereas Dad Taylor and Dad Bayly were not impressed by themselves, at all.

As Dad neared the end of his life, it was not uncommon for him to exclaim in the middle of some conversation or other, “When the Son of Man returns, will He find faith on the earth?”1

It wasn’t a cynical or faithless statement. Dad wasn’t depressed. He was a realist and he allowed himself to see things as they really were, in all their filth and hypocrisy.

In fact, to his family this exclamation Dad would make was proof to us of his faith. Not in us or himself, but in the Son of Man Who will soon return.

When I was a senior in high school, Dad took the piece of driftwood you see in the picture above, soldering a bunch of horseshoe nails into eleven crosses and hammering them into the wood with one cross upside down and an old silver coin glued to the wood in the middle of the crosses.

On the back, he took a soldering iron and burned these words:

Dad Bayly is on the left and Dad Taylor on the right. Maybe, good reader, these few short reminiscences will allow you to miss my Dad, too?

When the Son of Man returns, may He find faith on the earth.