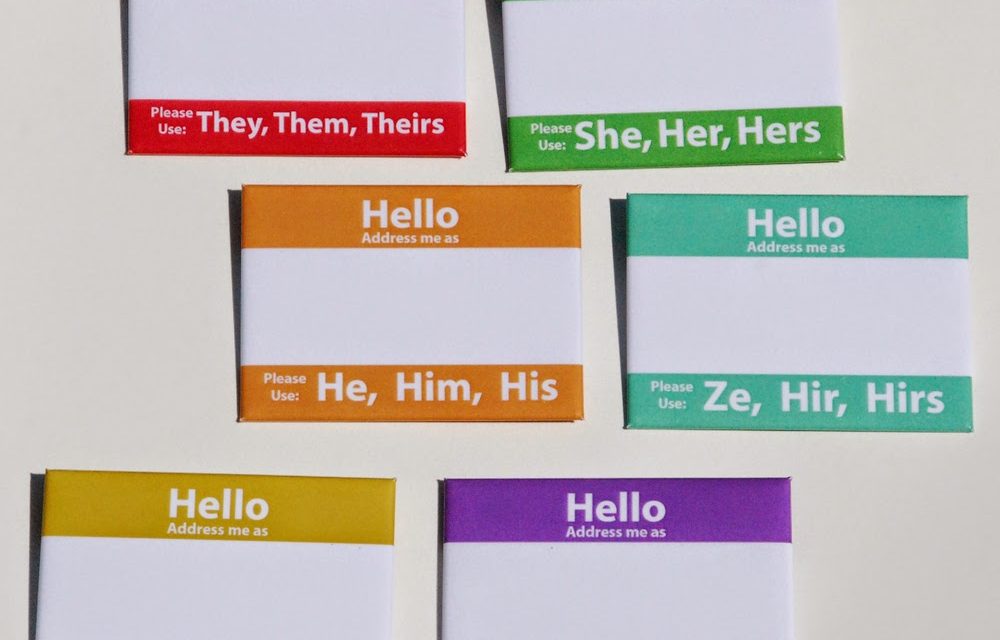 Last week I got an email reminding me the next step in language decadence is the inclusion of pronoun preference in email signatures. The email came from someone over at the university who added his pronoun preferences after his name thusly: “Tim Bayly (he, him, his).”

This cloying eager-to-pleasingness has been going on for a number of years now as insecure souls search for another place to declare each man’s personal choice reigns supreme—particularly the choice to repudiate one’s sex determined by the God Who made us.

They answer, “No, it is not He Who has made us! We have made ourselves and our bodies are certainly not ourselves. Forget my chromosomes. Forget my stupid hormones. I’m what I say I am!” Then they sign themselves; “Tim Bayly (she, her, hers)” or “Tim Bayly (they, them, theirs)” or “Tymn Bayly (ze, hirs).”

Make no mistake. This pronoun business is a very Big deal and you may get fired for failing to tip your hat to the revolution. Be on guard.

An historical note, followed by a suggestion.

This stuff is really old. Forty years ago, Dad wrote one of his monthly “Out of my mind” columns in response to shrill feminists’ attacks on male inclusive pronouns. He pointed out it had been proper usage for centuries to employ “they” as a gender-neutral singular, and if angry women didn’t like “he,” we could all change to “they” without committing any grammatical faux pas. This past week Apple News ran a headline for an article making the same point.

Back in the eighties at a retreat of John Knox Presbytery of the Presbyterian Church (USA), a young pastor made the huge mistake of using a male inclusive pronoun. He got his comeuppance. The female pastors rose to their feet and stomped him good. Feeling bad for the guy, when it was my turn to speak I said something like, “Given our extreme sensitivity and not wanting to make a mistake, instead of ‘he’ or ‘she,’ I’ll be saying ‘it’.” Of course I smiled as I said it.

It’s become next to impossible to figure out someone’s sex from their name or the way it’s spelled. Simple fact: twenty years ago, people were messing around with naming their daughters while continuing to give their sons masculine, Biblical names. That’s going away now, so it’s becoming ever more difficult to figure out who God made him—male or female?

So actually, I’m in favor of the movement toward identifying one’s sex by placing pronouns within parentheses after our names in our email signatures. They will do it as an act of rebellion. We who believe will do it as our confession of faith.

It works as well for women: