In Adam all die: the Scripture that feminists defy 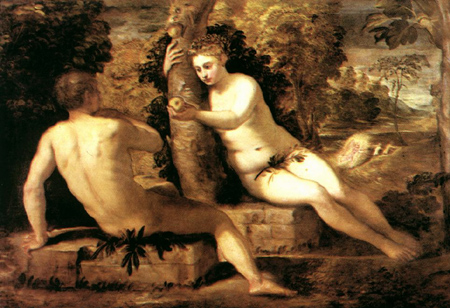 I do not allow a woman to teach or exercise authority over a man, for Adam was created first, then Eve. (1Timothy 2:12)

With this simple statement Paul declares again what is affirmed throughout God’s Word: the order of creation established male leadership as God’s command for all mankind. Addressing the matter of propriety in the prayers of public worship, the Apostle Paul reiterates this order:

For man does not originate from woman, but woman from man; for indeed man was not created for the woman’s sake, but woman for the man’s sake. (1Corinthians 11:8-9)

Imagine a new believer thoroughly confused by today’s sexual anarchy discovering the truth declared in passages such as 1Corinthians 11:3-16, 14:34-35, Ephesians 5:22-33, 1Timothy 2:9-15, and 1Peter 3:1-7. What a deep sense of relief to discover that Adam being created first establishes such a clear order between men and women!

So we see that Eve’s creation after Adam—Eve being created the second sex—establishes the Divine order of the two sexes. Still, Genesis goes on to reveal something else about Adam and Eve. Like God’s creation of Eve second, after Adam, the significance of this additional truth concerning sexuality is revealed more fully as it is reiterated in the New Testament.

The first revelation of this additional truth comes after the Fall when God is walking in the Garden of Eden in the cool of the day and inquires of the first man, Adam, “Where are you?” (In Hebrew, “you” is singular.)

Adam responds, explaining he and Eve found themselves naked and hid.

Right there it is notable that God directs His follow-up question, again, to Adam alone: “Who told you that you were naked? Have you eaten from the tree of which I commanded you not to eat?” (Genesis 3:11). 1

This is the foundational Biblical truth soft feminists styling themselves “complementarians” obfuscate: Adam was the second sinner, yet it was Adam alone God held accountable because He made Adam head of the race.

Thus it is that Adam alone caused the Fall.

Considering her leading role in the matter, this might seem patronizing of Eve.

So note well what Scripture declares about the reason for the Fall and the reason God addressed Adam, alone, following the Fall. It is because of the sin of Adam—not Eve—that the race of Adam remains under the curse of judgement and death down to this present day.

Therefore, just as through one man sin entered into the world, and death through sin, and so death spread to all men, because all sinned—for until the Law sin was in the world, but sin is not imputed when there is no law. Nevertheless death reigned from Adam until Moses, even over those who had not sinned in the likeness of the offense of Adam, who is a type of Him who was to come. (Romans 5:12-14).

Some years back, my father noted that, despite efforts to neuter the language of the Christian Faith (and Scriptures), he had yet to hear anyone propose the Church become a “he,” or Satan a “she.” Similarly, it seems ironic that feminists do not object to the essential inequality between the sexes revealed by this portion of the Biblical account of the Fall. Shouldn’t Eve be recognized as the leader in the Garden? Shouldn’t Eve have been penalized more severely since she took the lead in the sin there in the Garden? Aren’t we misogynists when we attribute the cosmic penalties of the Fall to Adam’s account? Don’t men always think themselves the only important ones? Wasn’t the Bible written by men—really, really ancient men?

Perhaps feminists fail to argue the issue because they rather like the clear meaning of God’s Word. There’s no question the Bible is clear on this issue. The New England Primer states it bluntly:

In Adam’s fall
We sinned all.

God’s Word makes clear that, because God made Eve for Adam and placed her under his authority, it was Adam alone God called to account for the Fall. Adam was the federal head, the representative, of his marriage, home, and race.

This is not to say Eve escaped accountability for her own sin. In Genesis 3 we read God also placed her and her female descendants under a curse that throughout all time has brought suffering to every woman in the throes of childbirth. So too, the serpent and his descendents suffer under God’s judgment.

Through Adam alone death came to all men, and it is because of Adam’s sin all creation groans, awaiting its release from the corruption of the Fall (Romans 8:22,23).

Finally, note that it is in Adam we all die:

For since by a man came death, by a man also came the resurrection of the dead. For as in Adam all die, so also in Christ all will be made alive. (1Corinthians 15:21-22).

One might think Adam’s fatherhood over us all is neglected in the Church today because it reinforces patriarchy. I think it more likely that, in our preaching and teaching, we neglect Adam’s federal headship because individualistic autonomy is written deep in the hearts of modern man.

Consider, for instance, how long it has been since this Biblical doctrine of Adam’s federal headship has appeared in services of infant baptism (or dedication):

O merciful God, grant that the old Adam in this Child may be so buried, that the new man may be raised up in him.4

Federal headship is a doctrine modern man finds hard to swallow. As a result, the significance of Father Adam to his human progeny is slipping away in the Church as in the world. This has left the imputation of Adam’s sin to all mankind just one more antique notion rooted in the culture of the Biblical writers that begs for revision by today’s dynamic equivocators.

For centuries Americans have been enamored of the legend of the autonomous loner. It’s a cultural ideal we’ve propagated worldwide. Consider loner movie stars such as Bruce Willis, Clint Eastwood, John Wayne, or Humphrey Bogart. Look back on the character development of the novels of Ernest Hemingway. In each case, individualistic autonomy serves as an excellent interpretive grid for American popular culture.

It remains true that the false ideal of the autonomous loner and the Biblical doctrine of federal headship are worlds apart.

Now then, what’s the harm?

The neglect of the doctrine of Adam’s federal headship over all mankind brings harm in three ways.

First, we hide one of the principal supports for the patriarchal ordering of the race of Adam which God has written on the hearts of all men. Second, as the federal headship of Adam becomes an obscure doctrine rarely mentioned, the corporate nature of God’s ordering of human society which God’s Word reveals also is obscured. Third, as the Church out of a mistaken sense of what is and is not fair backs away from the imputation of Adam’s sin to all men, it must also inevitably back away from the similar imputation of the righteousness of Jesus Christ to His elect.

Feminism is not taking aim merely at the practice of assigning leadership roles by sex; it also is attacking the corporate solidarity of marriage and family life. Consider, for instance, the misery endured by Abigail while she was married to Nabal as well as the suffering of Jephthah’s daughter; 5 Think also of the shame endured on August 17, 1998 by President Clinton’s wife, Hillary, and daughter, Chelsea, when the head of their home went on international television to confess he had committed adultery in the Oval Office. Why should the destinies of wives and children be tied to such men? Who would have had any trouble understanding if Chelsea Clinton had gone back to Stanford and joined the local chapter of the National Organization of Women and signed up to be an escort at the local Planned Parenthood abortuary?

Feminism, then, is bound up with a revolt against these twin pillars of the Biblical account of creation: federal headship and the corporate nature of human society. Both egalitarianism and the autonomous individualism at the heart of feminism are at war with the Biblical history and doctrine of Adam.

Likely feminists have not fully recognized it, but any attempt to alter these truths of Adam’s headship over the race of adam involves a parallel destruction of the salvation brought by our blessed Savior.

Today those called to preach and teach God’s Word must resurrect all the doctrines connected with our father Adam. Not just the doctrine of essential patriarchy, but more importantly the doctrine of federal headship.

God named our race “adam.” This name reinforces what the account of the creation of Adam and Eve reveals: the first woman was made after and for the first man so that, for all time, this structure is to be mirrored in the race of adam (man) by our living together under patriarchy—not matriarchy and not egalitarianism.

Further, this name “adam” God gave our race also makes clear that every woman or man ever to live has been born under the curse of a God-decreed solidarity with the First Adam, our federal head. Finally, and most importantly, it is only those who come under the Head of the Second Adam who will be saved.

The principle of solidarity is embedded in the Scripture and is exemplified in numerous ways. It is not necessary to enumerate the instances in which the principle comes to expression. It is a patent fact that in God’s government of men there are institutions of the family, of the state, and of the church in which solidaric or corporate relationships obtain and are operative. This is simply to say that God’s relations to men and the relations of men to one another are not exclusively individualistic; God deals with men in terms of these corporate relationships and men must reckon with their corporate relations and responsibilities.7

We may very well wish to deny our solidarity with the First Adam, but it is fruitless and futile. In Adam we all died, having been one with him in his rebellion in the Garden.

Yet from the riches of His mercy, God also calls us to solidarity with the Second Adam through Whom we may have imputed to us by faith a perfect righteousness which is effective “far as the curse is found.”

(NOTE: Most of this piece was originally published back in the late nineties.)