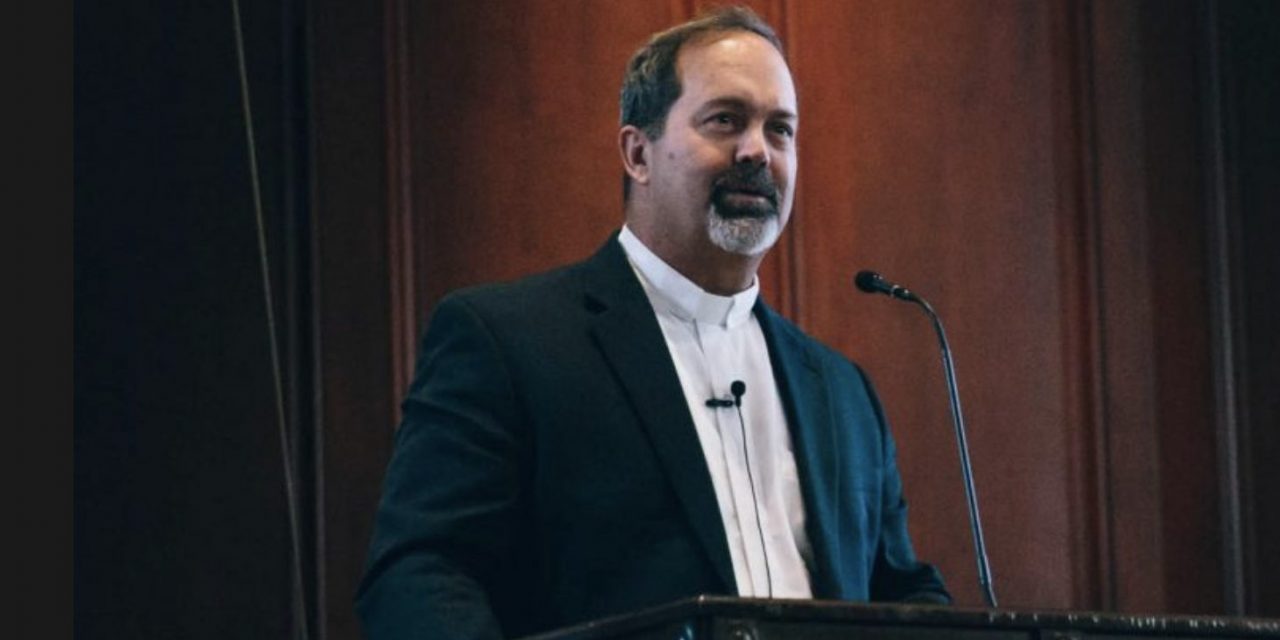 In response to Toby Sumpter’s recent mea culpa, Rev. Jeff Meyers took issue with our observation (linked in Toby’s blog post) that five of the eight men he appointed to the Missouri Presbytery Committee tasked with investigating Greg Johnson and Memorial Presbyterian Church had an easily documented sympathy for the 2018 Revoice project. Toby wrote,

Finally, it came to my attention that the recent Missouri Presbytery study committee on Revoice was appointed by Jeff Meyers, the moderator of the presbytery at that time (he is no longer moderator). The make-up of the committee included a strong representation of those already committed to Revoice and similar projects.

If your new eyes cannot see the plays being run on the church, your new eyes need newer eyes. If these new eyes have become instrumental in welcoming and normalizing homosexual identity in the church, even if completely unintentionally, those eyes need glasses. It’s no excuse to say that you didn’t see the ditch, the potholes, the bridge out over the river. The shepherds of the flock must have good eyes for guarding the flock otherwise they really are the blind leading the blind.

Toby posted a link of his blog post on Facebook, and Meyers was immediately incredulous and defensive. Here’s the exchange: 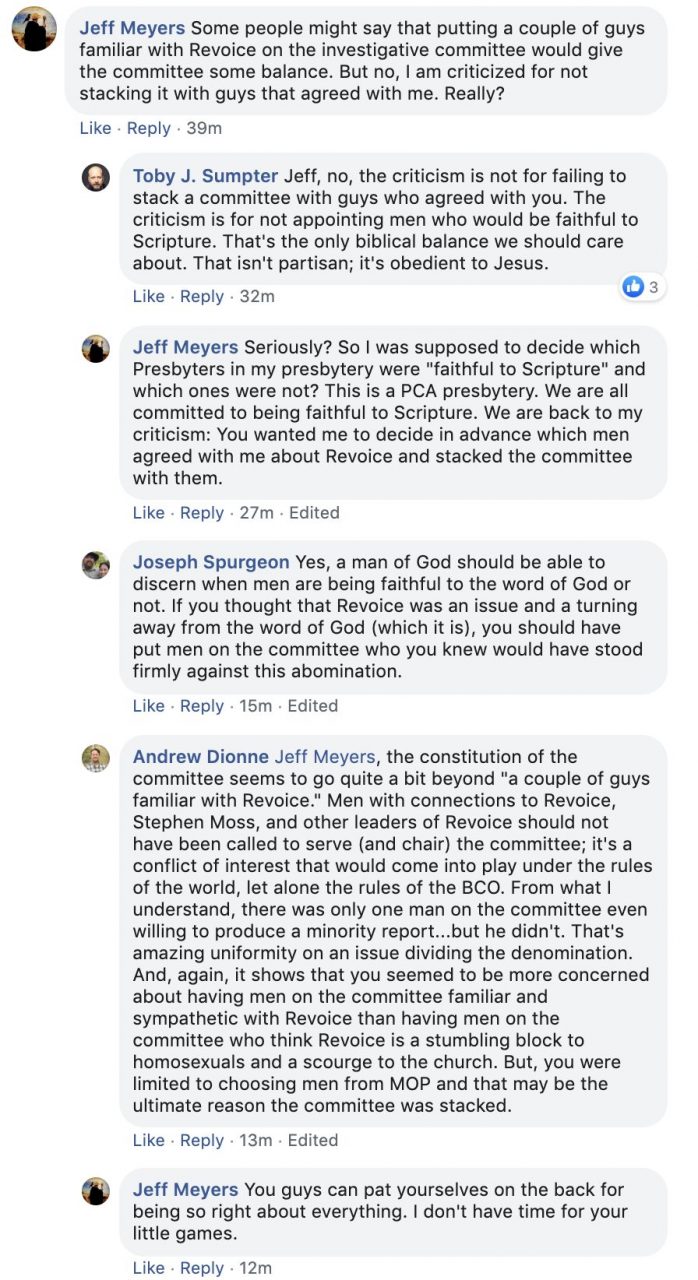 The next day, an article critical of the Gay Christian movement popped up on Meyers’ Theopolis Institute website. Toby shared the article with this comment: “Don’t know if my post yesterday had anything to do with the timing of these posts at Theopolis, and I may have a quibble here or there, but let the record show that I am grateful for this post from Jonathan Barlow and yesterday’s post from Peter Leithart.” Finding time to enter back in to the “little game,” Meyers said the following. Pay close attention to his second comment: 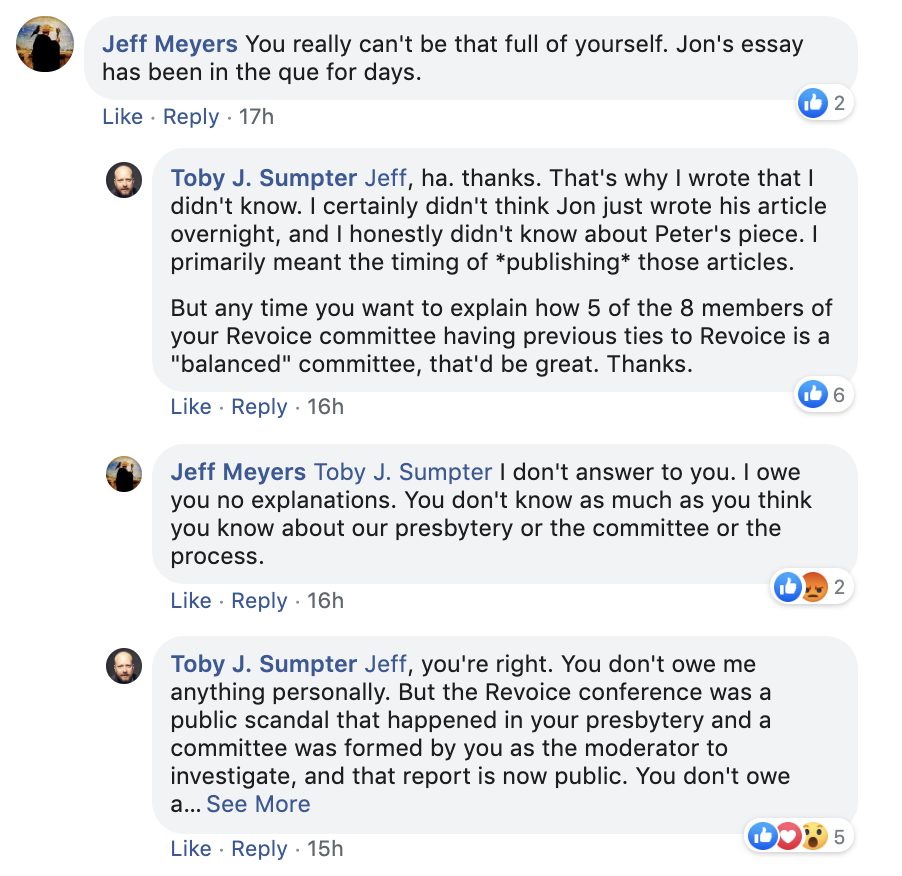 Taken together, the two comments above show Jeff Meyer’s defensiveness concerning his role in stacking the Missouri Presbytery Committee. The condescending attitude Meyers demonstrates in his unwillingness to explain his appointments or even acknowledge that other men may have a working knowledge of presbyterian courts and committee procedures is common among PCA company-men. Dalbey has been defensive from the get go. Greg Johnson thinks it’s just a matter of time before the PCA courts go full side-B. And now Jeff Meyers tells us that he owes no explanation for the way he stacked the Missouri Presbytery committee.

This unwillingness to explain one’s actions stems either from a fear of one’s ulterior motives being revealed or a simple misunderstanding of a pastor’s role in the broader church. Strangely, Jeff Meyers has been a fish out of water when it comes to the PCA what with his vestments, covenant renewal worship, paedo-communion, and federal vision theology. Why now this defense of Missouri Presbytery and his assertion that it was not his role as the Moderator to determine who was or was not faithful to Scripture (notice Meyers’ use of the scare quotes around that phrase)? Might it be because Meyers himself was tried and deemed faithful to Scripture by the same Missouri Presbytery men? Having been put through the wringer and overwhelmingly exonerated by these men, one possibility now is that Meyers was personally predisposed not to allow his moderatorship to get in the way of the will of the presbytery. It has been starkly evident the will of Missouri Presbytery is to legitimize the celibate gay Christian movement as evidenced by their ordination of Greg Johnson, Covenant Theological Seminary’s involvement in Revoice, and the recent report of Missouri Presbytery exonerating Memorial Presbyterian Church, the host of Revoice pastored by Johnson.

Consider carefully Meyers’s claim that he owes no one an explanation—and certainly not those beyond his own happy tribe. His bluster is both foolish and false. Perhaps Meyers doesn’t believe that churches outside the PCA are branches of the visible church, but that view would go against everything he’s ever said about the efficacy of the sacrament of baptism or the hoped for rapprochement between Reformed and Roman (which his Theopolis Institute colleague Peter Leithart advocates). Now, when it serves him well, Meyers goes fully tribal.

Has Pastor Meyers forgotten the directives of his own Book of Church Order for the office of elder:

[Elders] must exercise government and discipline, and take oversight not only of the spiritual interests of the particular church, but also the Church generally when called thereunto (8-3).

Meyers has yoked himself to the Theopolis Institute whose mission statement includes this sentence:

We offer a vision that we believe can and should shape the churches of the future – a thoroughly sacramental and Trinitarian theology and church practice, solidly rooted in Scripture, combined with unreserved catholicity that draws from all traditions of the church (emphasis ours).

Yet when asked to give an explanation to men in other branches of the visible church concerning his choice of the members of the Missouri Presbytery committee to investigate Memorial and Greg Johnson, he slams the door in their face denying any obligation to anybody outside his own denomination, the Presbyterian Church in America.

Bad look, Pastor Meyers. Readers in Reformed communions would do well to warn their flocks by spreading the content of the posts above as an explanation of the provincial mentality of the PCA. Men like Meyers obstruct the purity, unity, and peace of the Reformed Protestant confessional church. Remember this as they continue to preen themselves in front of one another.

The Church is God’s Household, the pillar and foundation of the Truth.