There could hardly be a better pastor to speak for all the other homosexual pastors, elders, deacons, and members of the PCA summing up yesterday’s actions at the PCA’s 2019 General Assembly than Revoice Pastor Greg Johnson who just tweeted: 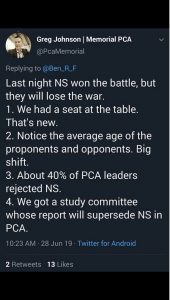 For clarity, “NS” stands for the tepid Nashville Statement which abandoned male headship in exchange for trying to hold the line on homosexual intercourse and marriage. To Pastor Johnson, the Nashville Statement’s victory being commended by the assembly will be short-lived since:

The awkward thing is I agree with Pastor Greg Johnson’s read of the assembly. He and his fellow LGBTQers have won. In the PCA, the aggressive victimhood and shamelessness of gays and lesbians and their enablers is here to stay.

This is my second rodeo. I watched this same homosexualist takeover of the Presbyterian Church (USA) for over a decade, fighting hard against it. Since entering the PCA back in 1991, I’ve watched the PCA follow the same path.

Those of you who think the PCA is a significant force for Protestant and Reformed Christian witness, remember Pastor Johnson’s appeal to the youthfulness of the pro-homosexual crowd in the assembly.

Remember also that God is not mocked.