Frequency of Communion in Calvin’s Geneva 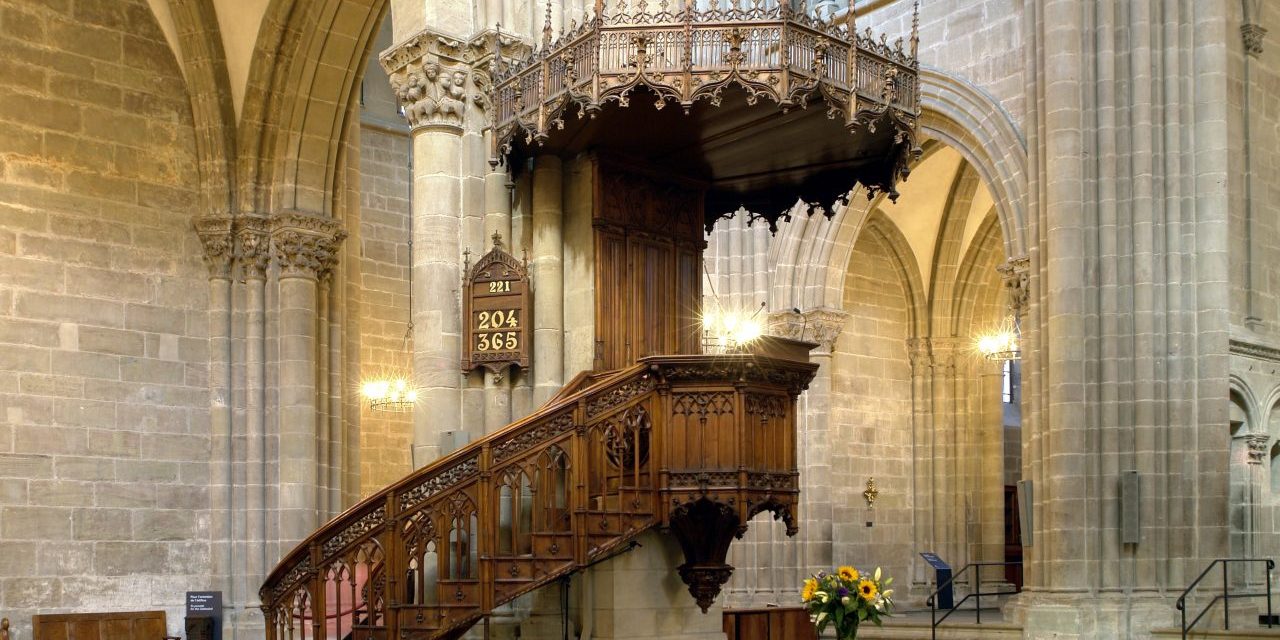 Before his banishment from Geneva in 1538, in “Articles concerning the Organization of the Church and of Worship at Geneva proposed by the Ministers at the Council” (Jan. 16, 1537) Calvin and his fellow Geneva reformers presented Geneva’s magistrates with an argument for monthly communion. His oft-quoted statement about weekly communion is taken from that document:

It would be well to require that the Communion of the Holy Supper of Jesus Christ be held every Sunday at least as a rule.

This is merely a parenthetical statement, though, within a larger and very different argument. After declaring that the Lord’s Supper was instituted by Jesus for “a frequent exercise of our faith,” then disparaging the Roman Catholic Church for her perversion of this ordinance which led the people into superstition, he writes,

But because the frailty of the people is still so great, there is danger that this sacred and so excellent mystery be misunderstood if it be celebrated so often. In view of this, it seemed good to us, while hoping that the people who are still so infirm will be the more strengthened, that use be made of this sacred Supper once a month in one of three places where now preaching takes place, viz., St. Pierre, Riue or St. Gervais, in such a way that once a month it take place at St. Pierre, once at Riue, and once at St. Gervais, and then return in this order, having gone the round.

We see that Calvin’s actual proposal was monthly communion—not weekly. This he commended and proposed because of the weakness of the people and the consequent danger of celebrating the Table too often.

So that there be no cause for contempt, but this high mystery be treated with the greatest dignity possible, it has seemed to us the more advisable course, that the ministers of the Word, on whom the office of administering all that pertains to the mysteries of God properly belongs, distribute the bread and the wine, the form and sacrament of the body and blood of the Lord. And so that this take place with fitness and without confusion or impropriety, we have proposed to make it our duty to show and indicate such order as the people ought to observe; to advocate one that avoids confusion, and will supply you with means that will be found expedient, that things be well conducted and we come with such particular reverence as Paul commands us.

Here we see how careful and precise Calvin was in laying out the proper reverent approach to the Table both in those who administer it and the manner and words with which they do so.

As we pointed out back in February at the Warhorn Shepherds’ Conference on worship, it seems clear the weakness of the people that so concerned Calvin included their unwillingness to tolerate the lengthy service such a reverent liturgy required. Read Calvin’s Lord’s Table liturgy including the sober fencing of the Table which always accompanied Geneva’s Protestant administration of this sacrament, and it’s clear why Calvin and his fellow Genevan pastors proposed monthly communion.

Indeed, even following Calvin’s return to Geneva in 1541, when the Ecclesiastical Ordinances were put in place they declared this concerning the frequency of communion:

Since the Supper was instituted by our Lord to be more often observed by us and also since this was the case in the early Church until such time as the devil upset everything by setting up the mass in its place, the defect ought to be remedied by celebrating it a little more frequently. All the same, for the time being we have agreed and ordained that it should be administered four times a year, i.e. at Christmas, Easter, Pentecost and the first Sunday in September in the autumn.

If the reader follows the above link to the Ordinances, he will read that edits and additions made by the magistrates of Geneva are bracketed. But no bracket appears in the above statement concerning frequency of communion. So then, again, Calvin with his fellow Genevan pastors directed that communion take place quarterly. (We take the “we” of the above statement to refer to Calvin with his fellow pastors in Geneva.)

We conclude that the modern fad of weekly celebration of the Lord’s Supper contradicts the pastoral wisdom, practice, and liturgy of Calvin and his fellow Genevan reformers.

It contradicts their pastoral wisdom which led them to avoid lending support to the idolatry of the Roman Catholic Mass by weekly communion, thereby needlessly exposing the people to the continuation of the very danger of sacramental superstition they were escaping.

It contradicts their practice, which became the almost-universal practice across the Reformed churches of Europe and England, of quarterly celebration of the Lord’s Supper. Some few celebrated monthly, but others even less frequently than quarterly.

It contradicts their Biblically reverent and sober liturgy which approach to the sacrament followed the commands of 1Corinthians 11—including most particularly the command “let a man examine himself.” This Biblical command and the extensive reasons given there in 1Corinthians formed the basis for the universal practice of fencing the table we find starting in Geneva five centuries ago and passed down through every Protestant and reformed church.

Why do we refuse to fence the table as all our Reformed fathers did before us?

There are likely many reasons, but several are obvious.

First, the Reformed church of our time has lost the Reformers’ pastoral zeal to protect their sheep from the soul-destroying errors of ritualism, ceremonialism, and sacramental superstition. Inquire of the modern quite-nimble Reformed pastor whose sermons are cheerfully graceful and lead up to the weekly “celebration” of the Lord’s Table or “eucharist” whether he warns his people against sacramentalism?

If the conversation continues, he’s likely to demonstrate his entire ignorance of the dangers that were the cornerstone of the Reformers’ sacramentology, nor that they considered this reformed sacramentology integral to their leading Christ’s sheep out of their Roman Catholic bondage into safe pastures and still waters.

Second, the Reformed church of our time is as unwilling as the Genevan Reformers to face the hostility of the people concerning the length of weekly worship services. Yet instead of removing the Lord’s Table from their weekly worship, pastors today remove Calvin’s liturgy from the Lord’s Table.

None of their people know this. Sadly, very few of the pastors themselves know it.

If someone presents the liturgy that Calvin, Knox, and their fellow reformers followed in Geneva to these modern purveyors and practitioners of what they claim to be “Calvin’s practice of weekly communion,” withhold the liturgy’s origin from them and, inevitably, they recoil in horror sputtering about its “negativity,” “guilt-tripping,” and “absence of joy.”

Calvin and his fellow Reformers never stopped guarding the sheep from ritualism, ceremonialism, and superstitious sacramentalism.

The modern reformed pastor remains blissfully unaware of these dangers and unconcerned of the destruction they pose to Christ’s sheep—starting with that sickness and death the Apostle Paul revealed within the church of Corinth.

The modern Reformed practice of weekly communion claims to be the restoration of Calvin’s sacramentology, but nothing could be further from the truth. It’s the sort of counterfeit one can expect to invade the the church when pastoral care is exotic or dead.