The Church reformed kneels in prayer 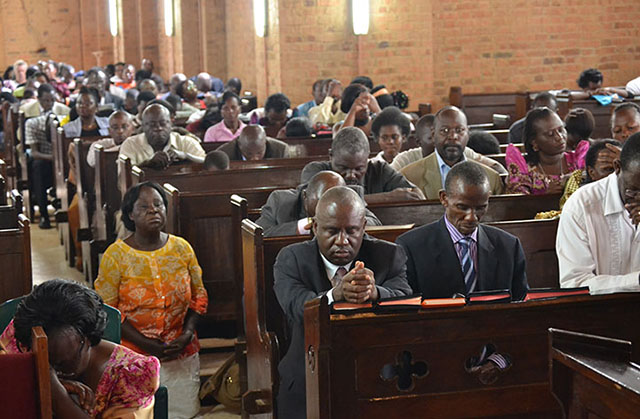 We live in a proud and decadent age when, following the lead of our pastors and elders, believers have abandoned that ancient and holy habit of bending our knees in prayer to our great and mighty God. In my significant experience of worship in Reformed churches in North America (and limited experience in other parts of the world), kneeling in prayer is a novelty.

Some believe kneeling is contrary to Reformed principles of worship, yet kneeling and lifting of hands were postures of prayer practiced and commanded by the Reformers.

Over on the Puritan Board, the question is asked whether kneeling in prayer during worship is allowed. Reading through three pages of answers, Scripture is hardly mentioned and it isn’t until the third page that anyone mentions the practice of Calvin and the Reformers. The mention is followed by silence, and soon the discussion ends.

Scripture presents countless texts showing these body postures of humility when we approach God in prayer: men kneel (Daniel 6:10; Acts 21:5), they fall on their faces (Numbers 16:22; Revelation 7:11; 11:16), they lift holy hands (1Timothy 2:8), and sometimes they both kneel and lift their hands to God (1Kings 8:54). Indeed, there is this command:

Come, let us worship and bow down, Let us kneel before the Lord our Maker. (Psalm 95:6)

Then Ezra blessed the LORD the great God. And all the people answered, “Amen, Amen!” while lifting up their hands; then they bowed low and worshiped the LORD with their faces to the ground (Nehemiah 8:6).

Following Scripture, it was the universal practice of Calvin and his fellow Reformers to kneel in prayer. Most of the time they don’t mention it explicitly—it is simply assumed. But occasionally, the Reformers write things demonstrating their practice.

For example, in the marriage service of Geneva, we have this instruction given immediately prior to the final prayer:

In The Liturgical Portions of the Genevan Service Book recording the orders of worship, wording of the liturgy, and detailed accounts of all aspects of the practice of worship in the first generation of Reformers in Frankfurt, Strasbourg, London, and Geneva, William D. Maxwell summarizes the “Attitude of Prayer”:

There can be no doubt that at this time (1556) kneeling was the common attitude adopted by Minister and people during prayer in the Reformed Church . . . . it was taken for granted.

Calvin …testifies to the actual Genevan custom [saying] he would have liked to restore the Absolution after the Confession of sins, but could not do so because so many of the people had acquired the habit rising from their knees before the Confession was ended.

The Book of Discipline in the French Churches, 1559, also orders that kneeling be the attitude during prayer:

That great irreverence which is found in divers persons, who at public and private prayers do neither uncover their heads nor bow their knees, shall be reformed; which is a matter repugnant unto piety, and giveth suspicion of pride, and scandalizes them that fear God. Wherefore, all pastors shall be advised, as also elders and heads of family, carefully to oversee, that in time of prayer all persons, without exception or acceptation, do evidence by these exterior signs the inward humility of their hearts, and homage which they yield to God; unless someone be hindered from doing so by sickness or otherwise.

The practice was the same in Strasbourg and Scotland. In 1557, the Glasgow Session exhorted “all persons in time of prayer to bend their knees to the ground,” and two years later, in 1559, the Presbytery of Glasgow commanded all “to humble themselves upon their knees in the kirk in times of prayer.”

…the early practice was consistently to kneel for prayer in all branches of the Reformed Church; it was in a decadent age that the practice changed.1

Quotes by individual Reformers could be piled up on this, but here’s a representative sampling from John Calvin:

The inward attitude certainly holds first place in prayer, but outward signs, kneeling, uncovering the head, lifting up the hands, have a twofold use. The first is that we may employ all our members (all the parts of our body) for the glory and worship of God; secondly, that we are, so to speak, jolted out of our laziness by this help. There is also a third use in solemn and public prayer, because in this way the sons of God profess their piety, and they inflame each other with reverence of God. But just as the lifting up of the hands is a symbol of confidence and longing, so in order to show our humility, we fall down on our knees. (John Calvin, Commentary on Acts 20:36)

Lifting up pure hands As if he had said, “Provided that it be accompanied by a good conscience, there will be nothing to prevent all the nations from calling upon God everywhere.” But he has employed the sign instead of the reality, for “pure hands” are the expressions of a pure heart; just as, on the contrary, Isaiah rebukes the Jews for lifting up “bloody hands,” when he attacks their cruelty. (Isaiah 1:15.) Besides, this attitude has been generally used in worship during all ages; for it is a feeling which nature has implanted in us, when we ask God, to look upwards, and has always been so strong, that even idolaters themselves, although in other respects they make a god of images of wood and stone, still retained the custom of lifting up their hands to heaven. Let us therefore learn that the attitude is in accordance with true godliness, provided that it be attended by the corresponding truth which is represented by it, namely, that, having been informed that we ought to seek God in heaven, first, we should form no conception of Him that is earthly or carnal; and, secondly, that we should lay aside carnal affections, so that nothing may prevent our hearts from rising above the world. (John Calvin, Commentary on 1Timothy 2:8)

As for bodily gestures customarily observed in praying, such as kneeling and uncovering the head, they are exercises whereby we try to rise to a greater reverence for God. (John Calvin, Institutes, III.20.33)

Let us take, for example, kneeling when solemn prayers are being said. The question is whether it is a human tradition, which any man may lawfully repudiate or neglect. I say that it is human, as it is also divine. It is of God in so far as it is a part of that decorum whose care and observance the apostle has commended to us. But it is of men in so far as it specifically designates what had in general been suggested rather than explicitly stated. (John Calvin, Institutes, IV.10.30)

…nothing prohibits a man who cannot bend his knees because of disease from standing to pray. (John Calvin, Institutes, IV.10.31)

We have given this exhortation many times before, starting back in 2004 on Baylyblog and almost every year since. Here are the posts dating from 2005 on.

Christ the Word and Clearnote Church, Bloomington, have had this practice for over a decade now, and it gives us joy.

Maybe your own church doesn’t command you to kneel? Maybe you and your family would be the only ones to kneel?

No matter. When he kneeled, Daniel stuck out like a sore thumb—and was reported to the leaders, almost losing his life for it. There’s nothing wrong with kneeling alone.

Why do we so flagrantly violate the Regulative Principle of Worship?