Sanityville: a forum for simple Christians 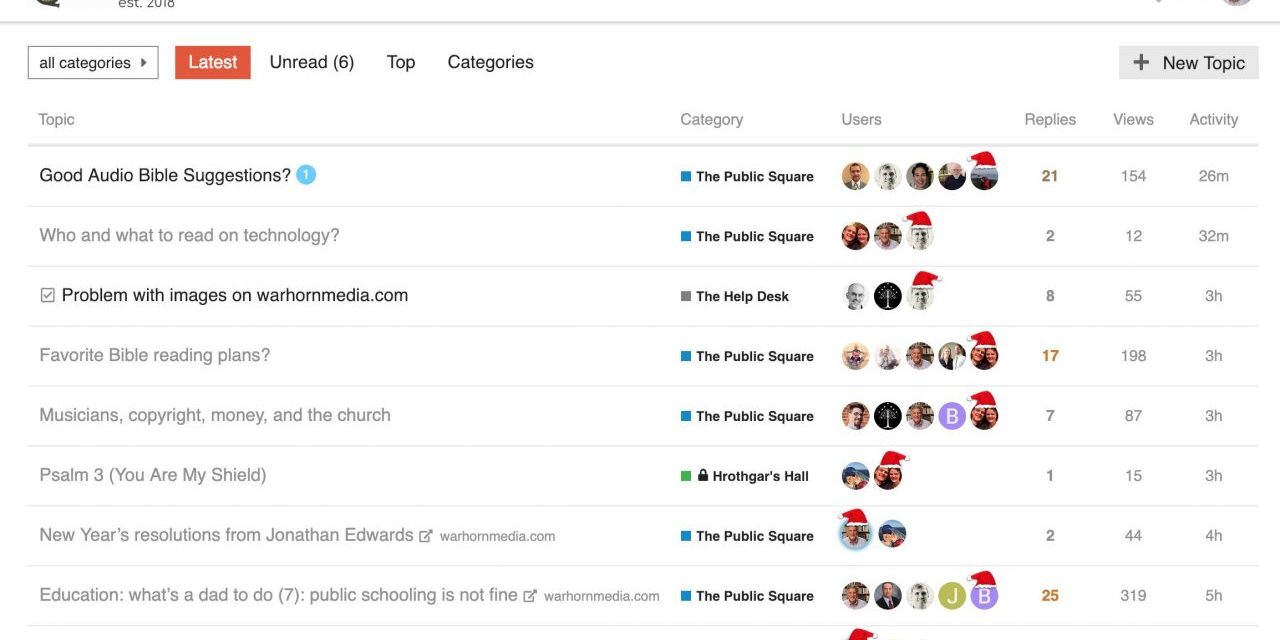 Maybe the majority of men who have been supportive of Warhorn’s work over the years are engineers (computer and otherwise) and coders. I’ve considered various explanations for why this is the case, but here I simply note it.

Now then, my (quite-sophisticated, technologically) sons, Joseph and Lucas, have set up an online forum that has quickly gained traction and loyalty among some of us. It’s specifically designed to subvert the censorship of historic Christian faith across social media by the godless men and women of Apple/FB/Instagram/Twitter.

That said, Sanityville is NOT for geeks. It’s easy to use and not at all intimidating. So man or woman, boy or girl, pastor, elder or deacon, Titus 2 woman or mother-in-Israel…

Come and check it out.

I spend a lot of time thinking about technology, and it’s a topic I’d like to devote some more careful attention to this year. (Maybe even write a little? We’ll see.) I’d be very grateful if you’d chime in and help me out with some reading recommendations.

The best book I’ve read on technology from a Christian perspective is From the Garden to the City by John Dyer. But it’s a short book, and I’ve been very frustrated that I haven’t seen much else written by Christians beyond it. Does anyone have any further recommendations?

Our information technology gives those who write the software we use every day an enormous amount of power to spy on us, harm us, trick us, steal from us and generally do stuff we don’t like. That power cannot be properly diminished and controlled so long as the software we use is non-free.

I’d be happy to debate this here if you have any thoughts about it, but I’d also be very grateful for reading recommendations for this topic. Most of the blog posts and YouTube videos I’ve seen on this topic have been produced by people with very anti-Christian beliefs and assumptions. So even when I take the time to wade through their stuff, many of the questions I have aren’t dealt with at all.

I’m also interested in the question of privacy. There is a great deal of talk about privacy in our culture today, but I’m not sure I’ve seen much from a distinctly Christian perspective.

There are certainly many more topics to consider, of course, but I suspect that’s a good start. I know @michaelfoster and @jtbayly think about this one, also. Maybe they’ll have something to suggest?

When I was a young man, I read a transformative book called “The False Presence of the Kingdom” by the French Christian prophet Jacques Ellul. In essence, the book warned that every time the church gets in cahoots with the civil magistrate, the church loses and compromise of the Gospel is inevitable. I have long opposed the cowardly and shameful Two-Kingdom gagging of the church’s prophetic voice while wishing they would recognize the sympathy Ellul would have for some of their legitimate concerns. On the other hand, no one could be more opposite Darryl Hart and acolytes such as Van Druningen than Ellul who was always taking personal responsibility and action in defense of true social justice—and doing so from and because of his Christian faith.

I mention Ellul here because I suspect his work “The Technological Society” would be helpful as a starting point for anyone seeking to understand our present bondage. I’ve meant to read it for years. Maybe others will be more disciplined and do so? Here’s a good starting place for learning more about Ellul and his work.

Also, I highly recommend Roman Catholics on this issue. Protestants rarely rise above sectarian bickering, seeming to be incapable of doing anything other than serving as the willing dupes of the barbarians at the gates. If I had not spent my life reading men like E. Michael Jones, Joe Sobran, and G. K. Chesterton, I would be a twittering fool. Love,

It seems like there are a lot of assumptions underlying your thesis. For starters, aren’t there always people who have power over us? Is that automatically bad, or just in a context of persecution/wicked authority?

Then, I also wonder what has convinced you that such power to harm can be mitigated by non-free software. I don’t mean to be cynical, but I’m doubtful about it for a few reasons.

Many more thoughts, but I’m curious what you’d say to this.

tbbayly: I suspect his work “The Technological Society” would be helpful as a starting point

Thanks for the recommendation. Will order it. But that’s different from reading it. lol