Maybe you haven’t noticed, but the Christian publishing industry and blogosphere are at war with men.

From The Gospel Coalition’s relegation of heterosexuality and endorsement of effeminacy to Desiring God and its neutered stance on the very masculine matter of armed self-defense to the halls of Christianity Today and their very public feminist agenda, there’s a not-so-subtle war being waged on men.

In a recent YouTube video in his SelfWire series, Dr. Paul Maxwell says this war on masculinity is a firmly-held and not-so-secret agenda within the Christian publishing world. A former writer for The Gospel Coalition (TGC), Desiring God and acquisitions editor at Moody Publishers, Maxwell documents the inner workings of the publishing world:

There is one piece of folk wisdom among Christian publishing that guides a lot of book acquisition and marketing. Men don’t buy books. Women buy books. That governs most publishing acquisitions and marketing strategy. So even books that we acquired for men were actually marketed to sell to women, mainly, to buy for their husbands or sons.

Maxwell says this bias plays into editorial hires which tend to be given to women or effeminate men who can speak to a predominantly soft-left female audience. The requisite message and tone are high on emotionalism, low on intellectual content, and heavily biased against traditionally signified masculinity. As Maxwell says, every article is basically a new way to make you feel guilty about not being spiritual enough.

By his estimation, based on industry metrics Maxwell claims the audience for most of these publishing houses and blogs is 80 to 90 percent female. If you’ve ever suspected TGC appeals particularly to soft men and leftish women, there’s no need for you to be suspicious. This is TGC‘s practiced editorial intent.

To borrow Maxwell’s phrase, mainstream evangelical culture has become a beta male culture. Which is why real men are flocking away in droves, not just from the aisles of Christian bookstores but from the pews of their local churches. What Maxwell says about Christian publishing could just as easily be said of pastors and the churches we lead here in North America: we don’t know how to speak to men, and thus prefer speaking to women and the androgynous.

We should go a step further than Maxwell. Christian publishing hasn’t simply been negligent in failing to reach men. We can’t stay in the middle of this war against God’s manhood and womanhood today without taking sides. There is no demilitarized zone.

Rather, not teaching and honoring Biblical manhood has inevitably led to the church and her publishers opposing all things manly. When Tim Keller showcased an effeminate ballet performance by three cute boys as his offertory in the PCA’s flagship church in Manhattan several years ago, it wasn’t innocuous, sexually. It was a hostile act against manhood. When John Piper castigated men for carrying a firearm in defense of themselves and their loved ones, his words were not innocuous, sexually. No, in both instances, Keller and Piper were painting a sign above the church’s door that read, “Men need not apply.”

It’s time to reject all the foolish allegiances so many of us have made to Reformed celebrities. We don’t need to be concerned for their welfare. The Christian publishing and conference tour will continue to feed them acolytes and build their bank accounts. Let the gay support the gay. Matt Chandler has no problem speaking their language, and women won’t object.

Maxwell’s video is helpful because it not only points to the problem, but aims in the direction of a solution. Ultimately, he suggests platforms like Christianity Today hire masculine men to curate content on their site. Of course, here Maxwell gives himself over to a delusional fantasy. Those groups’ abandonment of men is no accident. Or if it was at the beginning, it no longer is. Their feminism has led to their detesting men and they no longer have any desire to communicate with the guy who likes to hunt, wrench on a vehicle, and work with his hands. Again, let the dead bury the dead.

What is helpful is Maxwell’s analysis of the “intellectual dark web” and several of its key players and their ability to attract a masculine audience. Among them he mentions Jocko Willink, a former Navy SEAL; Jordan Peterson, a Canadian psychologist; Ben Shapiro, a conservative talk show host; and Joe Rogan, an irreverent mixed martial artist, UFC commentator, and podcast host. Maxwell goes a step further in identifying four characteristics of their podcasts or books that make them wildly appealing to real men. If you’re a pastor, blogger, writer, or podcast host, take note.

First, these men focus on the brute physicality of manhood. Jocko and Rogan are into mixed martial arts and talk regularly about disciplining oneself physically, getting ripped in the gym, and their exploits as soldiers, hunters, and fighters. It’s no shock that real men want to talk about muscles, military campaigns and wilderness exploits.

Second, these men are unashamedly nationalistic and patriotic. Meanwhile, Russell Moore and Matt Chandler, along with the Southern Baptists’ Ethics and Religious Liberty Commission, condemn love of country as the ultimate offense against the Gospel. On the other hand, Ben Shapiro and others are proudly American and possess the intellectual horsepower to back up their devotion. Again, it’s no surprise so many Christian men find Jocko or Shapiro more interesting than their pastor or men in their church who show contempt for those who take pride in and love their fatherland.

Third, these men are intellectually brilliant. Contrary to everything the publishing world and positively woke feminist culture claims, Maxwell points out that so-called alpha males are incredibly smart and require rigorous intellectual conversation. The emotionalistic drivel that dominates Christian conversation today is a 100-percent “Hell no!” from most men. We want more Rogan and his interviews with brilliant farmers, scientists, psychologists, and sports heroes. Forget Matt Chandler and his limp-wristed virtue signaling to Vice’s HBO crowd.

Fourth, these men don’t worry about what the cultural elites have declared taboo. They drink, smoke cigars, and speak in earthy ways that Luther and the authors of the Old Testament also spoke in. They address topics with ruthless directness, regularly offending leftish women and soft men. Again, it’s no surprise that men of the warrior culture find these things immensely appealing.

Practically speaking then, what does this mean for us? Noting that men are absent in the church, should we walk the Willow Creek trail? Should we do a consumer survey and take the experts’ opinions about what “men want” today?

Of course not. But where the desires of non-Christian men line up with biblical masculinity, the church should demonstrate it better than Jordan Peterson.

Here are a few suggestions.

First, don’t give the Evangelical Intelligentsia the time of day. Let us engage in a little bit of what some would consider taboo or irreverent by naming names, pointing to absurdities, and confronting the issues directly. Use Chandler’s books as kindling to start fires. Then while you’re warming up by the fireside, read Peterson (with eyes of discernment) and learn the tale of the lobster. Stand up straight, put your shoulders back, and face the enemy with courage. It will do your soul immeasurable good. This is how the prophets taught God’s people. This is how David defended his sheep, killing the bear and the lion.

Second, real men need to dedicate themselves to creating better content. Since in this very tamed-down and lamed-down epoch of Diet Christianity, the church and its teaching are rife with effeminacy, we need to find genuine expressions of masculinity and start imitating them. You are what you read, so take a walk through history and spend time with generals, war heroes, and the Chestertonian giants of older books who knew nothing other than authentic masculinity and championed it without being aware they were doing so.

Third—and this is absolutely vital—we have to be actively engaged in the art of becoming real men. There’s no room for put-ons and posers. We must repudiate closet hipsters with their sham formula for attracting men to a podcast or social media platform. No virtue signaling our alpha maleness in the opposite direction.

How do we reach and speak to men? First and foremost, we must be men in pursuit of masculine virtues. No faking it. No perfection. Just the battle scars of those in pursuit. 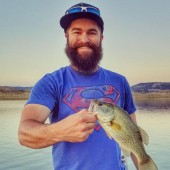 Eric Conn is a pastor in the rugged mountains of Northwest Colorado. He is an avid outdoorsman, hunter, firearms enthusiast, and a freelance writer in the gun industry. Husband, father, and former sports journalist, he enjoys pursuing the art of biblical masculinity.