Back in April the state of California passed legislation that criminalizes “advertising, offering to engage in, or engaging in sexual orientation change efforts with an individual” under the state’s consumer fraud laws. If you believe and declare that the gospel of Jesus Christ can change the hearts of men, you are a fraud according to the state of California.

Of course, proponents of the legislation are quick to assure everyone that it will in no way infringe upon religious liberties or free speech. Sure. The anti-Christian thrust of our nation’s courts and laws has been clear for years now, and the regular assurances given to Christians that this criminalization of Christian witness poses no threat to our religious freedom is laughable.

Beyond our courts, liberal social media companies are also bringing their considerable weight to bear in our nation’s suppression of Christians’ First Amendment rights. Last month the movie Gosnell was released documenting the true story of the Philadelphia abortionist who was found guilty of a few of his crimes. Facebook refused to allow the movie to be advertised on its platform.

Here at Warhorn Media, Facebook regularly censors our own content, refusing to allow us to advertise it and using their algorithms to prevent others from seeing it. Others, including Robert Gagnon and Peter LaBarbera, have had Facebook and Twitter suspend their accounts for posting the Biblical doctrine of sexuality. Even secular, scientific information about the consequences of sexual immorality is prohibited. 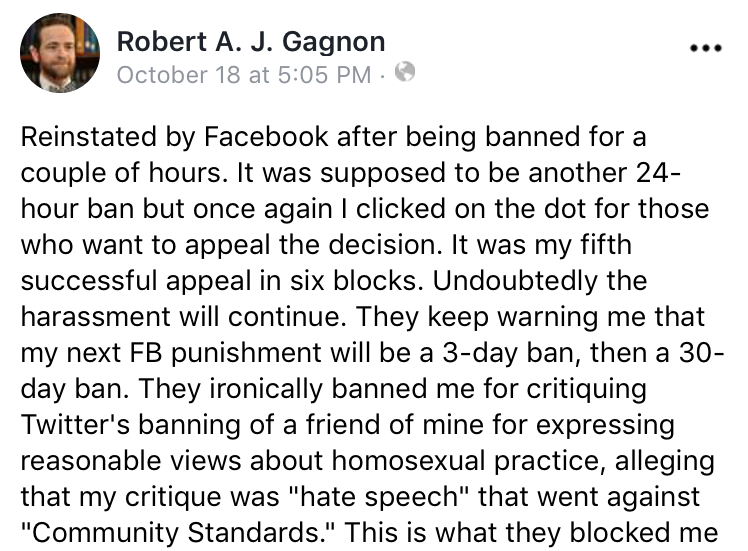 What did Peter LaBarbera say that caused his suspension? He encouraged a homosexual man to “strive for lifetime abstinence” and said “sodomy is a sin & … the homosexual variety especially spreads disease.”

In other words, LeBarbera engaged in “orientation change efforts,” also known as “reparative” or “conversion therapy”1

Let it be stated clearly: like the nation’s legislators and courts and educators and media, Facebook and Twitter are intentional in preventing the public proclamation of the Gospel of sin and righteousness and judgment. Worse, social media has almost complete control over a lot of the public discourse of our nation. As Gagnon warns, “Undoubtedly the harassment will continue.”

That’s not to say that it’s hopeless and we should give up. On the contrary, we need more men like Gagnon who are willing to speak the truth of “sin, righteousness and the judgment” boldly in the public square and call men of every tribe, nation, and sexual orientation to repentance in and outside the church.

But if you’re a Christian who loves the Bible and knows you shouldn’t be ashamed of any of it, news like this may make you feel like the walls are closing in. The heat is being turned up. It feels like being on an island that’s sinking, and every day there’s less and less ground available. CS Lewis warned that the world will tell you that you can have your religion in private, and then they’ll make sure you’re never alone.2

And then it gets worse.

The only thing worse than godless men seeking to silence Christian witness is fellow Christians doing the same. Like a perverse game of 1-2-3 Quiet As a Mouse in a burning house, where the first kid to to yell “Fire!” gets beaten with sticks, Christians have become some of the most effective and brutal in punishing those who confess their Christian faith publicly.

About a decade ago, Rob Bell released the video Bullhorn. In it, Bell casts his own glorious vision of a future in which Christians themselves are the ones to silence the world’s last prophet. Bell attacked public gospel proclamation with these words: “We don’t understand all the condemning and converting. We don’t understand what it has to do with Jesus’ message.”

Sadly, since Bell’s video was released, Christians have been repeating Rob Bell’s ideas in the intervening years—including some that should really know better. Wanting friendship with both Jesus and the world, the Church has lost Jesus. Sound of Sanity had a good episode on this. Check it out.

Al Mohler’s condemnation of reparative therapy (see also) is a good example of Bell’s poison at work in the church.

Recently, Cincinnati was in the process of passing one of these laws criminalizing reparative therapy, and throughout the process Christian men in Mohler’s sphere remained stolidly silent. In the name of being “gospel centered,” these pastors defended this law—a law which prohibits Christians from proclaiming God’s law and Gospel to minors.  If that’s being gospel centered, you can count us out.

Cincinnati’s city council was denying God’s law and the transformative power of His Gospel, declaring the goodness of sexual perversion and “degraded passions,” and seeking to trap people in their sin permanently, but Christians and their pastors who spoke in opposition to the law were condemned by fellow Christians. A few years ago, Al Mohler called a press conference to state his opposition to reparative/conversion therapy, so now his followers had no idea why opposing the law had anything to do with the Gospel of Jesus Christ.

Bell spoke for Mohler’s followers in Cincinnati when he said nobody wants to “end up getting painted with the same brush” as the offensive guy with the bullhorn.

Like the disciples, when confronted with faithful gospel preachers, they complain “Do You know that [they] were offended when they heard this statement?” (Matthew 15:12).

The man Christians find offensive and condemn is not the one criminalizing the reading, preaching, and counseling of Scripture, but the one who boldly points out our culture’s sin and calls men everywhere to repent. But there are only two ways to avoid being seen as crazy and getting attacked by the world for the offense of the gospel. Either the world can repent, or you can repent of calling the world to repent.

Thus, many Christians have joined their voices to those enemies of God seeking to silence Christian witness in the public square. “It’s needlessly offensive,” they say. “What’s with all the condemning and converting? People are laughing at you! Don’t you see how ashamed other Christians are to hear you preaching these things? You don’t understand grace. You’re not gospel-centered. You’re making it harder to win souls for Jesus!”

If you’ve read this far, it’s likely you have your battle scars from the world and the church. Maybe even your family. It’s also likely you’re finding it difficult to rejoice because you have been found worthy of suffering shame for Jesus’ sake (Acts 5:41; 2 Timothy 1:8).

Maybe you believe men should be manly and women should be feminine and that how you dress or do your hair is a public declaration (or repudiation) of your God-given sexuality. (Gasp!) Maybe you’ve even gone so far as to attempt to think these things through and discuss them with other Christians. (Double gasp!) Maybe you’ve become convinced shame is a gift from God. Maybe you believe one of the most grace-filled and loving things you can do when your children disobey is to spank them. Maybe you’ve realized there’s a difference between a theological lecture and a sermon, and you’re desperate for some imperative mixed in with the declarative on Sunday morning.

We know what you’re feeling: Crazy and maybe a bit surrounded. We feel it, too. But we trust that God is at work in this world and that the “earth will be filled with the knowledge of the glory of the LORD” one day.

We started Warhorn Media to continue the reformation, doing some small part to bring in the Kingdom of God. From worship music that celebrates God’s wrath and justice (not just with his mercy and love); to testimonies of the monumental faithfulness of God in the lives of ordinary Christians today; to writing that celebrates discernment; to books on fatherhood and homosexuality; to podcasts that mint new words, like “poportunism;” all our work is seeking to strengthen and encourage you in the work of reformation—to remind you that you aren’t crazy, even if it sometimes feels like it.

We hope you share our desire and goal—not to mention that crazy feeling— and that’s why you appreciate our work. We want to be the first to tell you that you aren’t insane, even if other reformed Christians think so. We want to put some strength in your spine, and encourage you in the work. Our prayer is that everything we do is strengthening and encouraging you, your pastor, your elders, your wife and children, and all your brothers and sisters in Christ in the kingdom work of reformation.

As sane men, our hope is not in men, much less numbers of men. Still, working together is sweet fellowship. 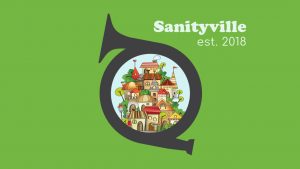 And you know what? Good news! There’s more of you out there than you think! Sometimes, like Elijah, we can feel like God has left us all alone. Not true. We know because we hear from so many of you. You are part of a larger group. Not people who have never caved under pressure, but people who have and then repented and re-engaged in the work, by the grace of God. Not people who are internet commandos, but men who seek to build and reform Christ’s church both online and in person.

If that’s exciting to you, you’re going to love Sanityville.

We’ve already heard from a lot of you about early access, and we’ll be sending out invites soon. If you don’t have your name on the list yet, it’s not too late.