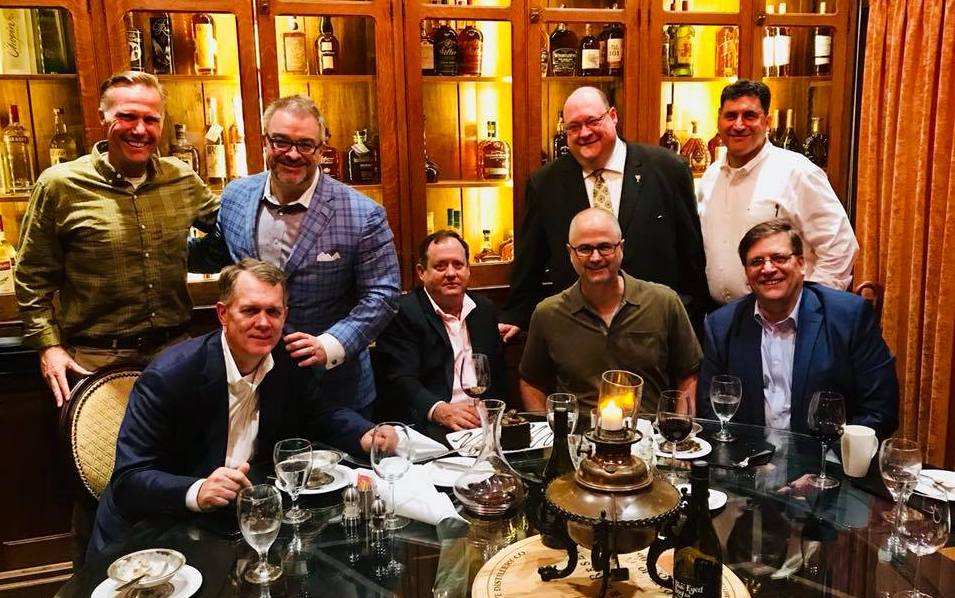 “So Paul’s opposition to Peter was both ‘to his face’ (verse 11) and ‘before them all’ (verse 14). It was just the kind of open head-on collision which the church would seek at any price to avoid today.” —John Stott on Gal 2:11-14 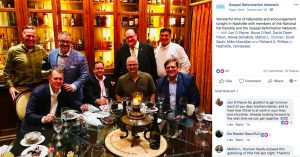 It is jokingly said “PCA” stands for Pipes, Cigars, and Alcohol. The National Partnership (the left-wing non-ecclesiastical faction in the PCA) and the Gospel Reformation Network (the right-wing non-ecclesiastical faction in the PCA) have given a new seriousness to that PCA moniker. Over bourbon in Nashville, representatives from both groups met together in what one attendee described as a “wonderful time of fellowship and encouragement.”

Undoubtedly meeting with those you have disagreements with and making peace with them is an encouraging, wonderful thing. However, the question is, has the Gospel Reformation Network (GRN) really made peace with the National Partnership (NP), and if so how?

If the GRN members in this meeting discovered that they had been wrong in their concerns about the NP, or convinced the NP men to substantially change their minds on major issues of disagreement, then that is wonderful news indeed. If, on the other hand, the GRN has compromised its principle of zeal for the peace and purity of the PCA, there is very little reason for its continued existence.

Yesterday, Jon Payne—the “convener” of the GRN council—offered what appears to be an official olive branch and a personal apology on the GRN’s blog to the National Partnership as the fruit of this meeting. According to Payne, the men who gathered in Nashville were:

Payne’s piece makes clear his conviction is that there is nothing to really worry about after all in the National Partnership, or indeed in the PCA as a whole. Peace is already here, aside from a few (mostly conservative) troublers of Israel. The differences are simply “different conclusions on how best to apply our Reformed Confession.”

One could have been excused for thinking that the GRN and NP were in opposition to one another in some way, but Payne explains that the two networks are not “at odds with each other.” He goes on to deny “that they are in different places theologically, confessionally, and philosophically.” Rather, he claims they are both “seeking to foster biblical fellowship, denominational health, and mutual encouragement” and simply have “differing perspectives.” They are “not opponents” but “teammates and friends.” In the end the differences between GRN and NP turned out to be simply “misunderstandings” and “differences of opinion among those who are in the same camp.”

Even more astoundingly, Payne claims that dangerous “trends related to the sexual revolution, women’s ordination, and social justice” do not have a “serious foothold in our presbyteries.”

As I think about Payne’s summary of the meeting and his benevolent description of the National Partnership’s work, I can’t help but think the liberal National Partnership is delighted with the outcome. I’m not so sure the members of the GRN will be as pleased.

Notice Payne’s willingness to lump the NP men—pastors and elders responsible for making the PCA hospitable for the celibate, gay Christian movement—in with the GRN. They are both networks “seeking to foster biblical fellowship, denominational health, and mutual encouragement.” If this is really what the men of GRN think, this has been a great coup for the National Partnership.

Indeed, NP member Scott Sauls shared Payne’s blog post, saying, “This conversation that we got to have across PCA tribes (which highlighted points of both agreement and disagreement) has gotten me more optimistic about the future of our denomination than I have ever been before.”

Payne and Sauls are both optimistic about peace in the PCA, but Payne’s pursuit of peace might better described as “suing for peace.” Wikipedia explains, “Suing for peace is usually initiated by the losing party in an attempt to stave off an unconditional surrender”1. So what are the conservatives seeking to hang on to? Payne’s description of the PCA as “our almost half-century old denomination” stretches hard to give the PCA stature and age and importance. But it is a young, small denomination that will quickly fall if it does not do the work of disciplining those shepherds and churches that are being unfaithful. That is to say, if we refuse to use the tools of loving correction, rebuke, and discipline—tools Christ gave his Church to protect the true peace and purity of the body—we will not have a denomination for long.

This meeting, as it has been described publicly so far, does not represent the work done with such tools.

Payne is content to receive private assurances from a few NP men that nobody wants to ordain women elders, and that they have slight hesitations about Revoice. Apparently this is enough to establish proof of the purity of the church, and peace is now a given. With all due respect, such a position is absurd.

Nor is there any indication in what Payne has written that the liberal NP men intend to cease hostilities at all. Flat denials of wrongdoing and claims of being misunderstood are part and parcel of the tactics of liberals engaged in the work of undermining denominations. Meanwhile, the NP men accused Payne of sometimes being “harsh,” and he has “taken it to heart.” Now, instead of fighting against liberalism Payne has turned his sword against those who would dare to attempt the biblical work of judging the fruit and motives of their fellow pastors and elders.

When have men in the church seeking to undermine its teaching ever stated forthrightly their intention to do so? And when have men on the path to terrible error ever had the intention of ending in such error?

To be blunt, meetings of influential pastors and representatives of factious non-ecclesiastical partnerships do nothing to guard the peace and purity of Christ’s church. This particular meeting has not resulted in greater peace and purity in the PCA, but a deformed unity, which undercuts the work of discipline moving forward. Discipline is how peace is pursued when men are in sin and error and will not repent. And the courts are how discipline is administered in such situations.

Unity without peace and purity is the fruit of influential pastors glad-handing one another without the intentionality and accountability of ecclesiastical discipline. Ironically, in another post on GRN’s website, Payne himself makes a similar point:

“A serious problem arises, however, when networks and partnerships constituted of PCA teaching and ruling elders go beyond public and transparent ministry to private meetings and ecclesiastical intrigues for the purpose of winning votes and transforming the denomination.”

Now, however, after having such a meeting, Payne has declared his own conviction that though there are dangers related to “sexual revolution, women’s ordination, and social justice,” those dangers do not come from others within the PCA, but from without, via mainline protestantism, evangelicalism and the winds of secularization.

Where is the proof concerning the ministries of the men he met with? We are required to take his word for it based on this private meeting. And given his conviction that such danger is in fact all outside the denomination, his judgment is hardly credible.

In 1 Timothy 6:3-5, Paul warns us against those inside the church who do not agree “with the doctrine conforming to godliness.” Calvin comments on the text:

“If the Apostle only shewed that the doctrine of salvation is thus rendered useless, even that would be an intolerable profanation; but far heavier and fiercer is that reproof, when he says that evils so pernicious, and plagues so hurtful, spring from it. From this passage, therefore, let us learn to detest (σοφιστικὴν) sophistry as a thing more destructive to the Church of God than can easily be believed…

Paul forbids the servants of Christ to have any intercourse with such persons. He not only warns Timothy not to resemble them, but exhorts him to avoid them as dangerous plagues; for, although they do not openly resist the gospel, but, on the contrary, make a false profession of adhering to it, yet their society is infectious. Besides, if the multitude see that we are on familiar terms with those men, the danger is, lest they insinuate themselves under the guise of our friendship. We should, therefore, labour to the utmost, that all may know, that so far are we from being agreed with them, that they have no communication with us.” 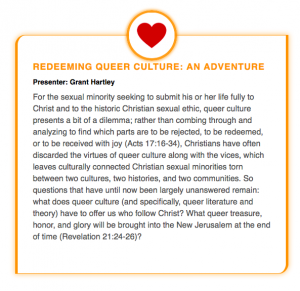 Payne is now on the record as being in friendly communication and agreement with men such as Scott Sauls, who pioneered the gay celibate Christian movement in the PCA with his Same-Sex Attraction Forum back in 2014, out of which Revoice and many other bad fruits have sprung. We have chronicled the bad fruit of the ministry of Scott Sauls, responding publicly to his public statements in order to warn the sheep.

Having met with Sauls, Payne and a few other GRN men are convinced that, rather than warning against Sauls, they should make peace with him and turn their combined attacks on those that warn against this false peace.

If the Apostle Paul considered Peter’s associations cause for public rebuke, then what should the righteous do when it comes to the wickedness of Sauls, Revoice, Greg Johnson, Memorial PCA and their cheerleaders, the National Partnership? Nothing less than public rebuke and an exposure of their deformed doctrines in order to warn the sheep away from them.

It is only through such warnings that the fight is engaged. And it is only through victory that true peace and purity are won. Among those seeking to lead men into error we can have no unity.

Here are links to 85 posts documenting the history and leadership of Revoice, critiques of many of Revoice Conference talks, Covenant Theological Seminary’s denial of responsibility for grads and faculty who led and participated, and Missouri Presbytery’s 150,000 words in Revoice’s defense.

These Revoice posts have had well over 100,000 views here on Warhorn Media.