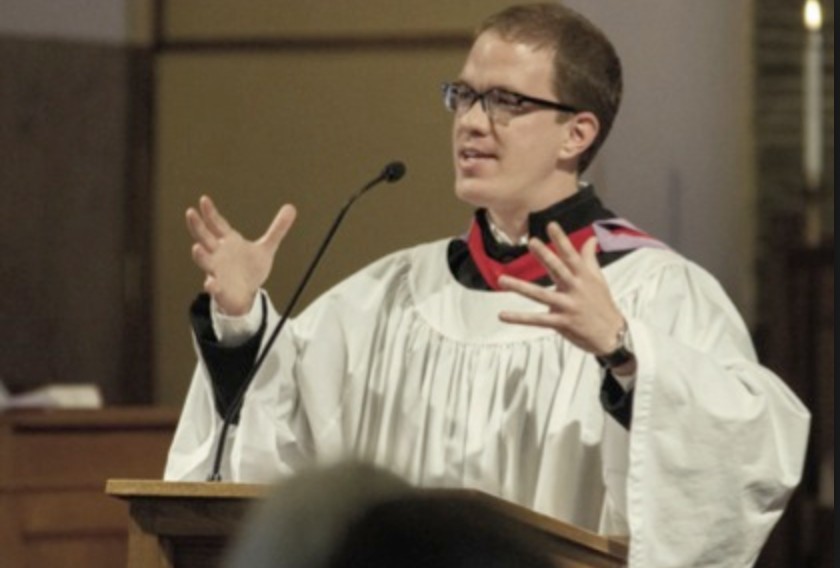 Wesley Hill of “same-sex spiritual friendship” fame spoke at Revoice’s pre-conference. What must we know to understand his message?

If you haven’t read Hopkin’s biography of Simeon, you really should—particularly if you are a pastor serving in a church in a university community and the leaders of your church are hostile to the Gospel. Charles Simeon was there, but ten times worse, and reading his life story will be a great encouragement to you to persevere in your calling.

Since I have great thankfulness for the godly faith and pastoral work of Simeon, I was disgusted to see Hill claim Simeon in support of his promotion of same-sex spiritual friendship. “Seriously,” I thought; “Charles Simeon?”

In his piece, Hill quotes his fellow Revoice speaker Eve Tushnet dissing the “become straight option.” When Hill and Tushnet publically announce and affirm their same-sex longings, they get irritated by faithful Christians who call them to seek the Holy Spirit’s power for redirecting their longings toward the opposite sex.

Such loving exhortations anger Tushnet, Hill, and their fellow Revoicers. So, with the audacity typical of the SSA, LivingOut crowd, Hill presents an excerpt of a letter written by Charles Simeon providing pastoral care to a young female correspondent. Hill claims the following text by Simeon is a defense of the “same-sex spiritual friendships” he and Tushnet promote:

In your letter of this morning you express a fear that you may love your dear Mother or a friend too much; and I am anxious to correct that idea without loss of time; first, because it is a source of disquiet to the conscience, and next because it is an error which almost universally prevails in the Church of God. That we may show our love improperly I readily grant; but that we can love one another too much I utterly deny, provided only it be in subserviency to the love of God. I think I have explained to you that word fervently (‘see that ye love one another with a pure Heart’): its precise meaning is intensely. No two words in any two languages more exactly agree than ‘intensely’ does with the original. If then our love be with a pure heart, this alone were sufficient to establish the point. . . .

Christianity does not encourage apathy; it is to regulate, not to eradicate, our affections. It admits of their full operation, but tempers them as to their measure and sanctifies them to the Lord. I have often been comforted by knowing that Lazarus and his sisters were peculiarly beloved of their Lord, and that John was an object of His more than ordinary attachment; and from hence you will see that, if I have written this for your instruction, I have had an eye also to my own vindication, if I should appear to err in the discharge of the most delightful of all duties.

According to Hill, the above text proves Simeon would counself the same-sex “spiritual” friends of today to “regulate” rather than “eradicate” their same-sex “affections.” But of course, Simeon was not talking about sodomitic or lesbian affections. He was saying absolutely nothing about Tushnet and Hill’s “same-sex spiritual friendships.” Nevertheless, Hill trots out Simeon’s commendation of same-sex friendship and love as if it were a commendation of same-sex friendship and love.

You see what happened in that previous sentence, right?

Most of the time, Tushnet, Hill, Spiritual Friendship, Revoice people use “same-sex” to mean friendships and intimacy between those who announce their homosexual, gay, or lesbian desires. But every now and then, they use “same-sex” to refer to friendships and intimacy between those who have normal, godly, natural, Biblical heterosexual desires. Honestly, though, who in their right mind has ever spoken of godly, normal, heterosexual, tender, intimate, Christian friendship—Christian brotherhood and sisterhood—as “same-sex?”

Only effeminate men who resent being called to manhood in their sexual desires would be so perverse as to cite the love of David for Jonathan and Ruth for Naomi in support of today’s “same-sex spiritual friendships.” In our battlefield today, everyone knows precisely what “same-sex” love and desires are, and that it is utterly perverse to claim this is what David and Jonathan and Ruth and Naomi had with each other.

“Same-sex” desire, longings, and relationships among self-affirming homosexuals is the central theme of this Wesley Hill, Eve Tushnet, Gospel Coalition, LivingOut.org, Spiritual Friendship, Revoice crowd. What makes them allies is their unison voice in promoting the permanence of homosexual orientation and opposing “reparative therapy,” “conversion therapy,” or “sexual orientation change.” They are united in repudiating any call to redirect their disordered, unnatural, and shameful same-sex sexual desires. According to their homosexualist ideology, every call to them to plead with God for change in their sexual longings and desires is tantamount to a call to them to repudiate the person God made them.

This is the context for the doublespeak and deceptions that characterized Hill’s Revoice appearance. He stayed in-type.