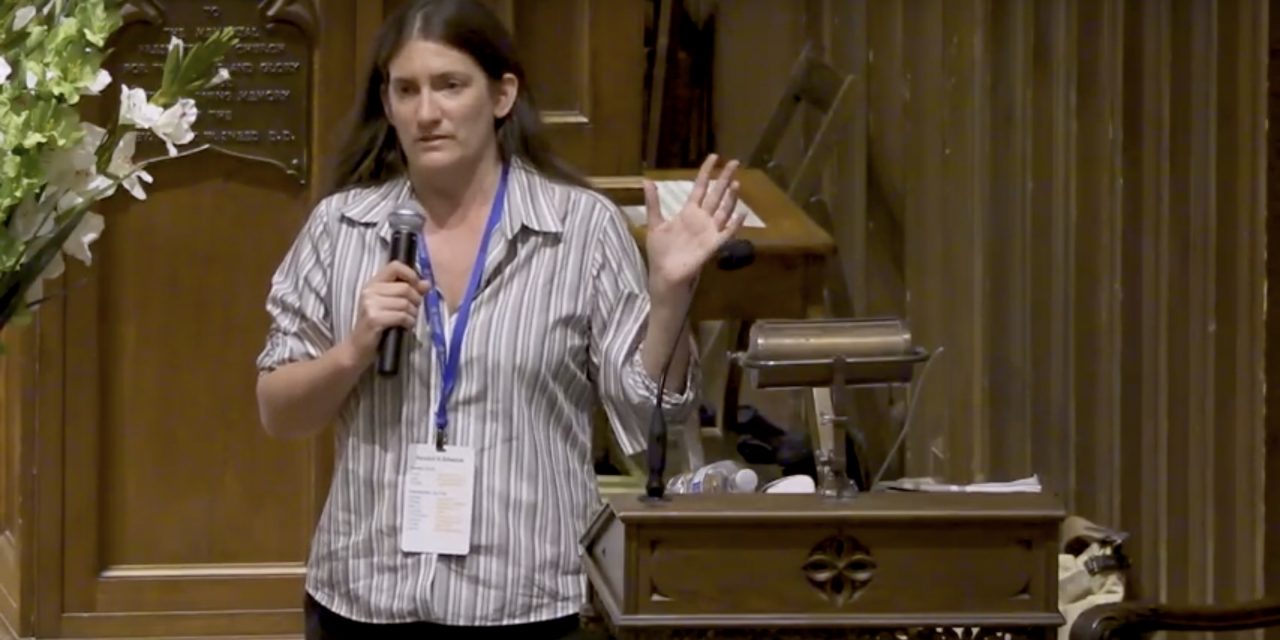 On November 6, 2014, when First Things held a book-signing for Eve Tushnet’s “Gay and Catholic”  in their NYC office, I dropped my (charter) subscription. Say what you will about Tushnet’s trajectory away from an ultra-liberal nonChristian upbringing and First Things’ reputation for conservatism, it was clear then that “conservative” Christians had adopted a radical new sexual agenda. Years later, as part of that same movement and desperately clinging to the “conservative” label, the Revoice conference planners hired Miss Tushnet to give the message at their first plenary session.

This is no idle or uncharitable observation. As a speaker’s rate of blinking can communicate their stress level and reveal lies, so these filler words communicate hesitation, doubt, and a bad conscience. This becomes particularly evident when Miss Tushnet moves into her most wicked claims.

Here is a sentence showing how her use of “uh” demonstrates her bad conscience about what she is saying. Tushnet is in the midst of claiming the relationship between Jesus and John the disciple as proof of the presence in Scripture of the “gay Christian” identity and “same-sex love” she and the Revoice men and women share. The example occurs at 10:01:

“Uh, and speaking of Jesus, uh, perhaps the most striking, uh, example of same-sex love being used as a way to teach us what love of God is, what discipleship is, uh, John.”

But it gets worse just a few sentences later at 10:34:

“Uh, his (John’s) relationship with Jesus is unusually intimate, uh, …physically he leans on Jesus’ breast at the last supper, uh…”

Jesus and John. At the Last Supper. In the Upper Room. Side by side. Eating.

This relationship between Jesus and John is the third relationship of Scripture (the other two are David and Jonathan and Ruth and Naomi) in which Tushnet stakes her claim that Christian “gays” will find support for their gay desires in Biblical relationships. It is irrefutable that when she speaks of gays throughout her message, she is speaking of their sexual preference for the same sex. She is not talking about normal friendships. She is talking to gays about gay same-sex identity and desires.

In her own words:

I think a revival of same-sex love would be good for everyone. But here I’m actually speaking to a totally different aspect of the situation. Specifically, for gay and same-sex-attracted people… they begin to realize that some of the longings and desires, uh, that they have always felt separated them from God, and from other Christians, and from their churches may actually be places where God is working very deeply and places that are ins-, that are, uh, that there is guidance in scripture and in our Christian history for the expression of those loves.

In other words, Tushnet’s claim is that the “unusually physical intimacy” of Jesus and John during the Last Supper is the most authoritative comfort in the Bible for Christian gays who sexually desire their own sex.

Again, this is blasphemy.

We’re reminded of the old adage, “a thief thinks everyone steals.” Tushnet sees gay, same-sex love between Jesus and John because she and the men and women of Revoice are in bondage to gay, same-sex desire.

When Tushnet uttered these words, those present who feared God should have stood up and cried “blasphemy,” silencing Miss Tushnet in defense of their Savior and Lord. No one did.

That’s why the audience laughs when she winks at the gay community’s collective inability to restrain themselves physically, asking, “Um, what is, for us, the basis of that obedience? Uh, it’s not typically that we’re particularly good at it.” But the real laughter and even applause is reserved for after her next sentence where she describes them as “Aspiring to the fidelity of David.”

Tushnet goes on to posit that obedience will only come when they love the law of the Lord. This is true, but the sad reality is she and the audience have no hope they can ever get there. Her penultimate sentence is, “I think for many of us, certainly for me very often, it’s like ‘uh, how do I love your law, Lord?’ (laughs, audience laughter)”. They acknowledge with their united laughter that their desires themselves chafe against the law of God. In her final sentence, she states that, as they get to know who God is, they will love His law.

But what law given by what god is she speaking of? Not the God of Abraham, Isaac, and Jacob Who gives His law through Moses. Not God the Son Who revealed His law recorded in the Gospels. Not God the Holy Spirit Who speaks through the Apostle Paul in Romans 1 and 1 Corinthians 6. Certainly not the law of God proclaimed by the Church down through the past two thousand years.

Miss Tushnet posits the tired old liberal gospel where “God is love” means we don’t need to fear Him.

Contradicting the Old and New Testaments and every church father for the past two millennia doesn’t faze Miss Tushnet, in spite of her verbal hesitancy. She is confident she and her fellow “gay Christians” will be able to deform the church. Her goal is a world without shame where nobody believes that God condemns homosexual lust or that He blesses those with this perverse temptation by clothing their temptations in His wonderful grace of shame.

Miss Tushnet has a dream, that one day soon you will “hear people casually say ‘Oh, well, y’know, I grew up in the church, so when I came out I didn’t really have any doubt that God loved me, because I was raised Christian.'”

This prophetess of Baal was inside the Presbyterian Church in America’s Memorial Presbyterian Church prophesying her sacrilege and blasphemies, but no prophet of God was found to call down fire from the heavens. Not even Vice President of Covenant Theological Seminary, Jay Sklar PhD.

Joseph Bayly is the founding pastor of Christ Church in Cincinnati, OH, and acquisitions editor for Warhorn Books.