Is Sauls too among the Prophets? (Part 1) 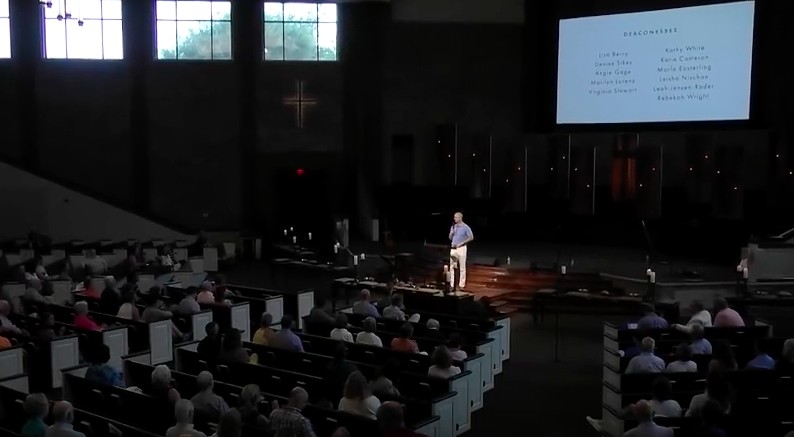 …the people said to one another, “What has happened to the son of Kish? Is Saul too among the prophets?” (1 Samuel 10:11)

As feminism and gay Christianity advance from the coasts into the hinterlands of the PCA, conservatives sleep. In middle America’s St. Louis, the upcoming ReVoice conference is the coming-out party for Memorial Presbyterian Church’s (PCA) celebration of the gay identity. Further south in Nashville, Pastor Scott Sauls of Christ Presbyterian Church Nashville (CPCN) has convinced his elders to open the diaconate to commissioned women deacons. Sauls is on a prophetic mission to do for women down south what he and Tim Keller did for them up north in New York City where male and female deacons together were called “church officers” and “deeks,” and the head over all their deeks was a woman. Blazing the trail to the full ordination of women, Sauls remembers he’s down south and scrupulously follows the guidelines of the report of the PCA’s 2017 Ad Interim Committee on Women Serving in the Ministry of the Church. Tim Keller’s wife, Kathy, served on that committee.

Team-tagging with Sauls, Nashville Presbytery is proving its progressive commitments by overturing General Assembly to open board positions to women and asking it to extend sympathy to overburdened and under-appreciated pastors’ wives. With Keller having stepped down from his pulpit in New York City and his protege Sauls gone to Nashville, the mantle of progressive leadership is moving from Metro New York to Nashville Presbytery.

Sauls’s work of destruction is perfectly predictable. Back with Keller at Redeemer, in 2009 Sauls ordained a female deaconess during a worship service. It was still scandalous back then and a ruckus was raised across the PCA, forcing Sauls to announce his ordination of one of Redeemer’s women “officers” had all been a big mistake.

You got that, right? “Commissioned.”

All the verbiage of the letter and essay Pastor Sauls sent to his congregation reeks of sanctimony, but the content demonstrates disdain for the Scriptural commitments of historic Presbyterian polity, ecclesiology, and anthropology.

Celebrating the New Role of “Deaconess” at Our Church

The following is a letter [that] was sent to our Christ Presbyterian congregation, announcing the new role of “deaconess” at our church. Links provided in the letter should explain the many reasons why we celebrate this new initiative. Please join us in prayer as we begin our long-awaited implementation with eleven amazing, commissioned women who will partner with our ordained deacons to design, implement, and lead our ministries of mercy. Thank you.

Sauls demands God’s people join him with him to “celebrate” his “new initiatives” without informing them his happy place is built on new interpretations of Scripture. What Sauls celebrates is a new office in the church that is in opposition to the doctrine of Scripture and the authority of the Book of Church Order. Godly elders should decline to celebrate, calling for a solemn assembly instead.

To our Christ Presbyterian Family,

As I hope you are aware, we will hold a congregational meeting this coming Sunday, July 8 at Christ Presbyterian (time and location here). The short meeting will cover several important matters—including the election of new officers as well as an introduction to our first, elder-appointed and commissioned class of deaconesses.

Note also the session is “introducing” this new “class” of officers. In other words, these female officers will be on a rotation just like the male officers, the difference being these new female officers were not elected. Their deaconesses were simply appointed. In his Potemkin village, Pastor Sauls relegates his congregation to the role of recognizing the superior wisdom of their leadership and joining him in his celebration.

Introductions during the congregational meeting will be quick and nevermind the Book of Church Order of the Presbyterian Church in America:

9-7. It is often expedient that the Session of a church should select and appoint godly men and women of the congregation to assist the deacons in caring for the sick, the widows, the orphans, the prisoners, and others who may be in any distress or need. These assistants to the deacons are not officers of the church (BCO 7-2) and, as such, are not subjects for ordination (BCO 17).

What it does allow is both both men and women being selected and appointed to assist the deacons.

Why is Pastor Sauls not introducing any men appointed by his session to this new office? Is this new office beneath the dignity of men? Did Sauls have trouble figuring out what to call men if he apointed them to serve in this new office alongside women? He knew he couldn’t call them “deacons.” And “deaconess” wouldn’t do, would it?

Still, he was absolutely determined to end the day with women officers and the only name he could give them without causing scandal was “deaconess.”

So out with the men. This new office would have a glass ceiling.

Then too, why the commissioning? You say, “No big deal, we commission ministry leaders and missionaries all the time.”

But what if Pastor Sauls were introducing “eleven amazing, commissioned elderesses who will partner with our ordained elders to design, implement, and lead our ministries of governance“? That the men were “ordained” and the women “commissioned” would be a distinction without a difference. Even separate and unordained, the office of elderess would be indistinguishable from the office of elder. The fact that one of the two will be held by women is merely a formality. A technicality to be cleaned up down the line.

Time heals all wounds and the day is quickly coming when such artificial distinctions as deacon/deaconess/deek like actor/actress, waiter/waitress, and chairman/chairwoman, will yield to the simplicity of the unisex title “deacon.”

If elders alone exercise authority in the church, are the deacons allowed to require a man of the congregation who is in need due to his abuse of consumer credit to cancel his credit cards? Do they have the authority to make this a condition of their providing this man and his family financial assistance? Must they go to the session with this recommendation and must it be an elder who meets with the man to communicate their decision?

When female deaconesses and male deacons are “partnering” together in the “leadership” of their “ministries of mercy,” what sort of leadership can there be when elders alone have all the authority over the congregation? Will the deaconesses and deacons only lead souls outside their congregation? Inside the congregation, will they lead each other but no one else? And if so, will their partnership in leadership flow both from men to women and women to men? We can see no other way of reading the language of “partnership” and “leadership” Sauls has used to describe the relationship between his male deacons and his new female deaconesses.

Do not comfort yourself that Pastor Sauls or his session will stop with the commissioning of deaconesses. The man who once “mistakenly” ordained a woman at Redeemer will not be satisfied until he is free to do again what he precipitously did before: until he is finally able to ordain women to church office at Christ Presbyterian Church Nashville.

Jesus rebuked his disciples for being good at reading the weather while not being able to read the times. Those who condemn us for making uncharitable assumptions, cynical judgements, or impugning others’ motives need to wake up. Feminists like to talk about the “hermeneutical trajectory” of Paul which, after much huffing and puffing, finally brought him to the summit of Galatians 3:28. Who in the PCA today could possibly claim ignorance concerning the trajectory of Tim Keller’s Redeemerites as they march on the pathway of their feminist initiatives calling the sheep to join them in the celebration of their new initiatives?

Will Tim Keller and his men be allowed to set fire to Presbyterian polity and Biblical doctrine, leaving churches smoldering as they march unopposed from New York down to Nashville? Does the PCA have no fighting generals?