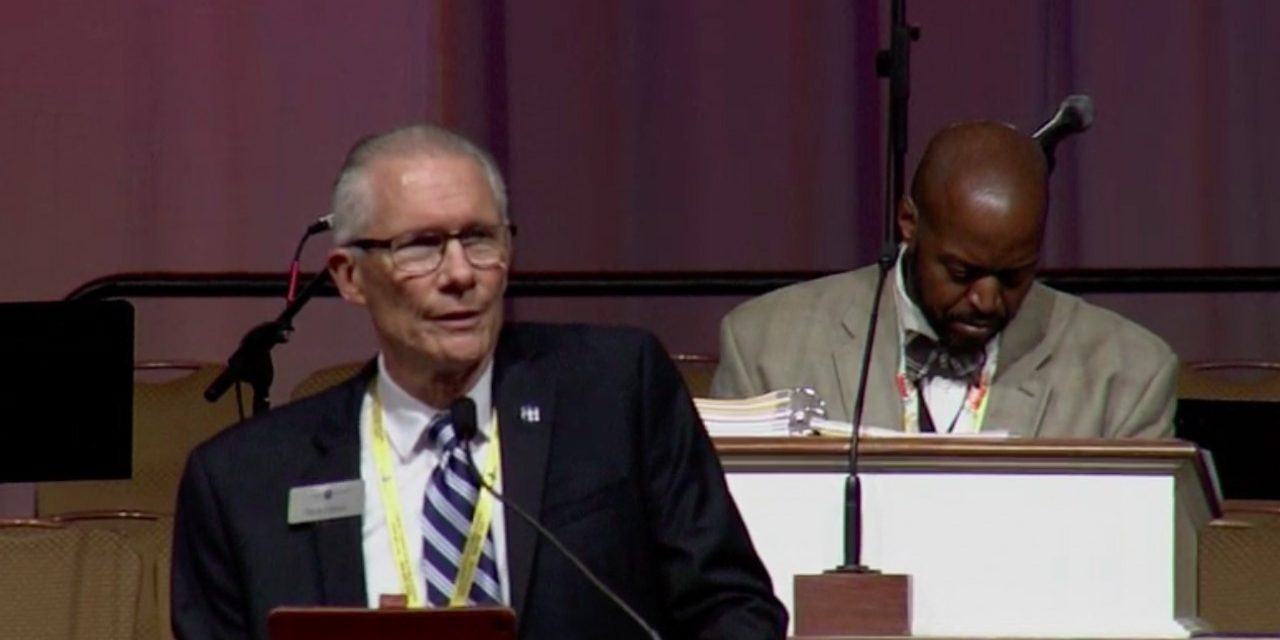 Last week the 2018 General Assembly of the Presbyterian Church in America gathered at the Hyatt Regency in Atlanta. As part of my duties as a commissioner, I sat on the Committee of Commissioners of Covenant Theological Seminary. My time in that committee has been summarized here. During our committee’s report on the floor of the assembly, President Dalbey was compelled to speak in defense of the Revoice Conference. His statement follows with my commentary interspersed:

If the conversation was healthy, it was not clarifying. CTS’s stance on homosexuality is, as we shall see, still muddy, and their responsibility (not official sponsorship) for the content and speakers at the Revoice conference—consider the participation of their VP of Academics, Dr. Jay Sklar, as well as graduates and current students—was not adequately acknowledged.

Dr. Dalbey lamented over the conference being judged before it was held and the content was known. This defense reminds me of Nancy Pelosi’s infamous statement that the Affordable Care Act had to be passed in order to know what was in it. Revoice has published extensive descriptions of many of their presentations; the main speakers’ views are extensively published and known internationally; and the pastor of the host church gave a lengthy explanation and defense of the conference.

It takes very little discernment to get a clear impression of what the thrust of the Revoice devoicing will be.

I am deeply troubled with the attacks and judgments that have been made against Covenant Seminary around the Revoice conference. Much of what is being said is untrue about us, unfair toward us, and very unloving toward us.

As I said to the CTS staff member who told me I was not demonstrating the love of Christ in my warnings and tone regarding the Revoice conference, it is necessary work for pastors to be watchmen (read Ezekiel 33). To refuse to sound the alarm when wolves are attempting to attack the sheep is to be both negligent and unloving. To remain silent or ambivalent, or to say “let’s just wait and see,” is to give a more honored place to collegiality than love for the sheep and faithfulness to God.

And it has stirred a response of fear among those who assume that if a statement is made on a blog or a Facebook group, there must be some fire where that smoke is, so some of this must be true. And it creates and fuels a hermeneutic of suspicion.

There is an easy way to change the hermeneutic. Make a clear statement denouncing Revoice’s attempt to normalize homosexual desire, affections, orientation, and identity in the evangelical church. Don’t tell us peripheral truths about CTS’s orthodoxy—that she holds to the inerrancy of Scripture and the sinfulness of homosexual behavior. Speak to effeminacy, Wesley Hill’s spiritual friendships, Side A and Side B gay Christians. Speak clearly.

Dr. Sklar gave an explanation of his participation in Revoice during the meeting of the CTS committee of commissioners. He assured the commissioners he would be teaching the historic Christian sexual ethic. He would be saying that the texts of Leviticus 18 and 20 condemning homosexual copulation are still applicable.

I responded by pointing out there are often unintended consequences from our actions. Not only does his presence lend credibility to the conference, but his scrupulously focused talk on Scripture’s prohibition of homosexual intercourse provides cover for other speakers promoting homosexual identity. Revoice is a festival of homosexual identity and effeminacy, and Dr. Sklar provides them good cover.

Here’s a simple summary of what we believe about the sin of homosexuality: Homosexual behavior is sin. Homosexual lust is sin. The temptation toward homosexual sin is not sin. Attraction to the same sex must be mortified by the means of grace and the support of the people of God, so it does not as James say[s], “conceive and give birth to sin.”

As he keeps having to address the Revoice Conference publicly, we celebrate the fact that Dr. Dalbey’s words begin to bend in a better direction. What he says here is better than what he stated in CTS’s Statement on Marriage and Sexuality. But still, by continuing to leave room for the program of Wesley Hill’s spiritual friendships and the full indulgence of gay orientation as a Christian, he demonstrates once more the specialty of seminary men to be carefully wrong.

Sure, we agree that homosexual behavior and homosexual lust is sin. Yet even more it must be said that temptation toward homosexual sin and attraction to the same sex are disordered desires that arise from within the sinful nature and fallen will of man.

Notice President Dalbey says attractions to the same sex must be mortified so they do not give birth to sin.

One of the main debates we are having today regarding homosexuality is whether desires—even desires that have been present with us as long as we can remember—are sinful. Here’s some helpful Owen on the topic:

Now, what is it to be tempted? It is to have that proposed to a man’s consideration which, if he close [with it], it is evil, it is sin unto him. This is sin’s trade: Ἐπιθυμεῖ—“It lusteth.” It is raising up in the heart, and proposing unto the mind and affections, that which is evil; trying, as it were, whether the soul will close with its suggestions, or how far it will carry them on, though it do not wholly prevail. Now, when such a temptation comes from without, it is unto the soul an indifferent thing, neither good nor evil, unless it be consented unto; but the very proposal from within, it being the soul’s own act, is its sin.1

Revoice attempts to remove homosexual desires from the realm of sin and Dr. Dalbey is careful to allow this. This is the space the gay Christian movement is seeking to claim and it will lead many to live as effeminate men and butch women, renouncing their God-given sex. Dr. Dalbey continues:

We affirm brothers and sisters who are walking in this way, whose struggle is same-sex temptation. As well as those whose temptation is heterosexual, and nonsexual temptations, including the stirring up of discord in the Body of Christ.

Dr. Dalbey equates the sin of those brothers and sisters who struggle with same-sex temptation, the sin of those who struggle with heterosexual temptation, and the sin of those who stir up discord in the Body of Christ. What a strange thing to say. What does it mean to affirm these various people who are tempted? Does it mean that you assist them in their struggle to overcome those temptations or does it mean to assist them to come to terms with the sin they are contemplating? Is the sin of stirring up discord in the Body of Christ similar to that of same-sex temptation? Is it something that some people were just born with and must manage as best as possible—for which they are not ultimately responsible?

No, Dr. Dalbey’s statement is absurd. While attempting to make the sins equivalent, his words actually demonstrate that the sin of homosexuality occupies a special domain in the Christian church today. Homosexuality is protected in a way other sins are not. Dr. Dalbey should have said we seek to see the Holy Spirit reform the homosexual in just the way we seek to see Him change the brother who sows discord in the church.

What people choose to call themselves who struggle with same sex attraction I think is a matter of significant wisdom in figuring out, but not necessarily something for condemnation if their commitment is no behavior, no lust, and mortifying the desire to not be tempted.

Words are important. Names are significant. And what words we use to describe ourselves is how we define ourselves. To identify as a “gay Christian” is to tell others that you not only love Jesus but that you sin sexually in a particular direction. It is to lift up your sinful sexual identity to the level of your identity in Christ. It is also to tell others that you have expectations as to how you wish to be treated.

In other words, it is to teach others that gay is good. Substitute any other sinful identity and the perversity of his logic is revealed: pedophile Christian; adulterous Christian; idolatrous Christian.

Dr. Dalbey says it is not that important what you call yourself as long as your commitment is to “no behavior, no lust, and mortifying the desire to not be tempted.” I think what he meant to say was mortifying the desire to be tempted or to sin. And here we reach the core of the argument today. Why not simply say mortify the desire? Such a simple clear statement is all that is necessary. However, it would be problematic for Dr. Dalbey and CTS as it would condemn much of the Revoice conference, reveal their failure as an institution in the past on this issue, and result in other men who are unwilling to speak clearly on the issue accusing them of sowing discord in the church.

In 2014 we had a Francis Schaeffer Institute lecture series on homosexuality and a pastoral response. We used the language of “same-sex attracted.” You can listen to those lectures on our website, if you’d like.

If you have problems with what I’m saying right here, right now, talk with us. Talk with me. God has given me the grace to listen, to learn, to love, and to grow from people who give pushback, and enable me to be more precisely biblical as a lover of truth, a lover of God’s people, and a lover of all those made in the image of God. Thank you.

That growth would be demonstrated to us by President Dalbey demonstrating more concern to soundly condemn the errors of the Revoice conference. We would like to see him show tender earnestness in calling those tempted to shipwreck their faith through homosexual desires to leave those desires behind.

Today is not a day for wait-and-see tactics or open-ended questions. The battle is being waged in CTS’s backyard, yet they welcome the enemy to the battlefield and provide them ammunition. No faithful soul pursuing the call to pastoral ministry wants to be trained by men whose principal gift is moderating God’s truth towards cultural palatability.