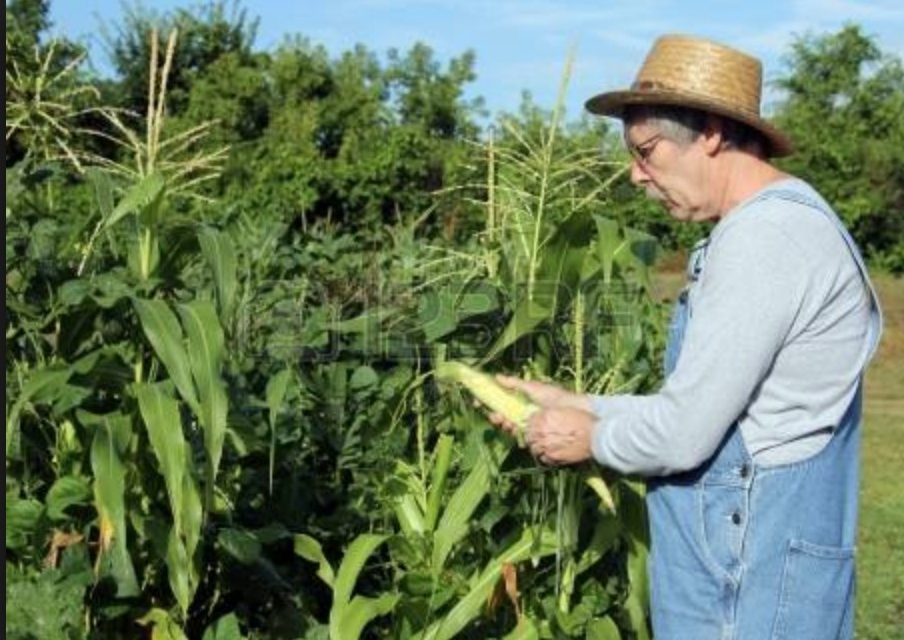 The following is a letter to the editors from one of our readers. Our correspondent, Cleatus Hogbottham, is a farmer holding membership in a rural PCA church. Mr. Hogbottham read Dr. Dalbey’s statement on the Revoice Conference and we thought our readers would appreciate his view from the pew.

by President Mark Dalbey & the faculty of Covenant Theological Seminary

In light of questions surrounding the upcoming Revoice conference to be hosted by Memorial Presbyterian Church in St. Louis, Covenant Seminary would like to provide the following statement of clarification.

A bunch of your folks who are or were from your semitary are showin out at this here conference. The conference is aiming to…uh, well, looks to me like they’re trying get folks feeling better about…er… being queer but not having queer kinds of…uh ya, know, relations.

Look. If so many from your school are supporting this thing, I’m thinkin’ the education folks ‘r’ gettin from you either didn’t protect ‘em from this tomfoolery or they got this tomfoolery from the you guys there at the semitary! Now you got to clean up that mess for me.

I want you to clearly say “homosexual temptation or orientation is a sin” or “…is not a sin.” That’d be real clear. And you said you’d clarify.

Covenant Seminary is neither sponsor nor organizer of the event.  Faculty member, Dr. Jay Sklar–whose expertise is in Leviticus–has been asked to address the relevance of Leviticus and how it supports the historic Christian understanding of God’s intent for marriage and sexuality.

So Dr. J—that’s neat that he’s there. Nice when athletes can fall back to something useful—but anyhow Dr. J shows up and tells everybody that—lessee if I got this straight—Leviticus is part of the Bible and is a Christian book that doesn’t go against the other parts of the Bible that talk about marriage.

Well…shoot me in the britches and tell me not to sit down, I never heard such an obvious statement in all my life! Took a semitary prof to do that, I guess.

As bible scholars committed to the inerrancy of Scripture, Covenant Seminary faculty are regularly asked to speak at churches and conferences, considering it a duty and privilege to share the truth and authority of the Bible in all areas of life. We believe that the unchanging veracity of Scripture is always relevant and has the inherent power to influence culture and lead people to the light of Jesus Christ.

So you all are kinda like the Extension Service at the land grant school we got down the road. That’s great—they can be real helpful, telling folks how to eat healthy and take care of children and what part of your field needs an extra dose of manure. I’m all for helping folks out. Like I say, I hope you’re speaking out here to help us out. So far I think you’re just trying to say the Bible is right which is a good thing to say I guess but it’s kinda like the Extension agent coming out to Mrs. Jones’ house and telling her it’d be a good idea if she and the children would eat everyday. Or telling me what I need in my soybean field is some beans. It’s true, but everybody concerned already knows that.

Other than that it just sounds like this feller’s throwing around a bunch of twenty-dollar words. Well I understood it says something about authority but…veracity—that from that movie about the dinosaur zoo few years back? The veracity raptor was one bad lizard. Good movie, though. Little violent. Lot of mud. Weird that he’d bring that up, though.

In the last ten years, there has been a dramatic change in society’s views and perspectives on questions related to human sexuality. In light of this reality, Covenant Seminary faculty believes it vital to offer a Scriptural view of sexuality whenever possible to serve the church and offer the hope of the Gospel to anyone who may be seeking it.

Good grief. This is worse than trying to read my 401k statement. By “views and perspectives on questions related to human sexuality” you mean folks are losing their minds over sex, right? Y’all could make the destruction of Sodom sound like the morning crop report.

By “vital” don’t you just mean “important?” Why can’t you just say important? “Vital” sounds like life and death stuff to me. And if it’s life and death I want you to do more’n just “offer.” Why don’t you preach or declare or proclaim? “Offer” is what the waitress at Cracker Barrel does with the breakfast menu when I go in at 5 in the afternoon. Sometimes I take it and sometimes I don’t and she smiles the same whether I want Momma’s Pancake Breakfast or the Chicken Fried Chicken so I give her a generous tip either way.

Hmmmm. Maybe I’m startin’ to understand your reasoning after all.

But alright. You want to tell us something. Let’s see if you can git ‘er done.

As the denominational seminary for the Presbyterian Church in America (PCA), we gladly uphold the inerrancy of Scripture, the Westminster standards, and the sanctity of marriage as being between one man and one woman. Our faculty firmly believes that God’s intent for sexuality, laid down in creation and reaffirmed by our Lord, is that it be expressed in marriage between a man and a woman (Gen. 1-2; Matt. 19:4-5). Outside of this context, sexual activity is sinful—whether heterosexual or homosexual—and requires wise pastoral care and discipline when committed by those in the church.

I think the Bible says something about “Let not him who puts on armor boast as he that takes it off.” Or some folks say “the proof of the pudding is in the eating.” Don’t tell me how strong you are or how gladly you’re gonna do something. Show me by doing it!

I still haven’t seen you say anything that anybody out there fighting about this conference would disagree with! I’m glad you’re against those…activities, but so’s everybody at the conference, right? That’s what they’re saying, anyway.

In keeping with these commitments, Covenant Seminary faculty further affirms that a Christian’s foundational identity is found in their union with Christ. At Covenant Seminary, we teach clearly and without reservation that our true identity is rooted in our relationship with God through Christ. Being “in Christ” means that we are adopted into God’s family, made co-heirs with Christ, and filled with God’s Spirit for power to live a life honoring to God. Our every encouragement is for our students to find their identity in God and to embody his character in a life of holy obedience.  To say, “I am a Christian who struggles with ‘x’ kind of ongoing temptation to certain kinds of sin,”

is part of the testimony of one’s sanctification but is not the foundation of who we are in Christ.

Ya FUMBLED IT ON THE 1 YARD LINE! If you were my son, you’d be walkin home from the game and sleeping in the doghouse tonight. You had it right there in your hands! All you had to do was walk it in but you dropped it! Son, I don’t even know who you are anymore.

Help! Say something helpful! Don’t you all train preachers to preach so we in the pew can understand? How is it that you are being so cloudy here?

Maybe you folks ought to try training politicians, not pastors. I’ve heard the state rep say stuff like this and folks eat it up and re-elect him for the umpteenth time even though he’s for killing babies and gettin’ everybody’s dog a disability check. But next time you hear from him he’s talking about loving children and makin sure everybody gets a job. Everybody’s for those things. As long as he’s standin up straight them words just run right out of both sides of his mouth. We’re all waiting for him to get a knee replacement or something so’s he might tip one way or the other and we’ll see if he leans right or left for a change.

Where were we? Oh yeah, you were about to talk about passion.

Because of our passionate commitment to God’s Word and all it teaches, we are equally passionate about sharing the Gospel with all people, testifying to them of the love, joy, peace, forgiveness and sanctification we experience when we repent of our sin and trust in Jesus. This extends to sharing the Gospel with those in the LGBT+ community, or for that matter, any community of people.

If my boy talked this much about passion, I’d send him out to pick rock on the back forty and then put up a couple hundred yards of fence. Y’all need to sweat some, maybe. That’ll take care of all that passion. Or join the army and learn something about “duty” or “responsibility.” Those are words I like to hear from folks taking care of other folks. You all got to get control of yourselves!

And there you go again not drawing any lines for us. Who in all the Christian-speaking world is against anything you just said?

Wouldn’t it be nice—wouldn’t a man be more happy—if he’d just love how God made him a man? Wouldn’t womenfolk enjoy life more if they didn’t have to go around all the time telling people how their body and mind aren’t on speaking terms?

Covenant Seminary remains faithfully committed to upholding the unwavering biblical standards on marriage and sexuality while engaging and equipping leaders to be wise shepherds, in terms of both sharing the gospel and of loving and pastoring those who are trusting in Jesus and facing temptations to unfaithfulness in these areas.  This is, after all, God’s calling: In all of life, we must hold faithfully to the Bible’s teaching as we reach those who do not yet know Jesus and as we help those who do to remain faithful to him.

That’s a big ol’ glob of words. And I still don’t know where you stand. You doin’ this on purpose? Sounds like the mission statement the factory made JD carry around in his wallet in case the higher-ups came by. Then he could whip ‘r out and act like he knew some corporate mumbo jumbo. All the employees had to memorize this paragraph ’bout customer expectations. It sounded great but nobody could follow. Anyhow then Big ‘Un (nobody remembers his name anymore but that’s okay you’d spot him right off as the Big ‘Un) asked the plant manager about it and he said if those big wigs ever come around it’d be alright for ’em just to remember the phrase “meet or exceed” and make up the rest and they’d be fine.

Why don’t ya try that? Why not just say “We’re gonna preach the Bible” and let ‘er go at that? I mean if you’re not gonna say anything, why use all those big words? Save some trees, know what I mean?

In Service of Christ,

I admit I’m not a bit clearer about you all after reading this. Got to hand it to you all. Soggy Sweat’s got nothin on this here Semitary.