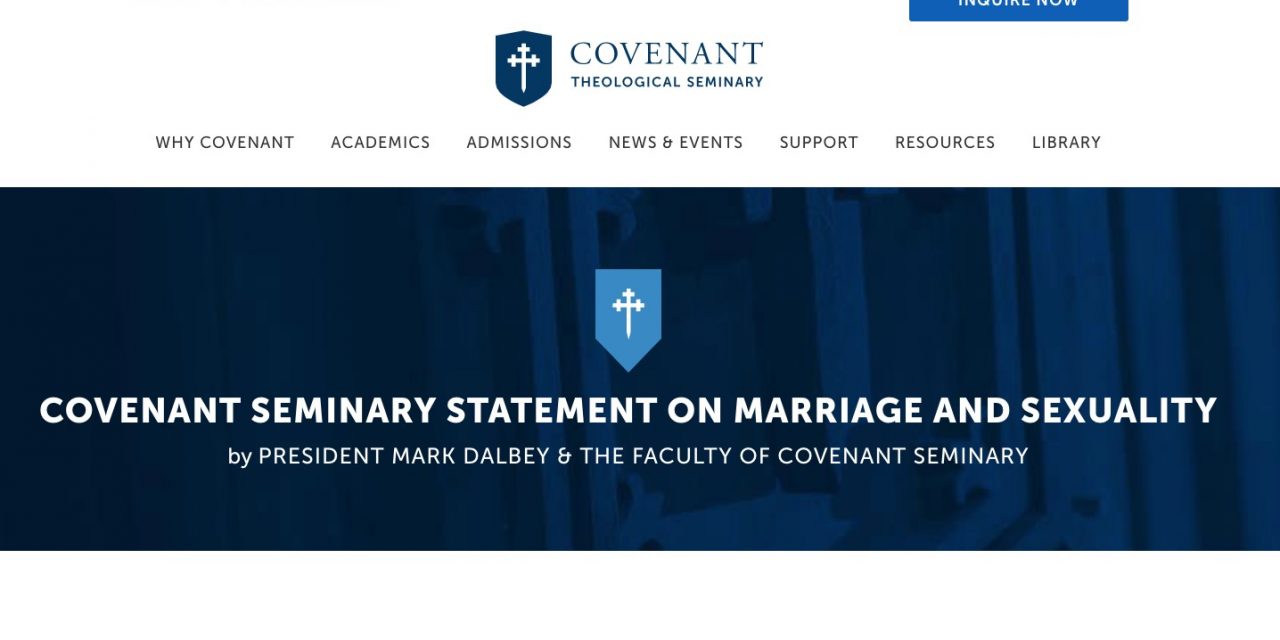 From 2001 until 2004 I lived in St. Louis’s trendy Dogtown and, most days, traveled out to the unaffordable side of town where Covenant Theological Seminary is located. Before arriving to pursue my M.Div., I spent the previous few years working in the office of Pastor Tim Bayly, who was serving as the Executive Director of the Council on Biblical Manhood and Womanhood. CBMW coined that word “complementarian” which the movers and shakers of the PCA use as frequently as possible to describe our winsome denomination. The teachings of complementarianism and the inner workings of the organization that was created to promote the complementarian vision for the church and home were very familiar to me. Jump forward to Covenant Seminary in the early 2000s…

Not only was complementarian teaching a wispy part of their curriculum, it was openly mocked by Professor Jerram Barrs. During his pastoral theology course—a required course for future pastors—he described the main publication of the complementarians, Recovering Biblical Manhood and Womanhood, as “demeaning to women.” Despite the fact that other faculty members such as Professor Dan Doriani made significant contributions to the book, Barrs felt obligated to warn his students that the teaching of that book would lead to the oppression of women.

When my Greek professor, Dr. David Chapman, commended the gender-neutral TNIV in one of our classes, I reminded him after class that the previous year’s General Assembly had warned her churches against its use. He seemed unconcerned about the General Assembly’s direction, which was eye-opening. But even more, the twisting of Scripture is never something to be nonchalant about. This came home to me as I edited a blog for World Magazine called TNIV: Stealth Bible in the mid-2000s. There may be nothing more wicked and pernicious than intentionally changing God’s Word to suit modern sensibilities.

So, you see, already nearly 20 years ago, CTS’s faculty was at odds with their own denomination’s stance on sexuality. The recent Covenant Seminary Statement on Marriage and Sexuality by President Mark Dalbey assures me that CTS and her Board of Trustees continue to be unwilling to confess Biblical sexuality or discipline those on the faculty who stray from the Bible’s teaching. In the letter he declares these commitments:

1. CTS is committed to the doctrine of inerrancy.

2. CTS holds to the Westminster Standards.

3. CTS believes marriage is only between one man and one woman.

4. CTS believes sexual activity outside of marriage, whether heterosexual or homosexual, is sinful.

5. CTS affirms that a Christian’s foundational identity is to be found in their union with Christ.

6. CTS believes that when one admits to struggling with any kind of temptation to sin that that is a part of the testimony to that person’s sanctification.

7. CTS is passionate about sharing the gospel with any community of people.

Those are all fine commitments. But what is missing? There is no condemnation of the specific teachings of the Revoice conference, which we’ve outlined here, here, here, and here, with more to come. Nor is there any admission that it is a failure that the organizing pastor as well as five other CTS graduates and students are presenters and speakers. Additionally, CTS has given credibility to the event by sending OT professor and VP of Academics, Dr. Jay Sklar, to support Revoice as one of their conference speakers.

This is quite sad. The failure of Covenant Theological Seminary to teach Biblical sexuality is responsible for Revoice and similar events like Christ Presbyterian Church’s Same-Sex Attraction Seminar. What begins as an embarrassment over Scripture’s teachings becomes silence concerning them. From there the silence is filled with the delicate voices of soft men who have been searching for a way to protect the preciousness of their effeminacy within the church. When your task as a training institution for pastors is to take the good deposit and hand it off to other men who will be able to teach, the consequences are staggering when one portion that is foundational to man’s existence—Biblical sexuality—is left out and even repudiated.

It’s true Revoice is not being directly funded or sponsored by Covenant. Even worse, Revoice is the fruit of CTS’s unfaithfulness to Scripture which has remained uncorrected for many years now.