The PCA on homosexuality: the influence of Covenant Theological Seminary…

…holding fast the faithful word which is in accordance with the teaching, so that he will be able both to exhort in sound doctrine and to refute those who contradict. For there are many rebellious men, empty talkers and deceivers… (Titus 1:9, 10)

The majority of men and women in the Presbyterian Church in America (PCA) no longer oppose homosexuality or same-sex marriage. The respected Pew Research Center documents this in its Lily-funded Religious Landscape Survey. Pew drilled down into the views of specific religious groups and denominations on a number of issues including homosexuality and same-sex marriage, and here are their findings on the men and women of the PCA.

Note the combined percentage of “accepted,” “neither/both,” and “don’t know” is 60%. Only two-fifths of PCA men and women are willing to say homosexuality should be “discouraged.”

Once again, note the combined percentage of “favor” and “don’t know” is 51%. This means less than half of PCA men and women are willing to oppose same-sex marriage.

I contacted Pew and spent some time looking at their survey questions, sample size, margin of error, etc. They were generous with their time and information. I also spoke with pastors (including PCA) and an academic with some knowledge of sample size, statistical significance, Pew, and surveys. Pew’s stellar reputation and Lily funding exist for good reason.1

The leadership of the PCA may make a weak stab at denying these findings claiming they themselves don’t agree with the responses Pew received, but if not, where is the fruit of their labors demonstrated in the conscience and public witness of those they have preached to for decades?

For this slide to Gomorrah, the PCA has no one to blame but her pastors. This state of affairs is what anyone would expect who has watched Covenant Theological Seminary for the past twenty-five years.

The men of the PCA who have led this debauch will deride Pew. They’ll tell their 285,000 sheep that there’s no need to worry—they can go back to sleep, but the sheep do so to their own peril. 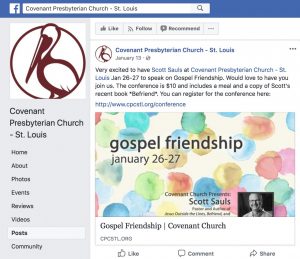 Typical of the speakers is recent Covenant grad Stephen Moss who has been privileged to have Tim Keller protege Scott Sauls promoting him nationally.

A few months ago, Sauls travelled up to St. Louis to speak on Moss’s gay Christian relationships at Covenant Presbyterian (PCA) Church – St. Louis. Sauls also brought Moss down to do his gay Christian thing in his own congregation, Christ Presbyterian Church – Nashville. It caused a bit of a ruckus, but nothing to worry about.

Meanwhile, surfing off the support of Covenant Seminary and rich PCA pastors in Nashville and St. Louis, Moss is now making common cause with the gays, lesbians, queers, questioning, and other “sexual minorities” of Revoice. Moss is announced as one of the speakers at the upcoming Revoice conference at Memorial Presbyterian (PCA) Church – St. Louis, and here’s his conference bio:

Stephen Moss is a recent graduate of Covenant Theological Seminary, and previously, he spent three years on staff with Reformed University Fellowship at UT-Knoxville. Since first sharing his story publicly in 2013, Stephen has frequently spoken and written about his experience as a Christian who is gay and celibate. He currently serves as Sexual Minority Ministry Coordinator for FirstLight Ministries in St. Louis as well as a founding board member of Revoice. Stephen enjoys hiking, good food with friends, and Broadway musicals. 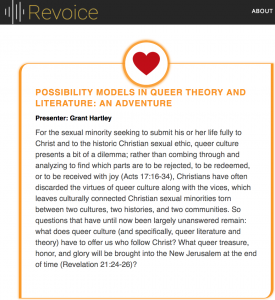 Stephen Moss and I have spent an hour or two talking together after Scott Sauls gave him a bunch of publicity at Christ Church in Nashville. I initiated the conversation in the hope of warning Stephen pastorally concerning the sinfulness of the road he’s chosen, and where it would lead. Sadly, the evils I warned him against have come to pass. Check out the Revoice conference workshops. It’s impossible to hide the degradation of this event about to be celebrated by PCA and Covenant Seminary leaders, hosted by this PCA church in St. Louis, and led by Stephen Moss. 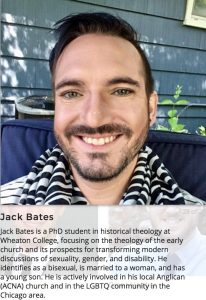 Our recent book The Grace of Shame is an expansion of the warnings Stephen Moss received. Members of the PCA who want to understand the devious tactics employed by PCA men across the denomination who follow Sauls and Moss should read this book. If you’ll permit one of the authors to say so, this book is a good preparation for the battles coming on the floor of general assembly and presbytery meetings this year and years to come.

Weep and pray for the PCA.

(For a more recent post documenting the decay in the PCA led by Covenant Theological Seminary, see this January 16, 2019 post.)

Yesterday I talked with a dear father in the PCA who had just read this post and remonstrated with me over the statistics and my laying the blame for the condition of the PCA and Revoice at the door of Covenant Theological Seminary. He was not pleased with me; and yes, I care very much about it.

First, about the stats: from the very beginning I’ve heard questions similar to this father’s—namely, that the sample size was too small to be statistically significant and that even those who did identify themselves as affiliated with the PCA likely did so inaccurately. It was these questions that caused me to contact Pew several times with specific questions, each of which they welcomed and answered graciously.

First, I questioned Pew about the accuracy of people identifying themselves with the PCA. In response, they kindly gave me the copy of the questions that had to be answered before anyone was labelled “PCA.” Those questions are included in the footnotes to this post, and have been so from the beginning. This allows readers to come to their own conclusions about the accuracy of the PCA identity in the polling. Keep in mind that each of the denominational identities would have been determined in the same way, and thus the Pew’s findings about some other denominations would also be called into question.

Second, no one has questioned Pew’s stats on other matters concerning the PCA contained on the same page as their stats on the PCA’s position on abortion and homosexuality. Say, for instance, their breakdown of the PCA by age, education, race, etc.; if Pew’s identification of survey participants’ denominational affiliation was wrong in connection with the PCA, it hardly seems possible that the errors would be limited to views on abortion and homosexuality.

Regardless of our denominational affiliation and theological tradition, Pew’s Religious Landscape Study is devastating to those of us who still believe the pulpit leads the world. Who can deny the way God has used preaching and pastoral care to lead and guide His people in past centuries? Is there any reason to believe our preachers and pastors both Evangelical and PCA are less influential today and therefore not responsible for these awful realities in our churches? Can anyone deny that it is the pastors of the PCA who are responsible for (at very best) one out of every two of the souls under their preaching and authority believing homosexuality is fine and one out of every three believing homosexual marriage is fine, also?

Readers may respond by saying, as my dear father-in-the-faith did last night, that this all does not match our personal experience of the PCA. This father, for instance, said he has sat on his presbytery’s Candidates and Credentials Committee for decades and the Pew stats don’t reflect his experience of PCA pastors or graduates of the PCA’s seminary.

I cannot argue with your experience, but I can say these stats are what I would expect from many of the PCA pastors I’ve known.

Yes, it is possible the PCA stats were off by ten to fifteen percentage points, but really, that’s no comfort—none at all. And if the death of submission to God’s Moral Law we watch sweeping across the Church in the Western World today is not the responsibility of pastors and those who train them, whose fault is it? Surely we’re not going to say it’s the world that’s the problem—rather than the Church and her shepherds? Surely we’re not going to argue the church today in North America retains her salty savor and has not hidden her light?

It saddens me that writing these things causes many to condemn us. It especially saddens me to bring pain to this father’s life at this time.

Yes, I could be wrong both in my trust of these stats and in my assigning blame to (in this particular case) the pastors and in-house seminary of the Presbyterian Church in America. It is true that many good shepherds have been trained at Covenant Theological Seminary. By God’s grace, maybe you (or your pastor) are one of them? If so, I praise God for your faithfulness, and delight in it. I know excellent men who were trained by CTS, but strangely those men are not the ones complaining we have had it wrong in what’s been written about the PCA and CTS in these Revoice articles we’ve published.

May God bless the PCA with fruit that lasts. May those men now responsible for the PCA have wisdom to do what’s necessary to clean her up. That this work needs to be done seems to me indisputable.

Remember the Apostle Paul’s words at the end of his life and ministry:

Retain the standard of sound words which you have heard from me, in the faith and love which are in Christ Jesus. Guard, through the Holy Spirit who dwells in us, the treasure which has been entrusted to you.

You are aware of the fact that all who are in Asia turned away from me, among whom are Phygelus and Hermogenes. The Lord grant mercy to the house of Onesiphorus, for he often refreshed me and was not ashamed of my chains; but when he was in Rome, he eagerly searched for me and found me—the Lord grant to him to find mercy from the Lord on that day—and you know very well what services he rendered at Ephesus. (2Timothy 1:13-18)

Here are links to 85 more posts documenting the history and leadership of Revoice, critiques of many of Revoice Conference talks, Covenant Theological Seminary’s denial of responsibility for grads and faculty who led and participated, and Missouri Presbytery’s 150,000 words in Revoice’s defense.

These Revoice posts have had well over 100,000 views here on Warhorn Media.