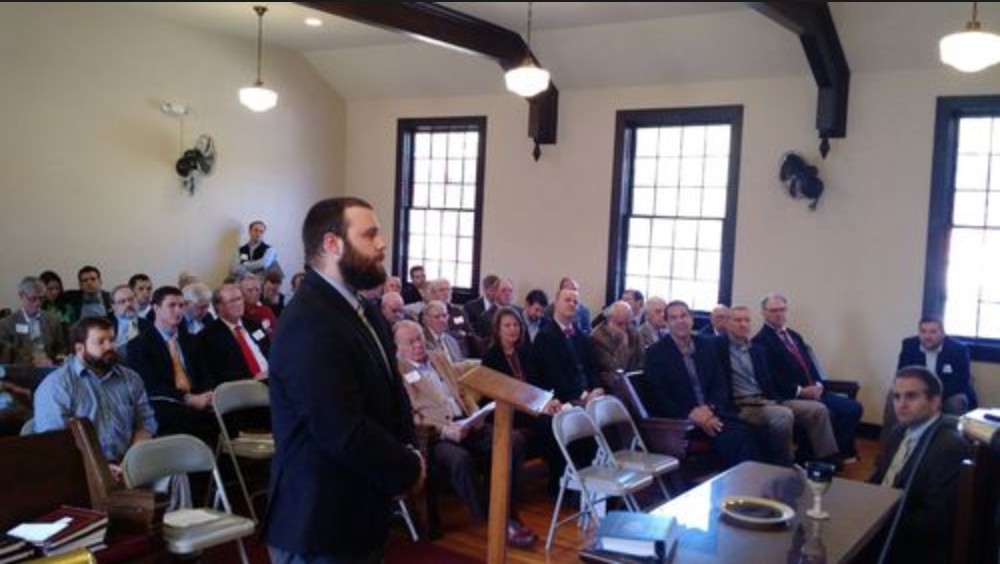 He is also head of the body, the church; and He is the beginning, the firstborn from the dead, so that He Himself will come to have first place in everything. (Colossians 1:18)

Some years back, my presbytery of the Presbyterian Church in America approved the ordination of a man who declared he disagreed with the Westminster Larger Catechism Question 136 stating that the “sins forbidden” by the Sixth Commandment include “the neglecting or withdrawing the lawful and necessary means of preservation of life.” During his ordination exam, this man stated he could not affirm the Larger Catechism here because he believed it was right to stop feeding and hydrating persons who were bedridden and had become unresponsive. Presbytery approved his exception and scheduled him for ordination and installation.

At the next presbytery meeting, the session of a church within our presbytery filed a complaint with the presbytery saying we had approved the ordination of a man who believed “murder” was okay. When the complaint came to the floor, there was much hostility against the session and its spokesman. A number of presbytery’s pastors and elders denounced the church and were particularly vehement in their condemnation of the church for using the word “murder.”

No matter the hostility against them, the session was quite right and, as the debate proceeded, those who were angry and defensive of their former action came to see they had to back down. A way forward was adopted that started with the presbytery admitting it had been wrong. Souls languishing in an unresponsive state should not be killed with a knife or starvation, and it really doesn’t matter which weapon is used. Souls who have not committed any capital offense should die at God’s decree—not man’s.

Presbytery asked me to chair a committee to meet with this man and help him change his mind. We did and he did and his ordination and installation were then able to proceed.

Tragically, not long after this presbytery meeting, one of the men who had led the defense of the candidate’s exception committed suicide. The connection between this man’s defense of “withdrawing the necessary means of preservation of life” and his own suicide was obvious and it branded on my mind and conscience the truth of American presbyterianism’s Fourth Preliminary Principle:

No opinion can be either more pernicious or more absurd than that which brings truth and falsehood upon the same level, and represents it as of no consequence what a man’s opinions are. On the contrary, we are persuaded that there is an inseparable connection between faith and practice, truth and duty. Otherwise it would be of no consequence either to discover truth or to embrace it.

There is an inseparable connection between faith and practice, truth and duty, doctrine and morals. After his suicide, it came out that this brother had been having a terrible struggle with depression. I’ve since wondered if anyone in the presbytery knew of his struggle, took his defense of starvation as an indicator of his vulnerability to suicide, and warned him against it?

The notes, signs, and assured tokens whereby the spotless bride of Christ is known from the horrible harlot, the false Kirk, we state, are neither antiquity, usurped title, lineal succession, appointed place, nor the numbers of men approving an error. For Cain was before Abel and Seth in age and title; Jerusalem had precedence above all other parts of the earth, for in it were priests lineally descended from Aaron, and greater numbers followed the scribes, Pharisees, and priests, than unfeignedly believed and followed Christ Jesus and his doctrine . . . and yet no man of judgment, we suppose, will hold that any of the forenamed were the Kirk of God.

…we do not receive uncritically whatever has been declared to men under the name of the general councils, for it is plain that, being human, some of them have manifestly erred, and that in matters of great weight and importance.

All synods or councils since the apostles’ times, whether general or particular, may err, and many have erred; therefore they are not to be made the rule of faith or practice, but to be used as a help in both.

As a help to our growth in meekness and humility, but also as a warning to our sheep, those of us who serve the church as her officers should regularly remind ourselves, one another, and our congregations of our sinfulness and fallibility. Consistories, sessions, presbyteries, synods, and general assemblies are each described truthfully by the Scots and Westminster confessions which declare “many have erred” in “matters of great weight and importance.”

If these august judicatories err in very important matters, how much more their subcommittees, commissions, stated clerks, and moderators.

Let not many of you become teachers, my brethren, knowing that as such we will incur a stricter judgment. For we all stumble in many ways. If anyone does not stumble in what he says, he is a perfect man, able to bridle the whole body as well. (James 3:1, 2)

As an officer of Christ’s Church no less than a husband and father, I have committed many errors and sins in my leadership. Many. It’s the nature of man after the Fall but I don’t say that to excuse myself.

God could have given angels to father children, husband wives, preach to congregations, and admonish and discipline sheep.

He didn’t. Don’t fool yourself.

Calvin points out that God did not put angels, but fallen men, in the pulpit of His Church so that everyone would be humbled and a sweet unity would prevail as the people of God all have to submit to being fed from the mouth of a man who is their “inferior.”

Christ is the only perfect Head of the Church.