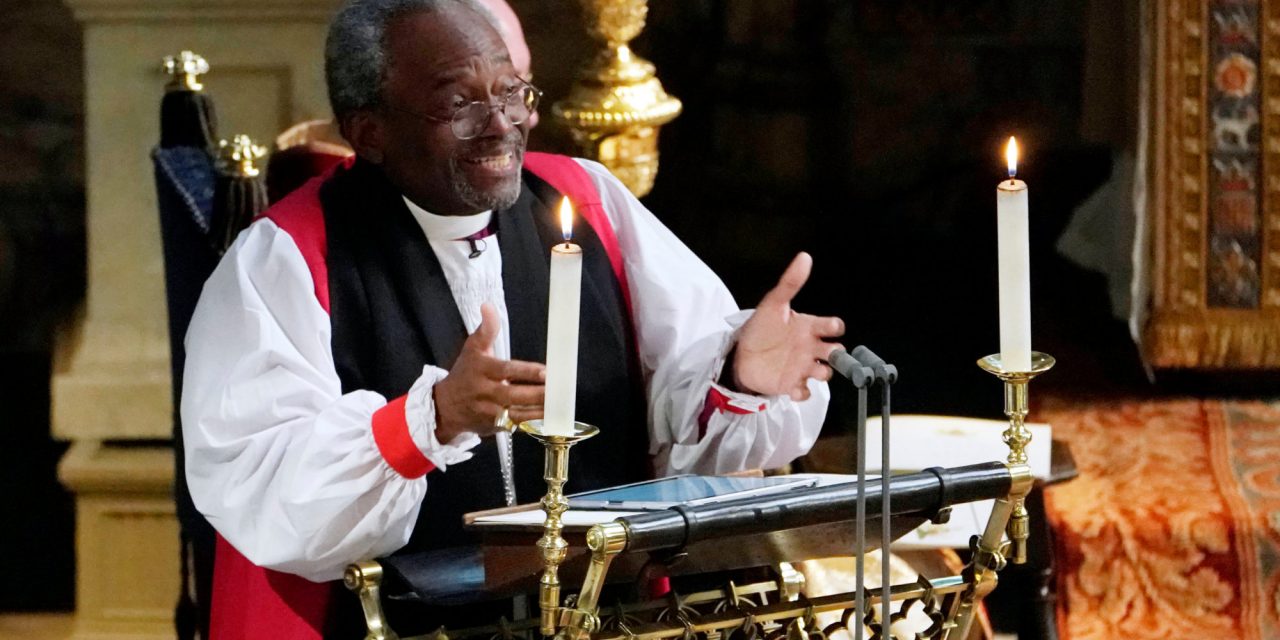 Yes, I realize that analyzing the sermon at the royal wedding is a bit like discussing the quality of the bath towels on the Titanic as she’s going under. Why would I even bother–surely there is an endless list of reasons to just turn away in shame from the whole debacle. Is the marriage even biblical? The Archbishop of Canterbury says, “Not a problem.” And we know the Church of England has always had the highest respect for biblical marriage: see here and, ahem, here. Did the vows reflect the differing duties of husbands and wives? No, of course not. What kind of character is Bishop Curry–faithful pastor or wolf in wolf’s vestments? Given the prominence of the occasion and the positive reaction across the globe the answer must be no surprise. “Woe to you when all men speak well of you, for their fathers used to treat the false prophets in the same way.” Still, having seen many Christians (and, yes, pastors) applauding the sermon…there seems to be a need to say something about the sermon itself.

A Rorschach test uses a set of 10 inkblots to probe the psychology of test subjects. How you interpret the carefully designed ambiguity in these images is supposed to tell a great deal about you.

Note: the inkblots are themselves carefully designed ambiguity. The strength of the test, so the theory goes, lies just there–the images could be of anything depending on who’s looking.

There are clever pastors who can do this with words.

Now, to be fair, any sermon can be misinterpreted and the most faithful sermons will be twisted by someone. But in that case the fault lies with the hearer not with the preacher. The best sermons are clear and unambiguous. The best sermons are divisive, driving a wedge between the truth of God and the lies of everyone else. The better the sermon the cleaner the cut.

But there are other sermons that do just the opposite. Bishop Curry has given the world a most excellent example of this kind of well-crafted inkblot sermon. “What did you think of that sermon! WOW. Imagine that–millions of people around the world watching a real worship service!! Imagine millions of people hearing about Jesus!”

Thus goes the world wide web’s social media reaction, professing Christians gleefully imagining all the good that came from millions of people hearing about the gospel.

Well, I can only imagine.

What can one say about a sermon that everyone in the world loves…and you just don’t?

So I confess that I belong to the group of three or four who just don’t like what he said. He had some good raw material: the spiritual he quotes at length is good stuff, and of course, the Bible passages were mostly really what the Bible says (but, no, Jesus never commanded us anything that could be paraphrased as, “and while you’re at it, love yourself”). But he doesn’t ever develop what he means by love and all are left to fill in that blank themselves and come away thinking they’re good.

Clearly there are highlights I love. And truly, this was just so close to being great:

That’s what love is. Love is not selfish and self-centered. Love can be sacrificial, and in so doing, becomes redemptive. And that way of unselfish, sacrificial, redemptive love changes lives, and it can change this world.

And there the Bishop stomped out the only real fire he had.

“Christ’s sacrifice” is the gospel almost. So it isn’t the gospel. When we try to cram the gospel into the smallest nutshell we think people can handle, something is going to be left out. In this case, what is it? Quite a bit, actually. Christ died for sinners because of sin, for one hugely important thing. You may have already spotted that glaring absence in the quote. And the sermon. But one other thing is missing and it’s not just been left out, it’s been outright denied. Bishop Curry just denied a key tenet of the gospel and he did it in the first sentence I just quoted. Can you see it?

He didn’t die for anything He could get out of it.  This was almost great. Imagine telling the people who have the world at their feet that Jesus didn’t die for an honorary doctorate (what surely only the preacher would care for). And going on to preaching to the most honored guests and the most adored bride and the most beloved and applauded royal high folk that Jesus didn’t die for any earthly accolade or any other earthly crown. Jesus left his crown on earth behind that He might gain a joy this world’s kingdoms can never either know or bestow (Hebrews 12:2). He died for joy.

He didn’t die for anything He could get out of it. This was almost great. Jesus our sacrifice. But He didn’t die for nothing but sacrifice pure and simple, right? Has everyone in the world been justified? Has everything been redeemed? Wincing in a sermon is good and I did wince when I watched just the first minute or so of the sermon.

If you don’t believe me, think about a time when you first fell in love. The whole world seemed to center around you and your beloved.

Wow! Not to put too fine a point on it, brother!

As the bishop said this the cameras were directed at the bride herself (dressed in white, right?) and I winced as she smiled. Everybody knows, you know? She had been in love before, right? And married, even, right? And that love did not prove to be redemptive.

The Savior gives us a model for addressing this situation, doesn’t He (John 4)? No, Jesus doesn’t stone her but He also doesn’t give her platitudes of “love is the answer” or “what the world needs now is love, sweet love.”  He names love’s sin against Love and deals with it: “you have had five husbands and the man you now have is not your husband.” And laying bare her need of the gospel He preaches it to the town.

What the royal couple needed on this point is what all those millions of viewers needed. A gospel explanation of marriage. Imagine the peace that would fill our cities if love were explained by Jesus, rather than Jesus explained by (our twisted selfish understanding of) love.

Husbands, love your wives, just as Christ also loved the church and gave Himself up for her, so that He might sanctify her, having cleansed her by the washing of water with the word, that He might present to Himself the church in all her glory, having no spot or wrinkle or any such thing; but that she would be holy and blameless.

So if the bishop had preached that text–Ephesians 5:25-27–I’d still criticize him for leaving out the previous verses on the wives being subject to their husbands.

“Husbands, love your wives, just as Christ also loved the church and gave Himself up for her.”

Imagine how Harry’s life would have been different if his own father had loved his mother this way. Who else might have been involved in the festivities of the day if that husband had loved his wife by making her more holy rather than driving her away from holiness and into an early grave? How much time would it have taken, really, to point out that Harry will have to deny himself and take up a cross to love Meghan? How much good would it have done to spend one blessed minute explaining to Meghan that obeying her husband would honor God and bring the peaceful fruit of righteousness to her, to him and to their children, should God see fit to bless them with the fruit of the womb?

Bride and Groom, like everyone else watching, know that “love” is powerful–they’ve seen it destroy enough lives already. Bride and Groom have seen through all that tripe about “love” being the answer. But the preacher got the whole world to politely ignore what everyone knows and cheerfully live in fantasy-land for 12 minutes. Everyone watching loved the sermon because they were able to walk out thinking they knew what it was all about. “Love.”

But it was an inkblot. They were able to hear exactly what they wanted to hear. Naive Christians and liberal christians heard the Bible quoted and Jesus’ sacrifice mentioned and lots and lots about love and thought, “nice sermon, preacher.” Unbelievers heard Jesus stuff, cause, that’s what they say in these places, you know, but what he said about love was so true: love is great.

A couple sits before the bishop to hear a sermon about marriage. One the son of adulterers, deprived of a mother in no small part because of “the power of love.” The other, already having broken a marriage in exchange for a career and having made a living off of being admired for her appearance and ability to pretend.

Oh, Bishop! You can forget the world for a moment. If you would just tell this couple what they need, you would tell millions what billions need.

Tags: I Feel Bad About Myself, Pastoral care