Moses’ fatal flaw and mine 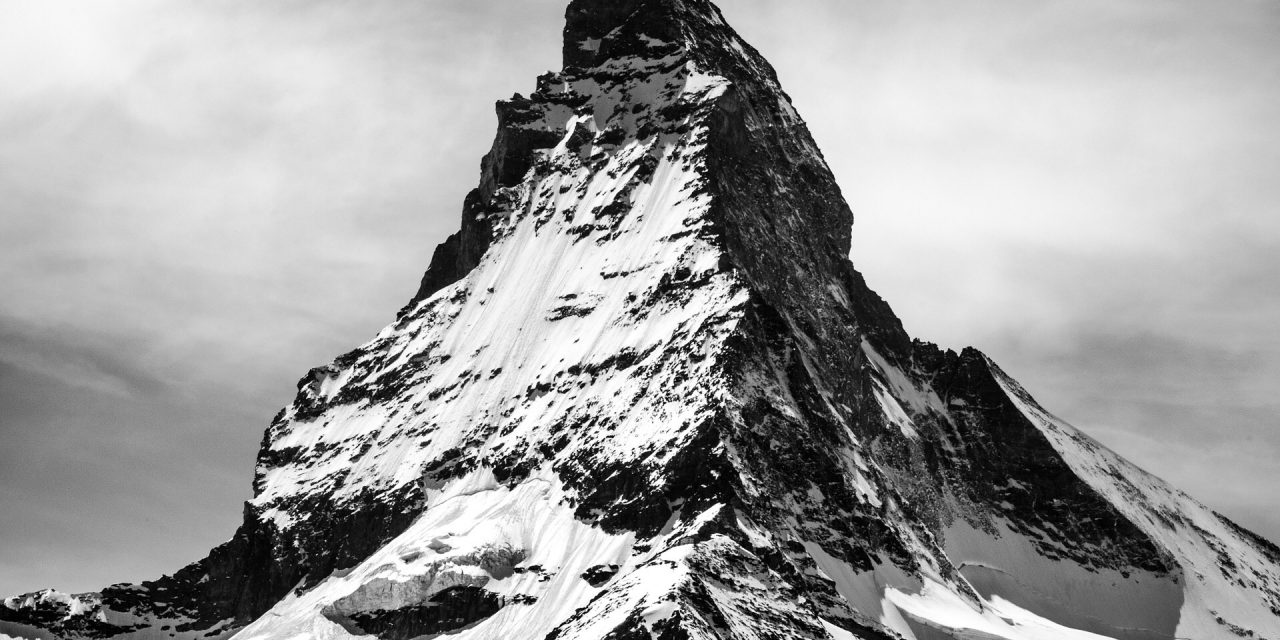 Picture this: Moses, standing on a mountaintop, a beautiful panorama spread before him. He’s looking at the Promised Land, and after 40 years of aimless wandering in the wilderness, it’s gotta look pretty good to him. He’s been waiting on this day for a long, long time. It’s a land flowing with milk and honey, a land that comes ready-made—it is already cultivated and tamed. And God is preparing to hand it to His people on a silver platter.

If anyone deserved this next chapter of prosperity, it’s Moses. He’s been on the receiving end of so much griping and rebellion and accusation from the Israelites…it’s enough to drive the humblest man on earth to distraction. It’s enough, in fact, to trigger a hissy fit—the kind where you yell and scream and hit things. For the most part, though, Moses has kept his cool these 40+ years, praying for his ragged people, leading them in obedience, and even interceding on their behalf when God wants to wipe them off of the face of the earth.

But instead of proceeding in to the Promised Land, God has something entirely different planned for Moses.

Death, to be exact.

Do you ever get mad at God when you’re reading the Bible? I do. This is one of those stories that rankled in my heart every time I read it. It just seemed so unfair. Ever since I became a mother, Moses has felt like a kindred spirit. God put him in charge of a rag-tag group of the whining-est children that ever were. And Moses wasn’t exactly jumping for the opportunity. In fact, he was off minding his own business, tending sheep on a far-off mountainside, when God gave him an assignment that would turn his world upside down.

Now, let’s head back to that mountaintop where we left Moses looking out over the Promised Land. God gave him a glimpse of the land they were about to enter, but He did not allow Moses to experience it. Why? Here’s what God said to Moses:

Now in order to understand that, we need to go back, once again, to another day in the life of Moses, years before. God had been leading His people through the wilderness, faithfully providing for their every need, proving Himself to them time and time again. But the people of Israel got thirsty at a place called Meribah. They didn’t see water, so they came to Moses and told him they wished they were dead. I kid you not.

Moses had just lost his sister Miriam, and despite outward appearances, just under the surface he was seething. And who could blame him?

Moses went to God and fell on his face, and the Lord told Moses to take his staff and go before the people and tell a rock to yield water. So he took his staff, and gathered up the people before this rock, as God had told Him to do. But then, Moses lost it. He opened up his mouth, and here is what came out:

“‘Hear now, you rebels: shall we bring water for you out of this rock?’ And Moses lifted up his hand and struck the rock with his staff twice, and water came out abundantly, and the congregation drank…” (Num. 20:10-11)

And that was it. That’s the little hissy fit that got Moses excluded from entry into the Promised Land. It seemed a little unfair to me. After all, Moses had just lost his sister. He was grieving. And these Israelites were beyond ridiculous. I don’t know how anyone could put up with it. God Himself got pretty angry at them. Moses was just demonstrating a little righteous indignation, right? And these people weren’t just sinning against Moses, but against God Himself.

I was reading this story to my children recently when the scales fell from my eyes. The weight of my own sin hit me full-force as I saw, for the very first time, the wickedness of Moses’ actions. You see, Moses wasn’t just tired and angry. He didn’t just hit the rock. He didn’t just call them rebels, a word that was certainly justified under the circumstances. Here’s what he said:

With one little word, we, Moses turned the situation on its head. He put himself level with God, and acted like the people’s sin was a personal affront to him. He acted like he himself was providing water for them out of a rock. “Shall we bring water for you out of this rock?” When Moses said “we” it’s unclear whether he was referring to himself and Aaron, or himself and God. But either way, he’s making it all about himself. In Moses’ words, the people’s sin is against him. And the water comes from him.

But here’s what God said to Moses after he sinned:

“Because you did not believe in me, to uphold me as holy…”

And again right before Moses’ death on the mountain,

“…You broke faith with me… and you did not treat me as holy in the midst of the people… You shall see the land before you, but you shall not go there, into the land that I am giving to the people of Israel.” (Deut. 32:51-52)

When I finally understood the nature of Moses’ sin, I found myself crying. And here’s why:

I never wanted to see the nature of Moses’ sin because I am so guilty of that same sin. As far as we know, Moses committed this sin one time. And yet, I commit it nearly every single day.

When my children are whining and complaining or rebellious, I make it all about me. When I think I am displaying righteous indignation, I’m really elevating myself to a level with God. Like Moses, I feel like their whining is the straw that broke the camel’s back. Like Moses, I think,

“After all I’ve done for you, this is how you treat me? Here we go again…”

I justify myself for losing my temper. I make excuses for myself, and point toward extenuating circumstances. I catalog all the sins of my children that brought me to this breaking point. Even worse, like Moses, I am guilty of the sin of unbelief. God has given me instruction of how to guide and instruct and correct my children. But I do not believe that God will work in the hearts of my children and fulfill the promises He has given about them—that He will soften their hard hearts to obedience, that He will bring water from a rock.

Like Moses, I am given the responsibility to shepherd the souls of a motley crew of children who are often rebellious, often complaining. I go through the motions of discipline and discipleship because that is what God commanded me to do. But I do not treat God as holy in the midst of His people.

This is not some little sin, some small lapse in judgement, some momentary weakness. This is my pride, my ungratefulness, my rebellion. This is a violation of the first commandment, and the third too. If this sin excluded Moses from entry into the Promised Land, then what does my sin deserve?

When God opens my eyes to the depth of my guilt, that is when I best understand His holiness. That is the grace of God to me, to recognize and mourn my sin.

“We have not feared thee as we ought,
Nor bowed beneath thine awful eye,
Nor guarded deed, and word, and thought,
Rembering that God was nigh.
Lord, give us faith to know thee near,
And grant the grace of holy fear.
…
When shall we know thee as we ought,
And fear, and love, and serve aright!
When shall we, out of trial brought,
Be perfect in the land of light!
Lord, may we day by day prepare
To see thy face, and serve thee there.”

Moses did not gain entry to the Promised Land that day. He died on the mountaintop and was buried there by God Himself. But Moses was brought out of trial and made perfect in the land of light, and not by his own merit. If he was undeserving of entry to the Promised Land, how much more the final Promised Land—the City of God? And yet, Moses too was redeemed by the blood of the Lamb, forgiven for his sin. That very day he became a citizen of Heaven.

Thank God that we are dressed in the righteousness of Christ. We cannot justify ourselves, but God does justify us. We are undeserving citizens of Heaven, despite our unbelief. Despite our anger. Despite our failure to follow God’s instructions.

“Hallelujah, what a Savior!” 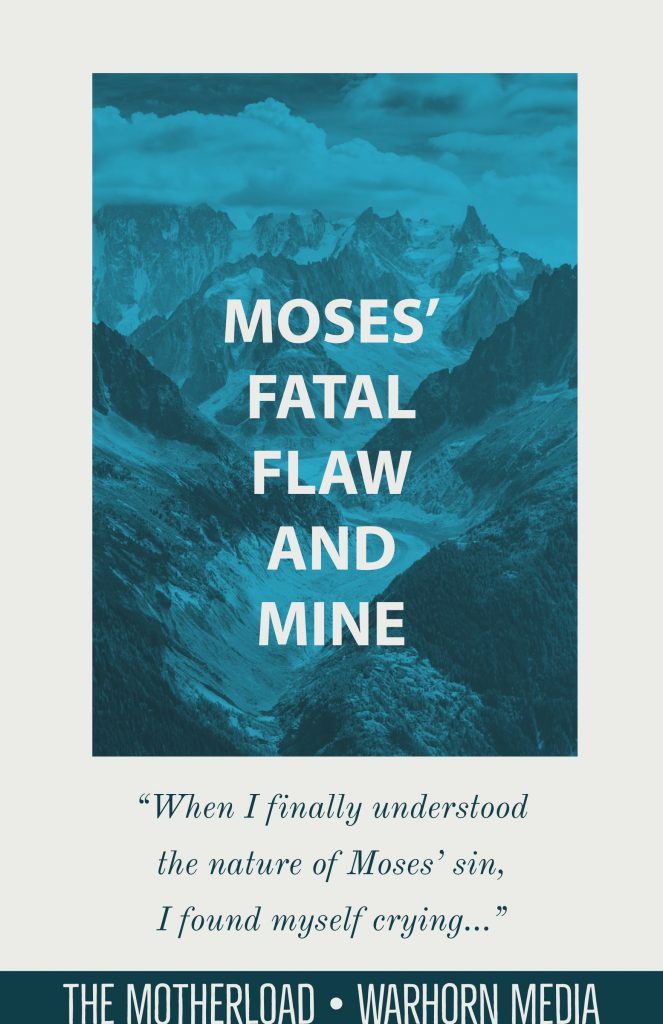 Tags: Death, I Feel Bad About Myself, Kids, Motherhood