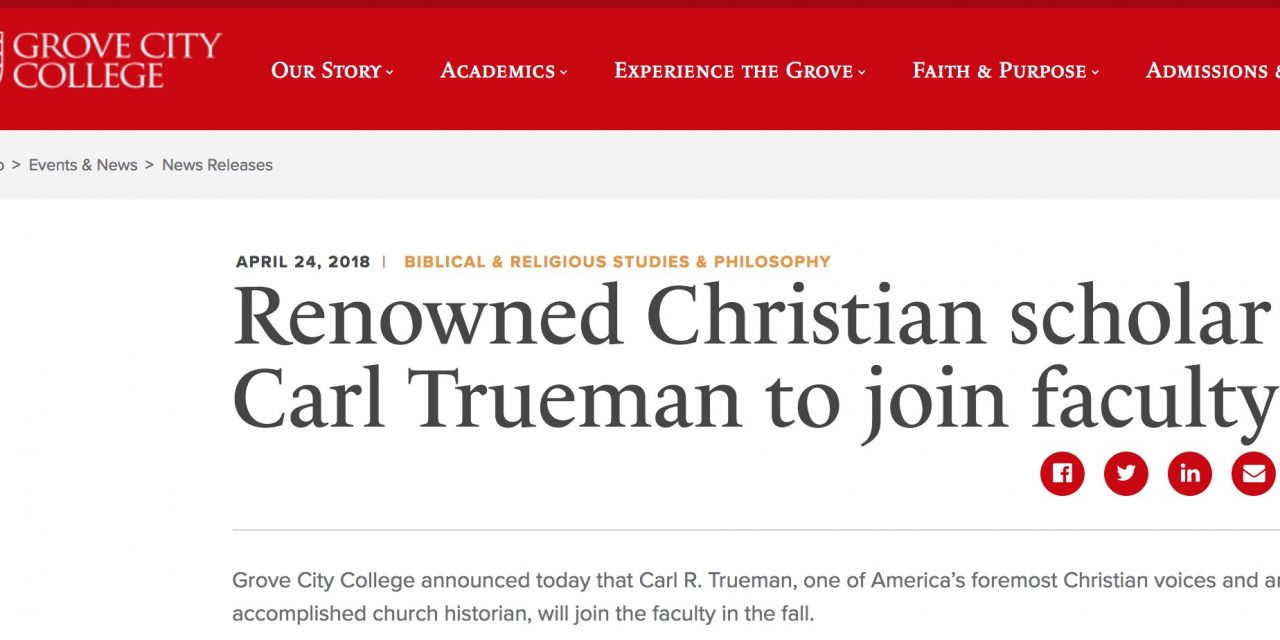 Grove City College announced today that Carl R. Trueman, one of America’s foremost Christian voices and an accomplished church historian, will join the faculty in the fall.

Before leaving junior high school, you learn the cool kids are rich and they are bullies.

Junior high is the best lens to use watching guys like Tremper Longman, Peter Enns, and Carl Trueman. In the Reformed world, there are a number of guys like Longman and Trueman whose principal work is cultivating New Calvinist groupies for their cliques. When they mock the fuddy-duddies who quietly believe and teach what Scripture says, they know they’ve hooked him when the neophyte laughs. The Corinthians laughed and laughed and laughed at the super-apostles’ mockery of Paul’s brand-marks of Jesus.

Once at the PCA General Assembly, I watched Tremper and his hipster church-planter sycophants sitting around a table in a bar. A few minutes earlier, some of Tremper’s groupies had taken the mic on the assembly floor to mock Scripture’s doctrine of sexuality. I was scandalized by their public rebellion against the Word of God, so it was nauseating to see Tremper holding council with them afterwards.

You won’t be surprised this was the last time I attended the PCA General Assembly. The sight of this hipster and his acolytes made me realize it was all over for the PCA. Before leaving for Westmont in Santa Barbara, Longman taught at Westminster and I couldn’t imagine my friend Vern Poythress1 having to be collegial with him. Talk about opposites! Start with humility and pride, then add original and derivative thinking.

Sure, Trueman, Enns, and Tremper get published, but academic publishing is the same as publishing for the masses. It’s a popularity contest. Chesterton put it well when he commented that this sort of scholarship is merely a giggling excitement over fashion. Leithart is another one of these guys. His circle of acolytes is a little different but the game’s the same. At least Peter has some original thoughts.

A word to the wise from a pastor who knows higher education, the Christian celebrity circuit,  and publishing.

Have nothing to do with the cool kids. Don’t read them. Don’t listen to them. Don’t look at their pictures. Don’t even read other people arguing with them. Before you know it, they’ll be gone and their place will remember them no more—whether it’s Santa Barbara or out in the hinterlands of northwestern Pennsylvania.

Any man who rides the wave of heterodoxy or heresy is boring. And only more so if he’s also bad on sexuality2. I mean, can you imagine anything more derivative?

And about their highly-vaunted doctorates from this or that degree-mill? My friends who are real academics at real research institutions getting published by places like Cambridge laugh at doctorates. They point out that doctorates are what a bad scholar gets because good scholars are promoted before finishing them. The really good scholars at Oxford have no doctorates. Like Lewis. Like Frame.

One other thing. Always remember that false doctrine walks hand-in-hand with bad morals.

Something helpful from Jude:

But you, beloved, ought to remember the words that were spoken beforehand by the apostles of our Lord Jesus Christ, that they were saying to you, “In the last time there will be mockers, following after their own ungodly lusts.” These are the ones who cause divisions, worldly-minded, devoid of the Spirit. But you, beloved, building yourselves up on your most holy faith, praying in the Holy Spirit, keep yourselves in the love of God, waiting anxiously for the mercy of our Lord Jesus Christ to eternal life (Jude 1:17-21).

[This post has been edited to remove an indirect warning about feminists liking women in order to highlight this very direct warning from Jude.]