Five Corrections for Your Impertinent Child 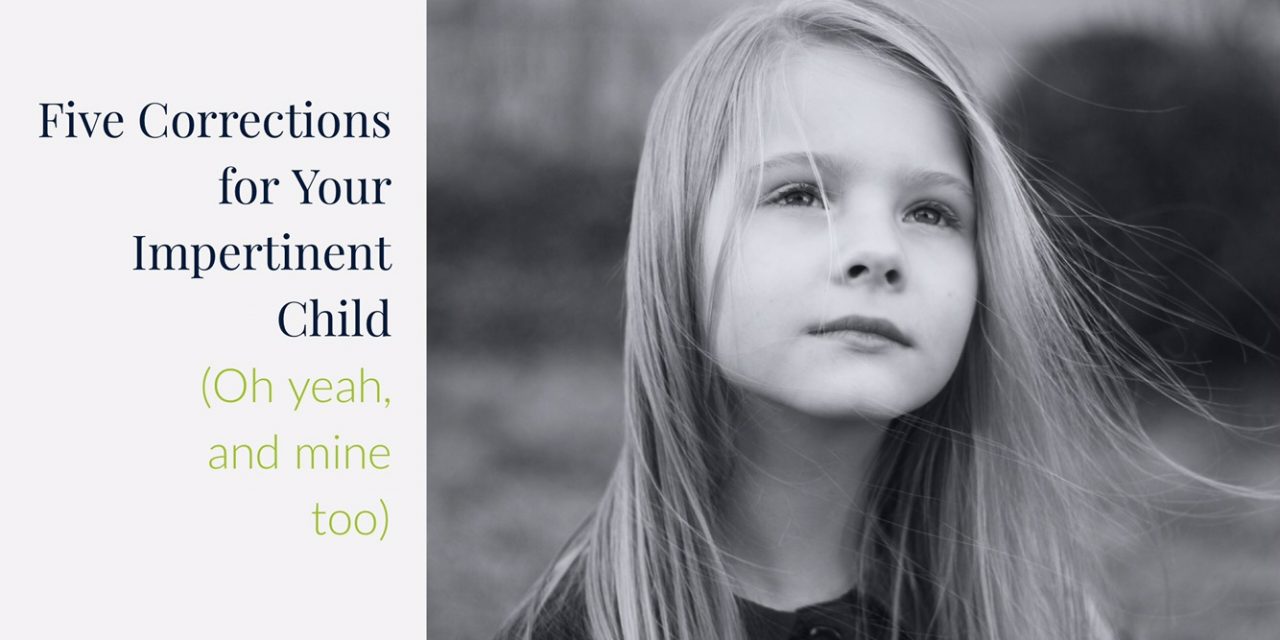 Last week I talked about why it’s important to train our children to be respectful. Now let’s talk about what that might look like, at different ages and stages.

When I told my husband Ben that I was working on a list of phrases and corrections that we use in our home when our children are disrespectful, he objected with a laugh, “But it isn’t working!”

It’s true. We’re still very much in the throes of addressing this sin in our home. And we will be for years to come. The point isn’t that these are magic phrases that will take the place of discipline or instantly eradicate the problem behavior. The reason they are helpful is that they are quick ways to diagnose what is wrong—almost like a handbook. As a parent, I grow so weary of judging between squabbling siblings, explaining reasons for everything, or analyzing a problem in our home. I get discernment fatigue. Or something.

As I mentioned before, often we don’t correct disrespectful behavior in our children simply because we can’t quite identify what is wrong with it. It’s just annoying. But it isn’t just annoying. So I hope this list will help you diagnose quickly what is wrong, and explain it more easily to your child.

In 1 Timothy, Paul instructs Timothy “Do not rebuke an older man but encourage him as you would a father…” It’s interesting that this comes just five verses after he says “Let no one despise you for your youth.” So Paul tells Timothy to treat older men with deference, even when they definitely need to be corrected. If Timothy needed this instruction, how much more our snotty kids?!

99% of the time when a child corrects or contradicts an adult, it needs to be remedied. The main thing to pay attention to is your child’s tone and motivation. Kids are very motivated to correct adults, because they want to prove something—independence, dominance… whatever it is, it ain’t good. This type of attitude is just plain ugly, and kids don’t grow out of it. Have you ever caught yourself correcting some measly detail in a story your spouse is telling? I know I have. We all like being right. And we all like pointing it out when someone else is wrong. We don’t allow this type of nit-picking between siblings, either. It’s just belittling.

I was playing a game recently with my cousin (a young adult), and my son. My turn came and I accidentally made an illegal move. My cousin very sweetly said, “Is that allowed?” I realized my mistake, and then I was really amused by how politely she had pointed out my error, as if she herself wasn’t quite sure (believe me, she knew). But when I thought about it again later, I realized she wasn’t just being tactful. She was setting a beautiful example of respect and deference. Even though I was breaking the rules!

If your child is in the habit of always making his opinion known, do him a favor and help him break the habit. There are so many circumstances in life where it just isn’t our place to offer our opinion, and it’s only destructive to do so. Sometimes it’s none of our business. Sometimes it’s above our pay-grade. Sometimes we are uninformed and it’s just better to keep our mouths shut. Kids need to learn this early, or they become insufferable know-it-alls.

One of my sons takes after me, and definitely has to fight the temptation to be a know-it-all. Over the years, we’ve learned to use Proverbs 3:7 in many circumstances: “Do not be wise in your own eyes.” It’s amazing how Scripture has the ability to cut directly to the heart of what went wrong in our hearts and then came out our mouths.

As kids get older, we more often involve them in making decisions. But kids, even teenagers, need to learn the distinction between when their opinion is asked for, and when it isn’t.

Sometimes, only clarification is needed. Something along the lines of,

“Papa and I are going to decide and you’re not going to help this time.” Or,

“I’m sure you’d love to go to Tennessee for Spring Break, but it isn’t your decision.” But sometimes, it calls for a reproof.

As parents, we bear the responsibility to set an example of pure speech and godliness for our kids. There are so many times when I need to repent before them and say, “I’m sorry. Don’t follow my example in that.” Or, as my father used to say, “Do as I say, not as I do.”

There are also times when it is appropriate for an adult to say or do something that is not for a child to say or do. Words are tools. You wouldn’t give a razor to a two-year-old, but it’s fine for him to see it in use.

As a parent, we might say that doing such-and-such would be stupid and foolish. Next thing we know, the two-year-old is walking around the house chanting, “Stupid! Stupid! Stupid!” It’s ok to tell a child he may not say something, even when you have no intention of dropping it from your own vocabulary.

Sometimes it is good for siblings to correct each other. A little peer pressure helps us keep the kids in line, and we need all the help we can get, right? But, it isn’t the job of a six-year-old to discipline his five-year-old brother.

Again, it all boils down to motivation. If we notice one child upbraiding another, or constantly nit-picking his actions, or speaking with authority that he just doesn’t have, tell your child, “That’s not your job.” It’s simple and easy for a child to understand that they’ve stepped into the role of a parent in a way that isn’t appropriate. This is another good one to use when a child corrects a parent.

I hope these five corrections help you quickly identify and treat the weeds that pop up in your children’s hearts and speech. Like I said, the work is on-going and difficult, but diagnosis is half the battle. 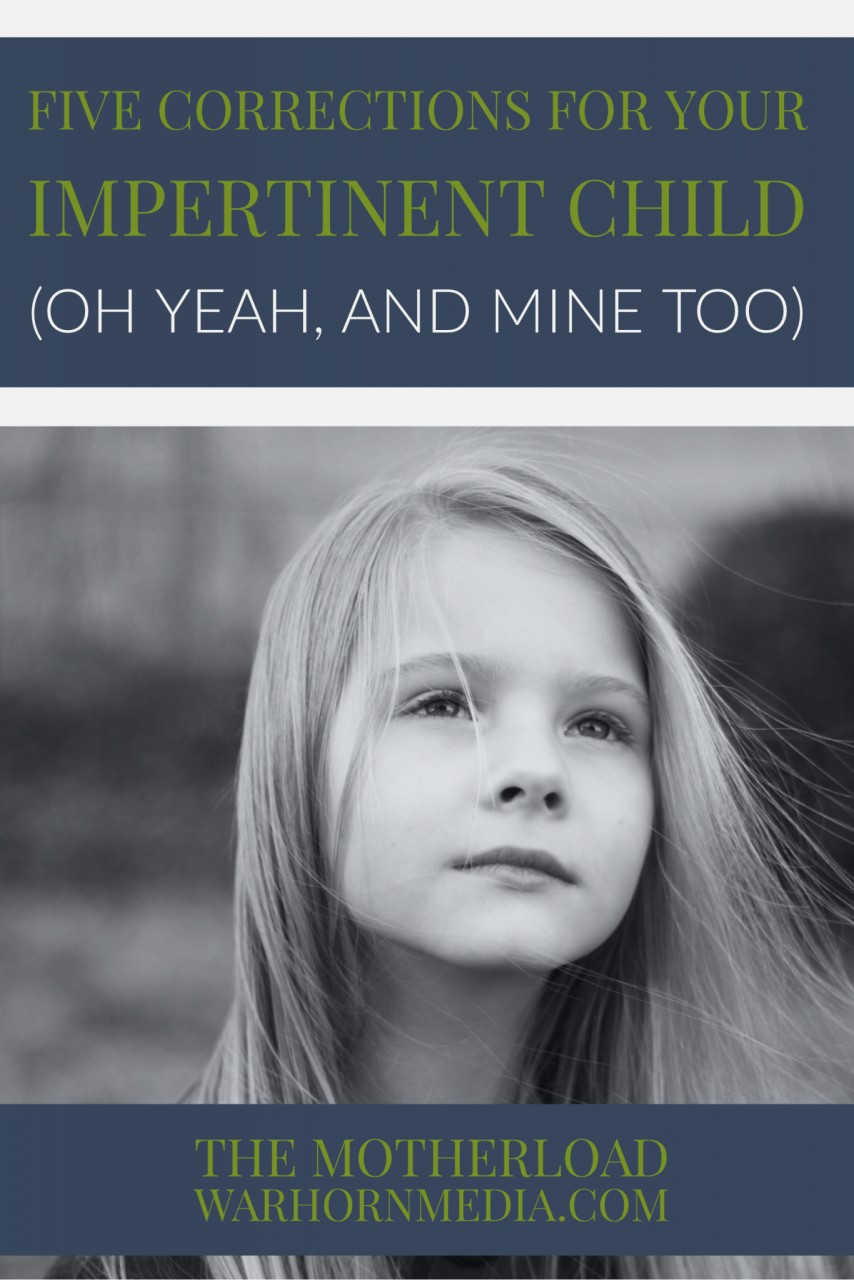