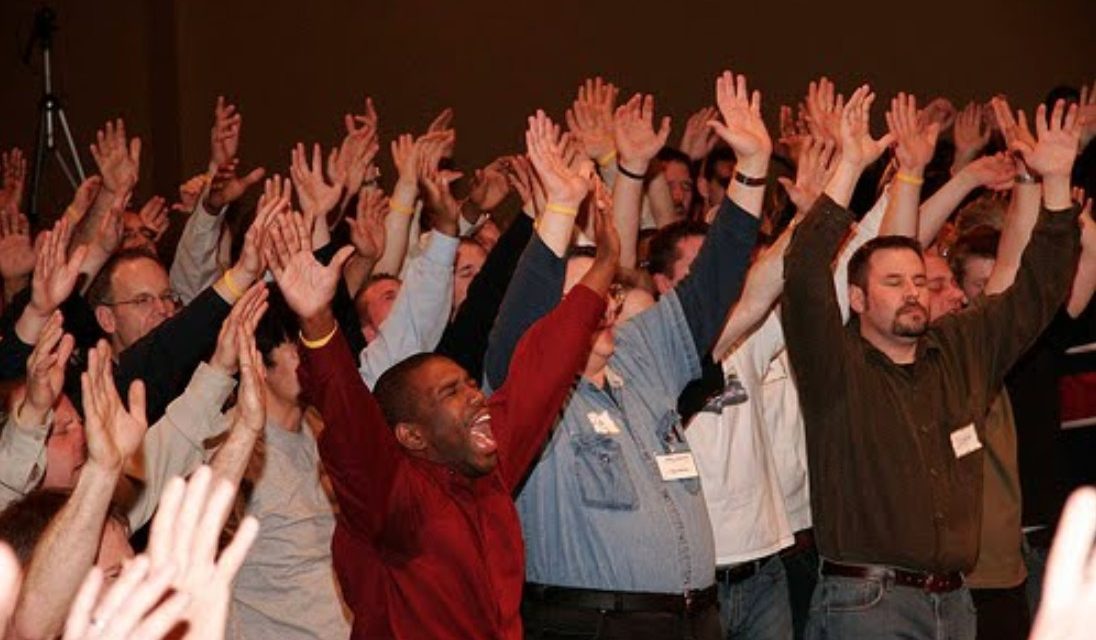 Yet many of the priests and Levites and heads of fathers’ households, the old men who had seen the first temple, wept with a loud voice when the foundation of this house was laid before their eyes, while many shouted aloud for joy, so that the people could not distinguish the sound of the shout of joy from the sound of the weeping of the people, for the people shouted with a loud shout, and the sound was heard far away. (Ezra 3:12-13)

Many men coming out of baptist or broadly evangelical homes and churches came to equate the superficiality of the music they had endured with the superficiality of the religion they had endured. Repetitious music led by contemporary instrumentation were the handmaids of me-and-Jesus religion, so as they embraced the church and her sacraments, they also embraced old music led by old instruments.

Then the push was on to get everyone singing in four-part harmony. New hymnals were put together whose focus was on reclaiming the olde. Enough effort was put into the hymnals and learning parts that, in time, most of the souls in these churches were able to sing their parts and fit in. Some even were able to stand out.

There were souls who discovered they had natural singing abilities they’d never known before. Learning their parts and realizing they had a voice that could pierce the darkness, their chest-buttons popped as their superior voices carried others in the congregation who were not so superior in their musical gifting.

Singing old songs with old instruments in four-part harmony was understood to be part of a larger package deal that also included infant baptism, weekly celebration of the Lord’s supper, the forms and repetitions of Anglican prayer-book worship, a trivium-based education, Anglican collars and robes, pipes and cigars, scotch and bourbon, Harris Tweeds, and bowties.

So here’s the drill. To fit into our churches, you have to be committed to relearning everything olde because our churches have become ghettos.

Problem is, one museum doth not a culture make. And that’s accepting the argument that the meaning of the Gospel is the pursuit of the millenium (which I myself don’t accept).

If the church is to be reformed today, we must not give in to the timeless temptation well-illustrated by the old saw about “all an Englishman’s preferences being a matter of principle.”

We could have long discussions about each thing listed above, starting with infant baptism and weekly communion. But I’d like us to think for a second about that seemingly insignificant one, four-part harmony. I think it’s a usurper to the throne. (And before we proceed, let me state for the record that I can do it with the best of them. I know many hymns by heart, not simply the words but at least three of the parts.)

There are many problems with the supposed “recovery” of four-part harmony, beginning with the fact that it’s no recovery of the singing of the reformers. They repudiated the complicated music of Rome just as they repudiated the idolatry of Rome’s weekly mass.

Because they were determined to restore the common man to the worship of God and the common man can’t read music or sing pretty. The common man sings but he sings ugly. Which is to say manly. The common man starts with being manly. That’s sort of key to understanding him. Loving him. His musical gifts are as rough as his calluses and as blunt as his forehead. He grunts. He burps. He sweats. He stands.

If he sings tenor, it’s a matter of great pride to him. It’s something that makes him stand out from other men and he shows it off during worship.

This was not what the reformers were aiming for when they reformed medieval worship. They broke the chain holding the Bible to the pulpit, keeping it from this man. They threw out the Latin, restoring the vulgar tongue to the prayers of the people of God. They cancelled weekly celebrations of the mass by priests. They said this man himself was a priest—so said Hebrews. They took off the fancy-schmancy threads of the prissy priests, bishops, cardinals, and popes. They denied that the Sorbonnists’ scholarship was needed to understand the meaning of Scripture. The reformers’ doctrine of the perspicuity of Scripture was the death of scribal scholasticism in the understanding of God’s Word and truth. They locked the doors on the monasteries and sent the men home to marry and change diapers.

Eminent reformation scholar Steven Ozment was not being a male chauvinist or channeling his inner toxic masculinity when he titled his book opening up the restoration of Christian fatherhood at the center of the Reformation, “When Fathers Ruled.” Today the obvious must be stated: the Reformation was the restoration of blunt-force manhood to Christian doctrine, Christian worship, Christian education, and the Christian home. The reformers condemned effeminacy and went for the men. And the women followed.

What’s needed in the church today is not prissiness in doctrine or worship or clerical clothing or singing. What’s needed is the restoration of manhood. Real manhood. In all its smelly, direct, forceful, blunt, hard-edged, conflictual manliness.

In our homosexual world, let’s focus on bringing working men back to Jesus. Instead of four-part harmony, let’s set our sights a little lower. Just two-part harmony.